“THE NEW PRISON DOCTOR IS APPALLED BY MY CONDITION” 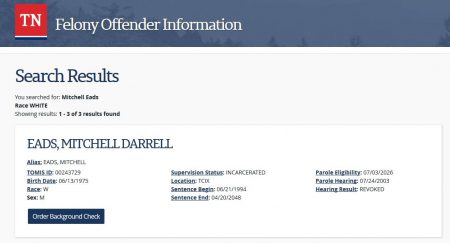 (Jun. 27, 2018) — On Wednesday, The Post & Email received a letter from an inmate at the Turney Center Industrial Complex (TCIX) in Only, TN describing a horrific attack resulting in life-altering facial and dental injuries which he claimed went untreated.

Further, inmate Mitchell Eads, #243729, said that after he filed a grievance over deprivation of emergency medical care, he was retaliated against by his jailers, his personal property stolen, and he was ultimately denied the surgery which could have made a difference in his quality of life thereafter.

It does not appear that the assault occurred at TCIX, one of Tennessee’s 14 prisons.

[Editor’s Note: The inmate’s letter, which follows below, contains graphic descriptions of an assault and its aftermath which some will find extremely disturbing.  It is not suitable reading for children.  The Post & Email has withheld one paragraph of page 3 for editorial reasons.]

The letter begins in timeline format and alternates between the present and past tenses. “In January 2018 I was a model prisoner working in a very hard to earn and coveted minimum wage industry job,” the letter begins. [sic]

The second paragraph states that on January 6, 2018, Eads was “struck from behind with a homemade club across the left side” of his face. “It shattered my face,” he continued. “My orbital socket and my oral maxillary plate ‘where your upper teeth set’ were shattered. I was assaulted further by 5 black males ‘gang members,’ kidnapped at knifepoint and held hostage while they attempted to make me call my fiance and pay them $250. They succeeded in extorting $150 from my cellie and I have access to the electronic transfer info.” [sic]

The Post & Email has received numerous reports from inmates and their relatives of frequent extortion by prison gang members using contraband cell phones to make their threats, with lives hanging in the balance.  Last year, WSMV in Nashville reported having spoken with “several families of inmates housed at Trousdale Turner Correctional Center who say they routinely pay ‘protection money’ to make sure gang members don’t kill their loved ones.”  The relatives provided receipts for the payments they claim to have made.

Trousdale Turner (TTCC) is Tennessee’s newest prison and was the subject of a WSMV four-part series one year ago during which irregular medical intervention procedures, rampant gang activity and brutality on the part of correction officers were reported.

Eads further wrote that despite the horrific attack, he was not placed in segregation or what is known as “PC,” protective custody.

He alleges that during his relocation to another prison, his personal property, whose value he places at approximately $3,000, was confiscated and has not been returned.  In June of last year, MCCX inmate Grenda Ray Harmer reported the confiscation and “destruction” of his personal property and clothing after he was relocated from SCCF to MCCX, although he later wrote that belongings which survived were returned to him gradually.

Eads’s January 10, 2018 entry reads that at 3:30 in the morning, he was “transferred 500 miles across the state to another prison instead of being given surgery. The new prison doctor is appalled by my condition and orders immediate surgery. I didn’t get to see the surgeon until January 30. The bones had already healed in place. I was denied surgery.”

On February 25, Eads wrote, he filed a grievance over the Tennessee Department of Correction (TDOC)’s failure to provide him timely medical care, after which “retaliation began in earnest. I was given a false disciplinary charge, segregated, my wedding with my fiancé was permanently canceled, my fiancé was permanently removed from my visitation list and barred from all prisons, I was denied notary services and legal library services, I was illegally placed on Administrative Protective Custody and I am denied any procedural due process in getting off Protective Custody…”

Eads summarized his current situation with:

I do not get my mail, I get no help from anyone, I have none of my personal property and cannot replace it. I have post traumatic stress disorder, nerve damage in my face, my teeth are severely out of alignment, my sight in my left eye is blurry now, my sense of smell and taste are severely diminished and I smell and taste things that aren’t there, I cannot eat a lot of foods now that require chewing. I have been brutally victimized and maliciously retaliated against.”

On the last page of his letter, Eads reported that he filed a federal lawsuit in U.S. District Court for the Middle District of Tennessee naming TDOC Commissioner Tony Parker and the TDOC as defendants. “I do not know if the lawsuit will even make it to the court,” he wrote.

As of this writing, we were unable to locate the lawsuit in the federal PACER system. 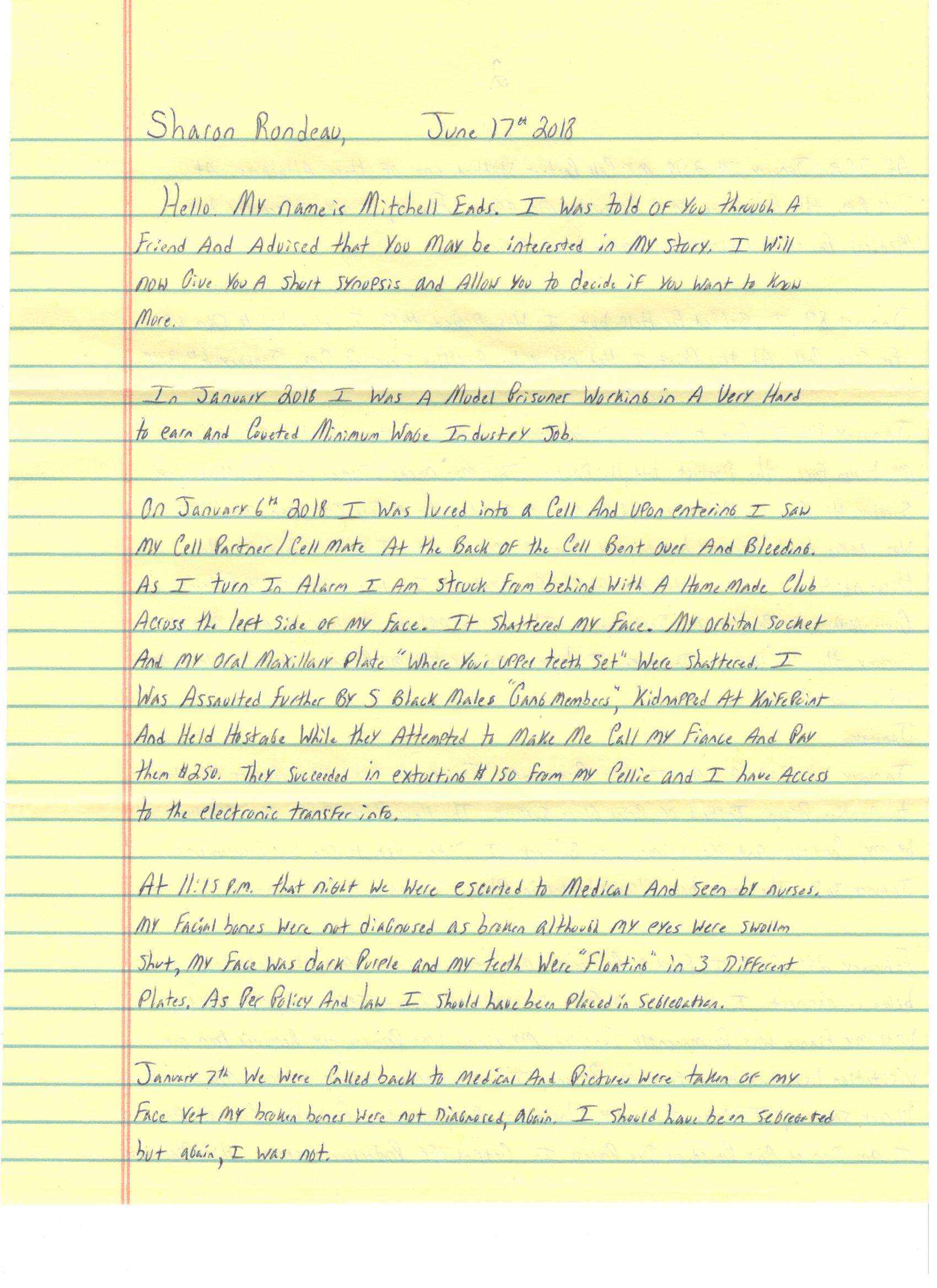 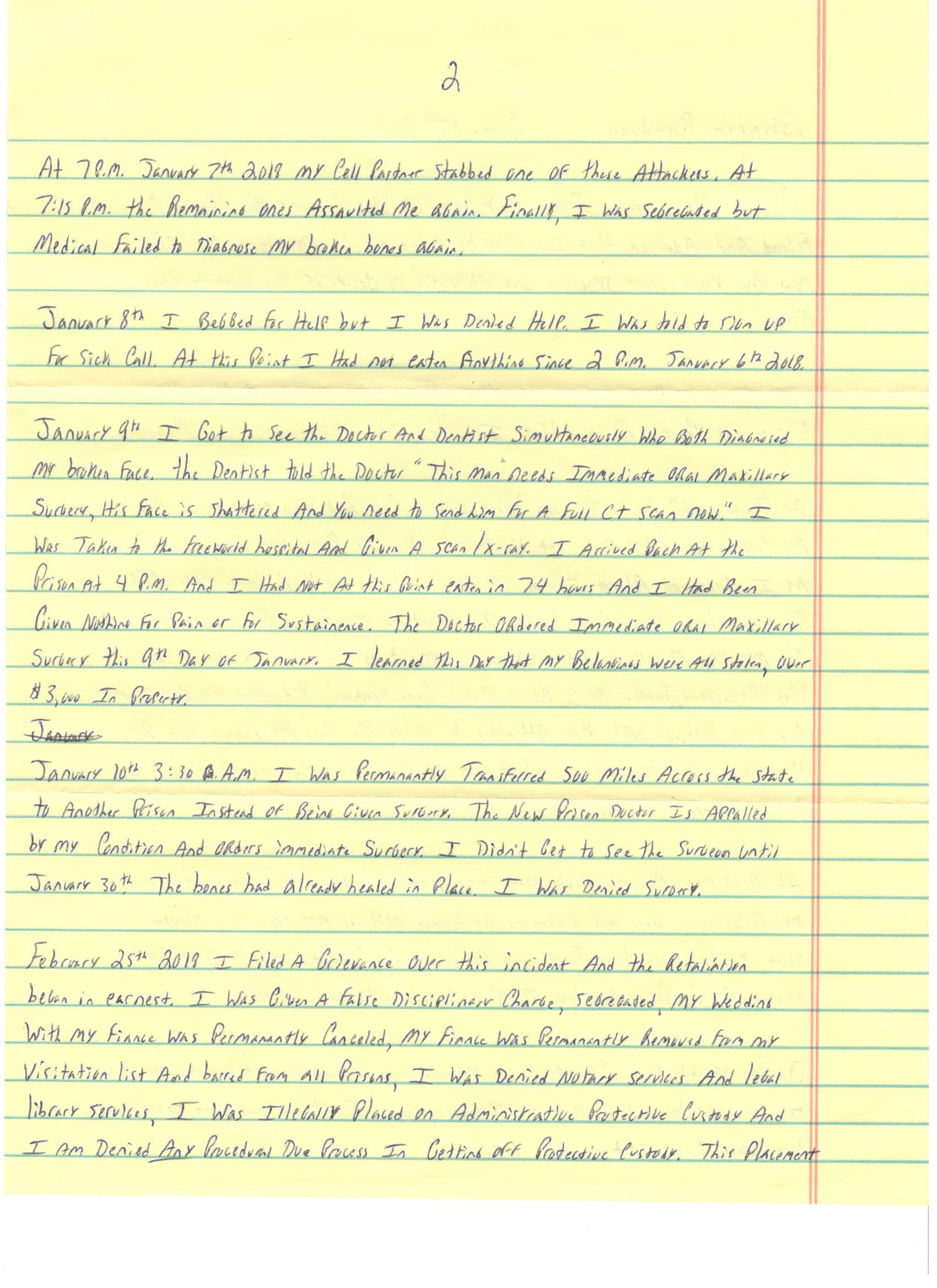 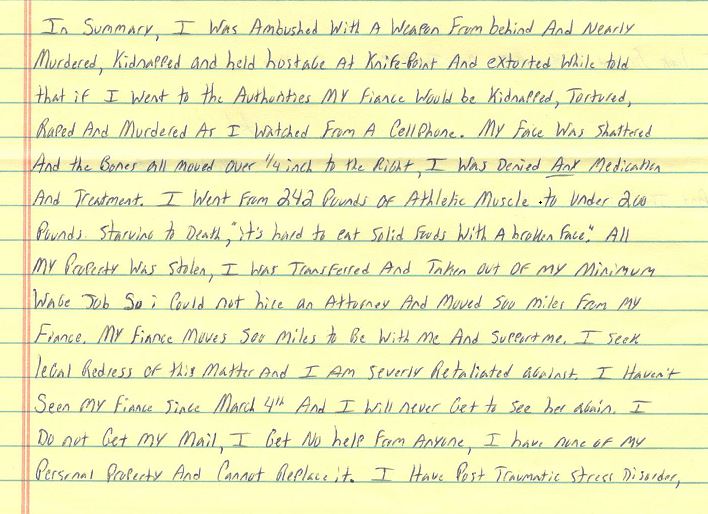 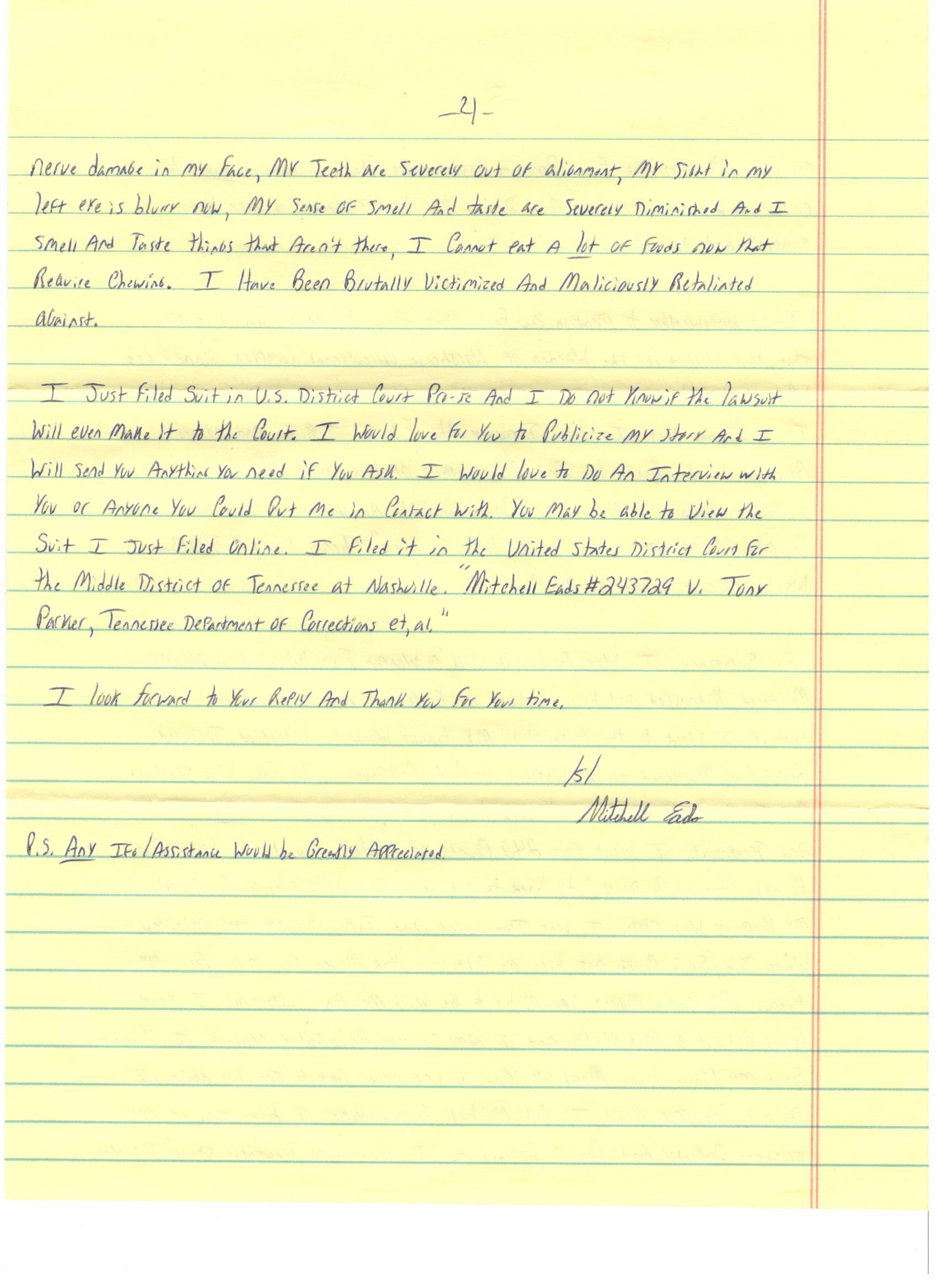