Hannity: “We Have a Lot of New Evidence” in DOJ/FBI “Corruption” 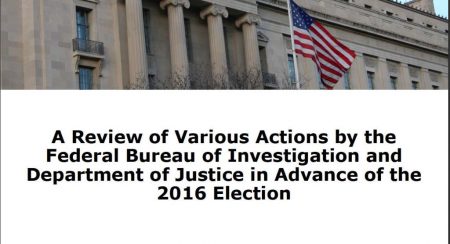 (Jun. 14, 2018) — In his Thursday “Opening Monologue,” commentator Sean Hannity opined that the DOJ’s inspector general report on the FBI’s handling of the Hillary Clinton private email server released earlier in the day is a product of “the swamp” and promulgates “unequal justice.”

He said that the report confirms his reportage over the last several months regarding former FBI Director James Comey; a two-tiered justice system which he said favored Clinton and allowed her to escape criminal charges for sending classified information over the insecure email server while she served as secretary of state; and an “abuse of power and corruption” within the DOJ and FBI.

Hannity, who remained in Singapore for the week rather than chance missing the release of the much-anticipated report while in the air, then said that “we have a lot of new evidence” relative to the conduct of the FBI in regard to the Clinton probe.

He did not further elaborate.

Hannity has previously said that as many as 28 FBI agents are “lined up” to testify to Congress as to their observations of what occurred within the Bureau relative to the Clinton investigation.  The FBI agents, however, want congressional subpoenas to avoid retaliation by the FBI top echelon.

Points made in the IG’s report with which Hannity agreed are that one-time FBI counterintelligence deputy Peter Strzok and former FBI attorney Lisa Page showed political bias toward Trump while working on “sensitive” investigations, including the “Russia” probe of the Trump campaign.  “We will stop him,” reads a text message exchanged between Strzok and Page, referring to Trump’s possible ascendancy to the White House.

IG Michael Horowitz also said that Comey’s conduct in exonerating Clinton on his own in a July 5, 2016 presser amounted to “insubordination.”

Five FBI agents were reported to have accepted favors in the form of event tickets and other perks from members of the media in exchange for information leaks and were quoted as having made politically-charged comments about Trump supporters.  Horowitz recommended that their actions be investigated further.

The report also confirms that Barack Hussein Obama was “one of 13” individuals communicating with Clinton over the private email server, although he told CBS News that he discovered Clinton’s means of doing business “in the media.”

Former Attorney General Loretta Lynch and Comey were also found to have used private email accounts to conduct government business; Comey in the report released Thursday and Lynch through emails released through FOIA lawsuits filed by Judicial Watch and other watchdog organizations.

2 Responses to "Hannity: “We Have a Lot of New Evidence” in DOJ/FBI “Corruption”"