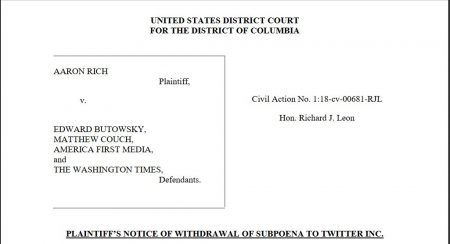 (Jun. 11, 2018) — On Friday, The Gateway Pundit reported that Twitter had received a subpoena from attorneys representing Aaron Rich, the brother of slain DNC Data Director Seth Rich killed in Washington, DC nearly two years ago, for production of communications concerning TGP and at least one of its writers as well as numerous other parties.

In late March, Aaron Rich sued Texas businessman Ed Butowsky; America First Media Group and its founder, Matt Couch; and The Washington Times for alleged defamation by publicly connecting him and his late brother to the 2016 transfer of thousands of emails from the DNC server to the open-government organization Wikileaks.

On Monday morning, Butowsky’s attorney in the suit, Ty Clevenger, reported on his blog, with supporting documentation, that the June 1, 2018 subpoena issued by Aaron Rich’s law firm, Boies Schiller Flexner, LLP, was withdrawn on Sunday.

Clevenger termed the subpoena “frivolous and unenforceable.”  The request to Twitter had included all tweets and direct messages from the accounts of Jim Hoft, owner of The Gateway Pundit; Couch; Kim Dotcom, a New Zealand resident who claims to have direct knowledge that Seth Rich was a source for WikiLeaks; WikiLeaks’ founder, Julian Assange; former informal Trump adviser Roger Stone, Jr., and others.

In addition to reporting that the subpoena was withdrawn, Clevenger’s blog post presented several theories as to how Aaron Rich “is paying $1,000-per-hour law firms to carry out their litigation campaign” when Rich’s parents said they did not have the funds to pay for a private investigator after questions about their son’s death by gunshots on July 10, 2016 remained unanswered by the DC Metropolitan police for a number of months.

Aaron Rich’s lawsuit against Butowsky, et al is the second the family filed against the businessman who employed former Metro Police Detective Rod Wheeler on their behalf as a favor. In mid-March, Joel and Mary Rich filed a lawsuit against Fox News, Butowsky, and reporter Malia Zimmerman for alleged “extreme and outrageous” behavior which they said caused their deceased son to be labeled a “criminal and traitor to the United States,” according to The Hill.

In his blog post on Monday, Clevenger stated that attorneys across the political spectrum have deemed the parents’ lawsuit “frivolous,” although he did not elaborate on the identities of the attorneys.

To this day, Rich’s death remains unsolved. Couch’s organization, which employs former FBI agents and other intelligence professionals, has been conducting its own investigation and reported in late March during a trip to Washington, DC that it was making progress.  It was during that week that Couch learned that Aaron Rich had sued him.

Despite Dotcom’s claims to have been personally “involved” with Rich in transferring the data from the DNC to Wikileaks, he has not been interviewed by the DC Metro Police nor by Mueller, to whom Dotcom offered to testify in May 2017.

Just days before his attorneys wrote to Mueller, Dotcom threatened the Rich family with a defamation suit of his own if its members continued to portray him as dishonest in the media.

In early 2012, Dotcom was charged by the US Justice Department with wire fraud, copyright infringement and other crimes stemming from his launch of a file-sharing website, Megaupload. Thus far, Dotcom has successfully fought extradition to the United States while pursuing claims against authorities in New Zealand.

In September 2012, former New Zealand Prime Minister John Key issued a public apology Dot.com in connection with surveillance the government carried out on him which was later deemed to be illegal. Dotcom also obtained a private settlement last year from local police for the raid on his rented mansion, and other legal actions are pending.

In an interview with Dutch television the month after Rich was killed, Assange strongly implied that Rich was a Wikileaks source but maintained the organization’s policy of never revealing nor confirming its sources. At the same time, Assange offered a $20,000 reward to anyone coming forward with information leading to the arrest of the Rich’s killer.

The mainstream media has called the theory of Rich’s involvement one of “conspiracy,” the same term which one of Aaron Rich’s attorneys used in a response letter to Clevenger on June 2.

After reading Clevenger’s blog post, The Post & Email contacted him at the email address he provided to ask if the cancellation of the Twitter subpoena affects only his communications or those of all named parties. We also asked whether or not to his knowledge Twitter had been notified.  Clevenger’s response, received almost immediately, reads, “The withdrawal covers all of the accounts. I forwarded the notice to Twitter, but I have not yet received a response.”

We also contacted Hoft and BSF spokesman Eddie Evans and are awaiting their responses.

Update, 2:30 p.m.:  Just after press time, Hoft responded that he had not been notified by Twitter that the subpoena was withdrawn.