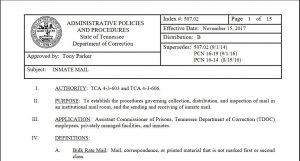 (Jun. 10, 2018) — In late April, an inmate at the Trousdale Turner Correctional Complex (TTCC) in Hartsville, TN contacted the CEO of CoreCivic, the private company which owns and operates the prison, with complaints about mail delivery.

Jeffrey Johnson, #105994, specifically pointed to “no mail room” as the underlying cause of what he said is the mishandling of his “privileged legal mail” and presumably that of other inmates.

CoreCivic-operated institutions in Tennessee are subject to the oversight of the Tennessee Department of Correction (TDOC), whose Administrative Policies and Procedures allows for special handling of inmates’ “privileged mail.”

Policy #507.02 initially contemplates that each prison has a mail room and sets forth a separate category for “privileged mail,” which is also sometimes referred to by inmates as “legal mail.” A description of “privileged mail” is located on page 2 of the 15-page section and reads:

Further evidence that each prison is assumed to have a mail room appears on page 3 of the policy:

Previous to receiving Johnson’s correspondence approximately ten days ago, this publication was aware of many reported problems at TTCC, which is Tennessee’s newest and has been open for just under 2 1/2 years.  Among inmates’ and their relatives’ complaints are use of unnecessary force by correction officers, sexual assault of both inmates and corrections staff, severe short-staffing, inadequate and cold food, insufficient protective-custody units, unmitigated gang activity, and very limited access to the facility’s law library.

In his April 25, 2018 letter to CoreCivic CEO Damon Hininger, Johnson cited Administrative Policy #507.02, stating that he “should have been afforded my legal-mail the same day it was received at the facility; and should have not been required to wait more than twenty four hours before being in signed receipt of receiving it.” [sic]

Johnson wrote that instead, “…On the day of April 20, 2018, I received legal mail from the United States Department of Justice, as received from Charlie Bravo Unit Case Manager Muhammad; who opened the mail prior to bringing it to me, and without my consent.”

Johnson additionally supplied us with an “Inmate Mail History” log printed on May 29, 2018 consisting of 132 entries as of that date.  The log shows that Johnson’s outgoing correspondence between August 21, 2017 and May 29 has been directed to the U.S. Justice Department; the TDOC; numerous Tennessee state representatives; Tennessee Attorney General Herbert H. Slatery, III; Gov. Bill Haslam; Hininger; the Tennessee Department of Health; TDOC Commissioner Tony Parker; and “CoreCivic headquarters,” among other parties.

Other entries indicate incoming mail from the Justice Department, the Tennessee Board of Parole, and Office of the Tennessee Attorney General.

On page 2 of the letter, Johnson wrote that receipt of legal mail “has become a systemic day to day problem, because there is no mail room, and the reliance to ensure that inmates receiving legal mail is a extra burden that is placed upon, already stretched unit team members, who already can’t facilitate their own job duties; that requires them to be able to aide and assist in our need; whether the need is acclimating and adjusting into the system, or the preparation for our impending release back into society.” [sic]

The letter continues, “The point that unit team members are being required to wear so many different hats here at Trousdale Turner Correctional Center, both deprives the inmates you are sworn to protect and the general public [sic] One point is that because there is no Mail room, where inmates are allowed to have access, deprives and denies inmates the ability to ensure that their legal-mail is being properly handled, and logged in as being received, by the inmate, and logged out, as out going privileged legal mail; when being mailed from the facility to any legitimatize legal entity as described in TDOC Policy 501.02 Access to Court/ Legal Counsel.”

Policy #501.02 appears to have been removed from the Administrative Policies and Procedures.

At the bottom of page 2, Johnson suggested a remedy for the breach in policy regarding inmate mail. “… I would suggest the Trousdale Turner Correctional Center, seriously look into utilizing some of it’s available unoccupied space, and set up a fully functioning and staffed mail room, On the compound that is accessible to the inmate population at scheduled times daily, and through out the week for mailing out packages.” [sic] 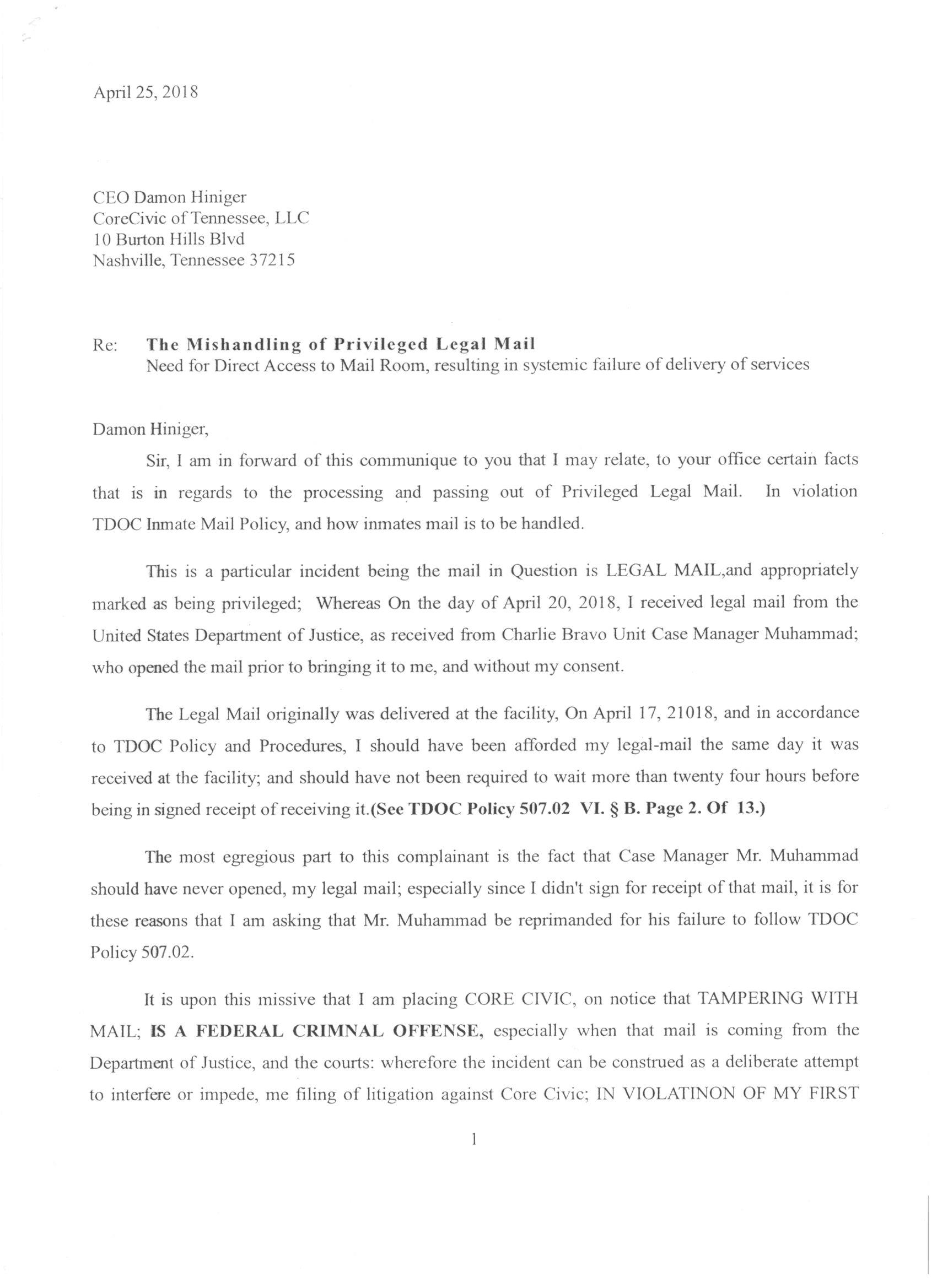 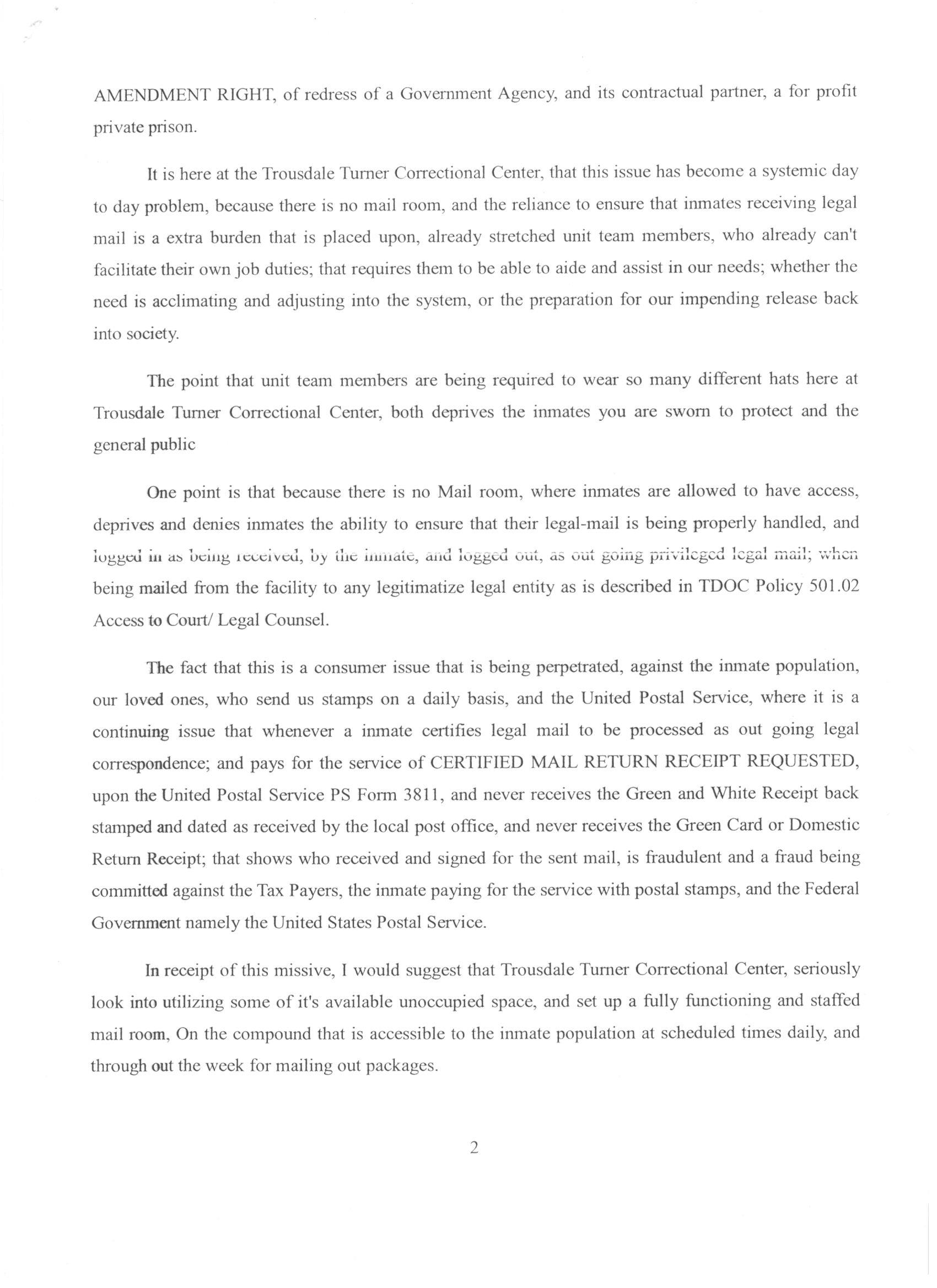 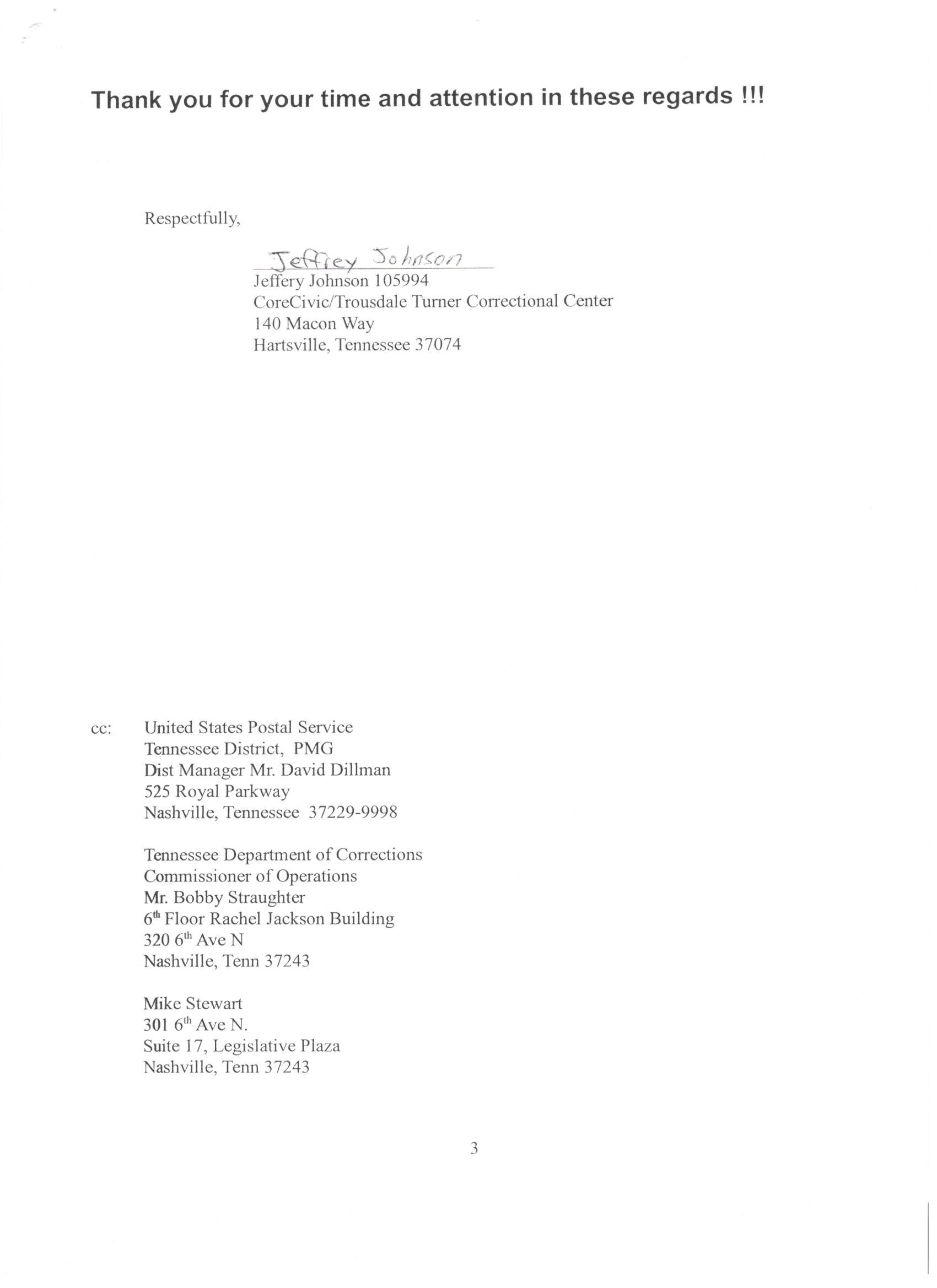 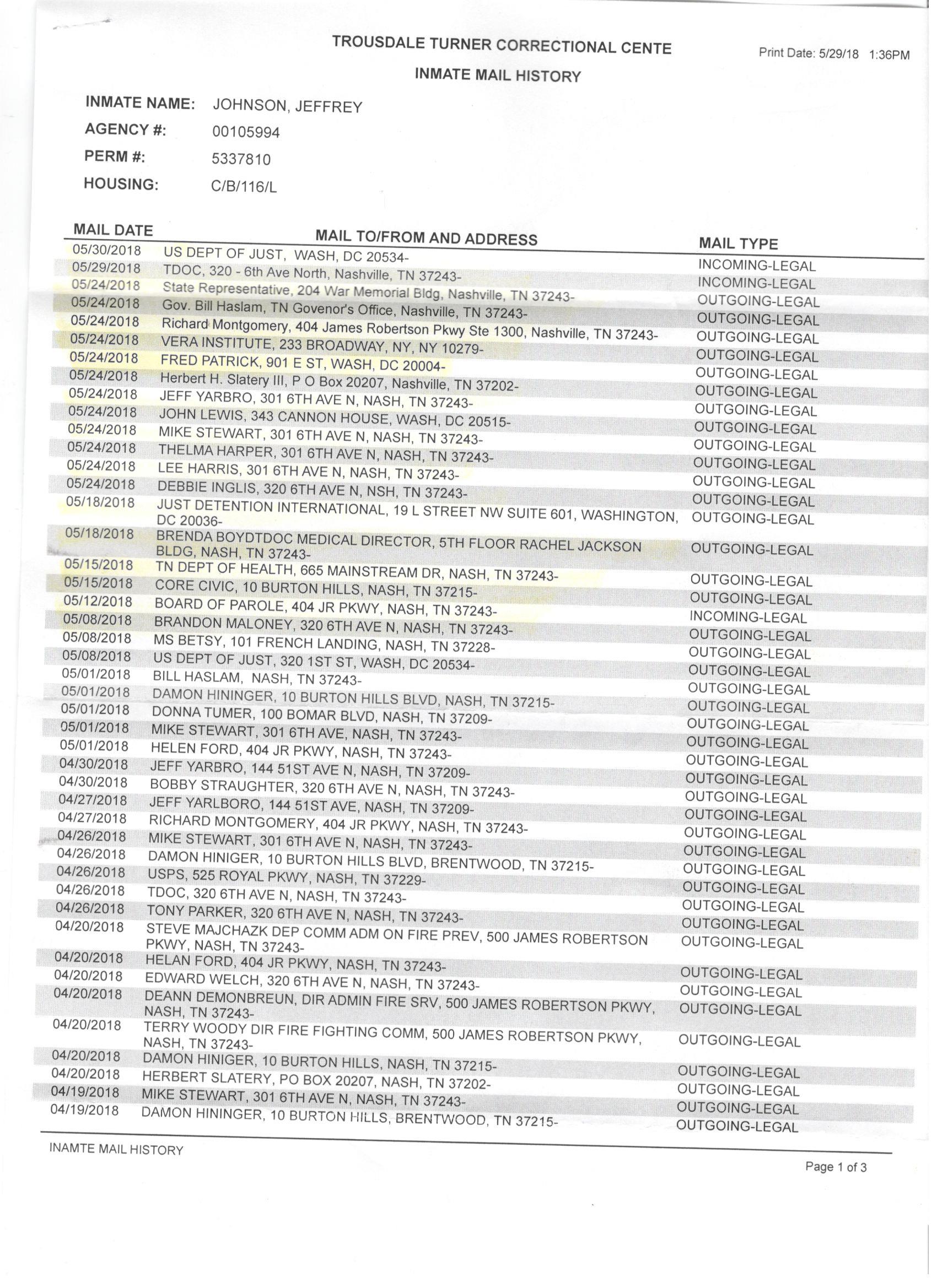 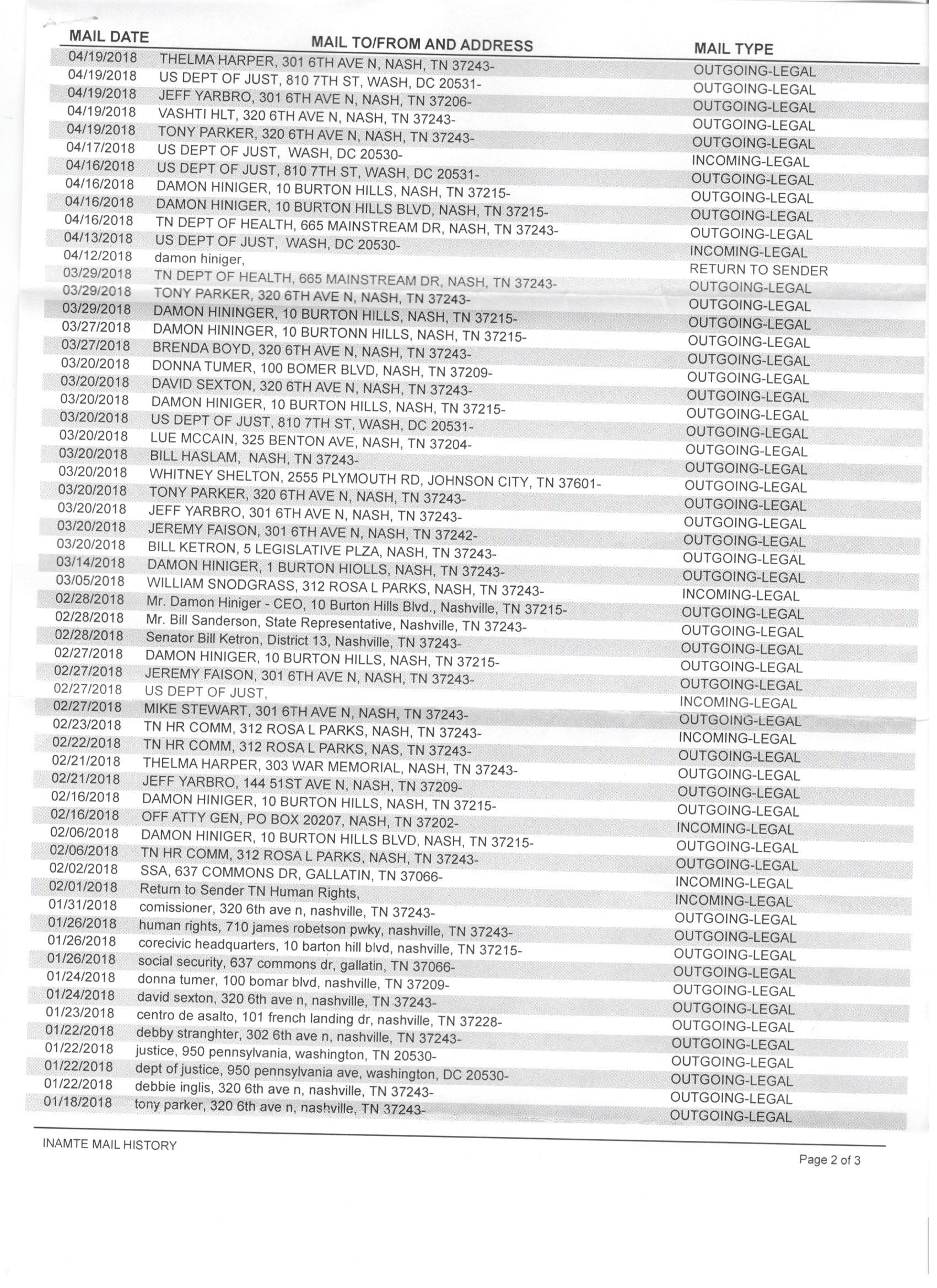 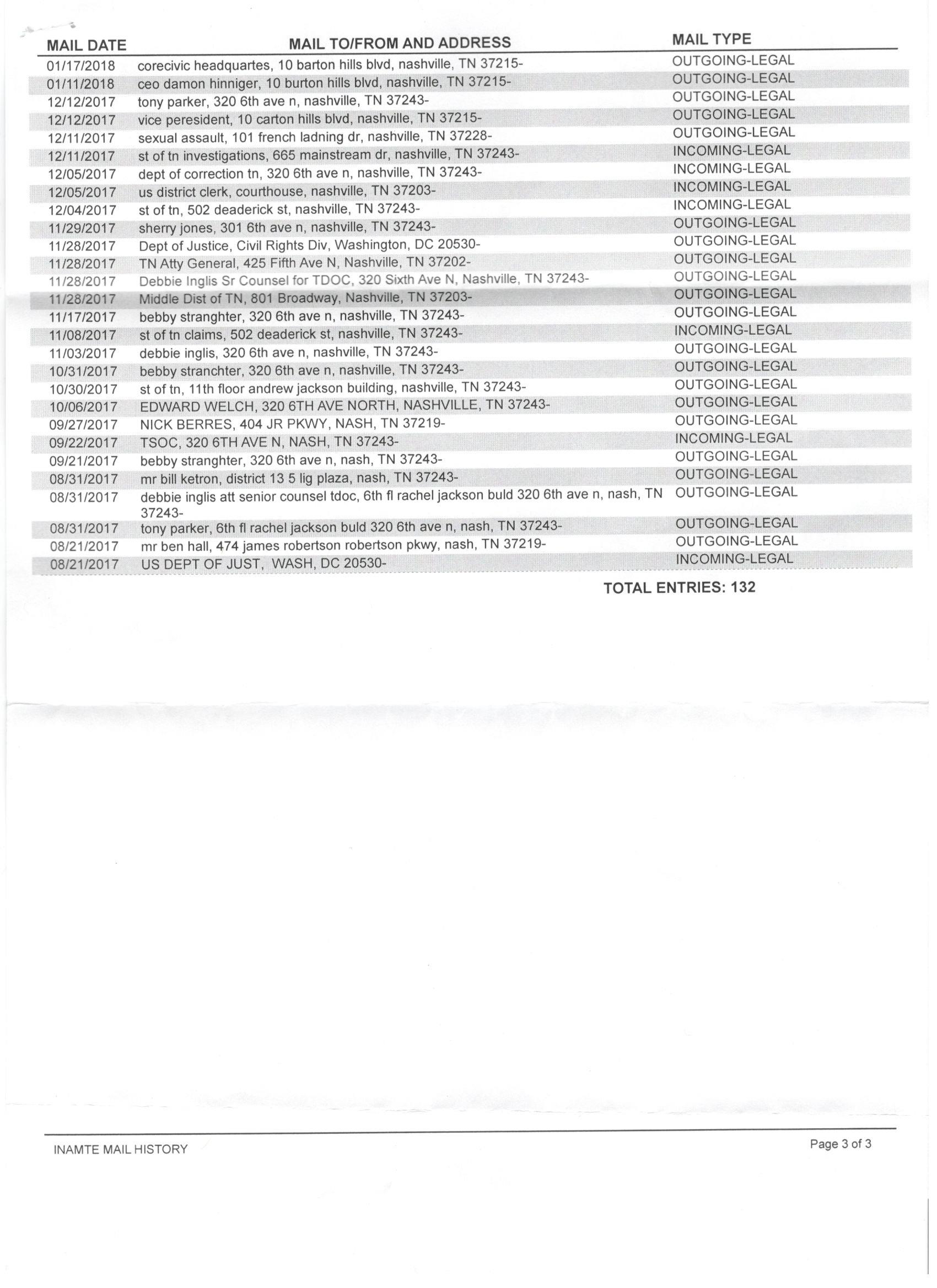