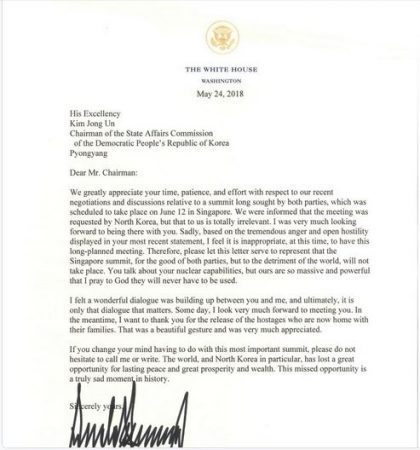 In the letter, Trump said that because of the North Korean regime’s latest expression of “tremendous anger and open hostility” toward the United States, “I feel it is inappropriate, at this time, to have this long-planned meeting.”

Trump was undoubtedly referring to a statement made earlier on Thursday by North Korean Foreign Ministry Vice Minister Choe Son Hui that “Whether the US will meet us at a meeting room or encounter us at nuclear-to-nuclear showdown is entirely dependent upon the decision and behavior of the United States.”

That statement came after Vice President Mike Pence said in an interview on Fox News Sunday that “This will only end like the Libyan model ended if Kim Jong Un doesn’t make a deal,” referencing comments of National Security Adviser John Bolton about former Libyan leader Muammar Gaddafi, who was murdered in 2011, eight years after abandoning his nuclear-weapons ambitions.

Although a communist country, North Korea’s official name is the “Democratic Peoples Republic of Korea” (DPRK).  Starvation, hardship and oppression of the nation’s people have been hallmarks of the regime Jong-Un inherited from his father, Kim Jong-Il.  South Korea is a capitalist country with democratically-elected leaders.

Jong-Un and North Korea generally have pursued nuclear weapons development for at least two decades, and no U.S. president has been successful in obtaining deterrence from the rogue nation despite financial streams and statements of intention.  Last summer North Korea’s provocative launching of missiles over Japan and threats to target Guam and other U.S. territories, and its mainland, began what appeared to be an escalating war of words and perhaps more between the U.S. and North Korea.

Although reportedly dismantling a nuclear test site Thursday morning in what was touted as a possible show of good faith, Reuters reported that the site might have been “obsolete.”

On Tuesday, Trump met at the White House with South Korean President Moon Jae-In and, when asked by a reporter, said that the public will know “next week” if, in fact, the summit would take place.

Some nine days ago, North Korea had threatened to cancel the talks “if it’s going to be a ‘one-sided’ affair where it’s pressured to give up its nuclear program,” according to CBS News.  At the same time, North Korea canceled discussions it was scheduled to have with South Korea, with whom it has technically been at war since the end of the Korean conflict in 1953.

Although reportedly destroying a nuclear test site to show good faith, NBC reported on Thursday that North Korea “made it clear it would not fully demolish its nuclear arsenal.”

A preliminary meeting in Singapore scheduled for “a few weeks ago” between the U.S. and North Korea resulted in the latter’s officials failing to attend, Newsweek reported on Wednesday.

However, on Monday Newsweek reported that the White House Communications Agency produced 250 copies of a commemorative coin depicting the scheduled event featuring Trump and Jong-Un in a face-to-face posture on one side, as reported by Peter Alexander of NBC News.

The Trump administration had previously indicated no knowledge of North Korea’s mid-month threat to withdraw from talks while maintaining the possibility that the June 12 summit would not come to fruition.

An earlier statement issued by the Korean Central News Agency had said, “If the Trump administration takes an approach to the DPRK-U.S. summit with sincerity for improved DPRK-U.S. relations, it will receive a deserved response from us.  However, if the U.S. is trying to drive us into a corner to force our unilateral nuclear abandonment, we will no longer be interested in such dialogue and cannot but reconsider our proceeding to the DPRK-U.S. summit,” according to Newsweek.

In his letter to Jong-Un, Trump expressed his gratitude for the May 10 release of three U.S. citizens held in the hermit nation between one and two years.

Appearing to place the onus of the meeting’s cancellation on Jong-Un, Trump closed the letter with, “If you change your mind having to do with this most important summit, please do not hesitate to call me or write. The world, and North Korea in particular, has lost a great opportunity for lasting peace and great prosperity and wealth. This missed opportunity is a truly sad moment in history.” 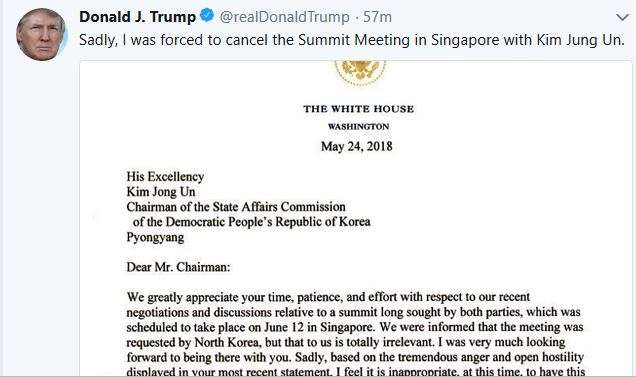