(May 13, 2018) — A May 12, 2018 New York Times article touted by several of its writers on Sunday morning titled “When Spies Hack Journalism” warns journalists to “tread carefully” before releasing leaked documents and information which may or may not be authentic.

The article cautions that in an age of “foreign” governments’ alleged intrusions into the computer servers of the U.S. government, the DNC servers in 2015 and 2016, and U.S.-based private companies such as SONY in 2014 by North Korea, information appearing to be genuine may require more in-depth investigation by journalists prior to publication.

The column’s author, Scott Shane, warns that “in a world in which foreign intelligence services hack, leak and fabricate, journalists will have to use extreme caution and extra transparency.”  At the same time, Shane wrote, “For reporters, withholding valuable information from the public is anathema.”

However, The Times and most other mainstream media outlets have “withheld valuable information” in the form of credible reports of the forgery of not one, but three allegedly government-issued documents bearing the name “Barack Hussein Obama II.”

While one of the “documents” was issued in hard copy by the Selective Service System to FOIA requesters, the other two are in the form of images on a computer screen identified as inauthentic by experts but which Americans have been expected to believe are genuine because the White House and mainstream media said so.

In the case of Obama’s “short-form” and “long-form” birth certificates, The Times and its legacy counterparts have guffawed at, derided, and ridiculed the deliverers of the news that both images show signs of forgery which deserve federal-level investigation.

The “short-form” Certification of Live Birth released on June 12, 2008 by an unconfirmed party was first said to be the only type of birth record available to anyone born in the state of Hawaii.  However, on April 27, 2011, after months of public pressure from then-businessman Donald J. Trump, the White House published what it said was a PDF scan of a certified copy of Obama’s “long-form” birth certificate from the Hawaii Department of Health.

Within hours, the image was declared a poorly-created forgery which only The Washington Times and a handful of other secondary outlets were willing to report.

Instead of using its vast resources to conduct its own investigation, The Times ridiculed Trump as a “birther” and purveyor of a “lie.”

Business Insider, too, reported in September 2016 that Trump’s “rise to political stardom was built on his spreading the false ‘birther’ theory that President Barack Obama was born in Kenya and not a US citizen. Beginning in 2011, Trump led the charge calling for Obama to release his long-form birth certificate, which he eventually did. Trump did not publicly reverse his comments until last September during the election, five years after he initially pushed the conspiracy theory.”

These “mainstream” outlets have continued such reportage despite a 5+-year criminal investigation conducted by a former detective concluding that the “long-form” birth certificate image is a “computer-generated forgery.”

Over the course of the investigation and its three press conferences, the “legacy” media refused to televise, report, discuss or investigate the findings which may indicate the planning and execution of the most significant political crime in U.S. history.

On December 16, 2016, the third and final presser of the probe included a video outlining each step in a process in which the forger copied items from an authentic Hawaii birth certificate and placed them at precisely the exact angle on the Obama “long-form” image.  During the presser, investigator Mike Zullo revealed that two well-known forensic analysts, each approaching its analysis of the image from a different discipline, concluded that the odds of the long-form image’s authenticity were astronomically low to completely impossible.

Nevertheless, those conclusions leading to the finding that a forgery of a birth certificate was uploaded to the White House website have not caused any in the mainstream media to question their own regurgitation of the claim that Obama was “born in Hawaii” nor who might have committed such a crime or why.

Moreover, The New York Times has published information easily identified as misleading, as in a July 2, 2016 article titled, “Inside the Six Weeks Donald Trump Was a Nonstop ‘Birther.'”  In that article, The Times wrote that “someone” was “dispatched to Hawaii to find the president’s original long-form birth certificate from 1961.”

That “someone” was identified before the fact as Obama’s personal attorney, Judith Corley, of Perkins Coie, which is now known to have been the conduit for remunerating Fusion GPS for the “dossier” now at the heart of multiple congressional investigations.   As several committees probe the reasoning behind FISA warrants and alleged political activity on the part of high-ranking FBI and Justice Department officials, a comprehensive report said to contain evidence of shocking U.S. government corruption is said to be weeks away from publication. 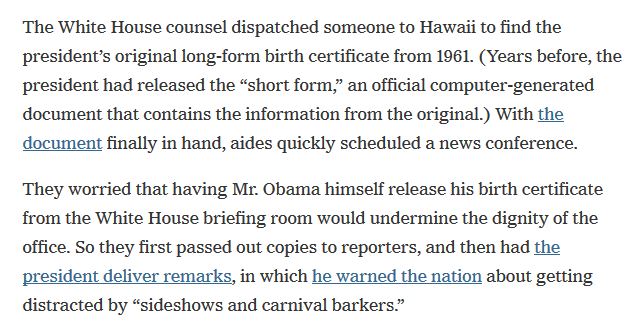 According to the White House blog posting containing the alleged correspondence between Corley and the Hawaii Department of Health to obtain Obama’s original birth document, Corley’s purpose was not to “find” the document, but rather, to fly to Honolulu, obtain two certified copies from then-Hawaii Department of Health Director Loretta Fuddy, then return to Washington, DC, where she would present them to the White House.

In its May 12 article, The Times mentions “intelligence services of nation states” now capable of penetrating computer systems and disseminating “troves of documents” to unsuspecting journalists eager to publish them.  It acknowledges that “An archive of genuine material may be seeded with slick forgeries,” but does not consider that  the reported forgeries of a sitting president’s government documentation, supported by two outside analysts, are worthy of “extra transparency.”

The New York Times Cautions Journalists to Watch for “Fabrication” of Documents added on Sunday, May 13, 2018