BOULDER, CO WANTS OIL COMPANIES TO RESTORE SNOWY WINTERS OF AN IDYLLIC PAST – AND PAY IT BILLIONS 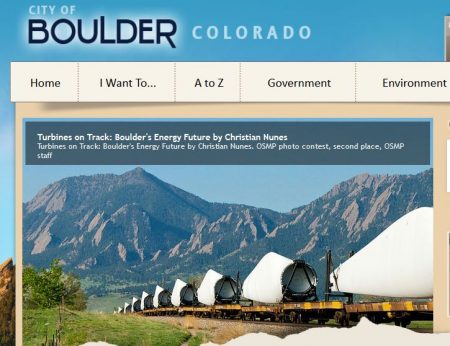 Back in the 1970s, I skied Colorado’s cross-country and downhill slopes pretty regularly. Some years were incredible: many feet of snow as glorious to behold as to ski on. Other years, like 1977, I’d come around a bend on my XC skis, see nothing but rock in front of me, and just ditch.

Who knew the industry I worked for in the later 70s was causing these climate and weather mood swings – even then, long before carbon dioxide levels hit the cataclysmic 400 ppm mark? Who knew profit-hungry oil companies were already preventing the Centennial State from having endless seasons of perfect ski conditions, followed by ample spring meltwater for cities, agriculture and trout streams?

I ask this because the People’s Republic of Boulder, CO has joined Oakland, San Francisco, New York and other liberal enclaves in suing for “climate relief.” Boulder doesn’t share the CA/NY worries about rising seas. Even Al Gore doesn’t claim the Pacific Ocean will reach the Mile High City anytime soon.

Boulderites want the courts to force ExxonMobil and Suncor to pay treble damages for causing too much snow and thus floods in some years, too little snow and thus droughts and poor ski conditions in other years; multiple heat waves in some years, bitter cold in others. They seek unspecified cash for climate adaptation, repair and reparation expenses – and restoration of idyllic conditions of selected past years.

Their 106-page, 478-paragraph complaint (with scores of sub-paragraphs) alleges that oil companies have committed public and private nuisance, trespass, continued sales of “huge amounts of fossil fuels,” and willful concealment of known harm from those sales – all to the great detriment of Boulder citizens.

These are the same fuels that saved whales from imminent extinction and gave Boulder and humanity prosperity, technology, health and longevity no one could even imagine when Colorado became a state in 1876. But now they’re suing the companies that have provided reliable, affordable fuels and raw materials that have brought them lights, heat, livelihoods, living standards, and countless products from paints, plastics, pharmaceuticals and fertilizers to skis, ski parkas, and vehicle fuel and asphalt roads to ski areas.

No wonder Para. 476 pointedly says “plaintiffs do not seek to enjoin any oil and gas operations or sales in Colorado.” To paraphrase Para. 453: plaintiffs received immense benefits from defendants’ products and actions, and it would be unconscionable and contrary to equity for plaintiffs to retain those benefits. Before collecting a dime, plaintiffs should reject future benefits and pay Exxon for past benefits received.

As to alleged fossil fuel damages in the form of wildfires and beetle kills, perhaps Boulder and its Sierra Club allies could employ better forest management – such as thinning trees, removing dead and diseased trees, and spraying to control pine bark beetles. It would be equally salubrious if they would stop abusing gullible children – by having little Sequoia berate Exxon for causing floods, fires and less snow.

As to the allegation that Exxon and Suncor have deprived Boulder of its once-snowy climate, the area’s annual snowfall records demonstrate how ludicrous the claim is.

So where does Boulder get the evidence to back up its allegations? As Alfonso Bedoya might have told Humphrey Bogart in a climate change version of The Treasure of the Sierra Madre, “We don’t have to show you any stinking evidence!” Instead of evidence, the city has assertions, a phony 97% consensus that fossil fuels are causing dangerous manmade climate change, a report saying Boulder will have more heat waves and less snow by 2050, and computer models that supposedly back up the report.

In the real world, the 20-year temperature “pause” is back, the sun’s “quiet phase” may be reaching a “grand solar minimum,” and actual temperature, hurricane and other data contradict climate model predictions and scenarios. In fact, the models are little more than high-tech circular reasoning.

Since they are based on the assertion that rising atmospheric carbon dioxide levels drive global warming, Garbage In-Garbage Out models will always generate the calamities that alarmist researchers and Boulder lawyers are blaming on Big Oil. Where reality contradicts models, reality must be wrong – and actual temperature measurements must be adjusted to reflect model outputs and dominant climate theory.

When did the sun and other natural forces cease being a factor? What caused the ice ages, interglacial periods, Medieval Warm Period, Little Ice Age and Anasazi drought? Questions like these are off limits.

Indeed, the Intergovernmental Panel on Climate Change and dominant, government-funded climate research have gone from seeking to identify human influences on Earth’s climate … to decreeing that only human influences matter, natural forces no longer play a meaningful role, and humans can control climate and weather by eliminating fossil fuels and regulating atmospheric greenhouse gas levels.

Arrayed against the contingency fee seeking Boulder legal team is an oil industry whose spokesmen offer timid tripe: “Lawsuits like this do not solve the global problem of climate change.” It should be up to “appropriate regulatory agencies,” instead of judges, to decide how much CO2 a company may emit. Oil companies “should not be subject to liability for engaging in acts of commerce while adhering to our already stringent state and federal laws.” Can’t we have a more robust defense on the merits?

Boulder and its allied cities and counties have little reason to worry that their absurd assertions will be challenged on the merits in court. But they don’t even care about winning their case. They just hope Exxon and Suncor will pay them a few hundred million bucks – and pave the way for more lawsuits.

In fact, a 2016 “Lawyers for Better Business” report said climate lawsuits will soon “dwarf all other litigation in terms of the number of plaintiffs and the timeframe in which it can happen.” It’s likely to become a global industry, “with much bigger damages than seen with tobacco and asbestos.”

How else will profligate progressive politicians pay for all the welfare programs that keep them in power?

Such is the sorry state of US and international politics, education, science and jurisprudence.

What alternatives do these litigants and activists offer for the fossil fuel, nuclear and hydroelectric energy they want to ban? They seem to think the billions of tons of lithium, cobalt, iron, copper, manganese, rare earth metals, concrete and other raw materials needed for millions of wind turbines and solar panels are somehow “renewable” – and blanketing the planet with wind and solar installations is eco-friendly.

They seem convinced that it’s better for Planet Earth to ban drilling, and instead convert another billion acres of crop and habitat land into gigantic biofuel plantations. In fact, this year’s Earth Day organizers want future plastics to come from non-hydrocarbon sources – which would mean plowing under hundreds of millions more acres to grow crops for petrochemical feed stocks.

This is sheer lunacy. It’s the product of the fear, loathing, despair, intolerance and groupthink that pervade Big Green environmentalism today.

Will the Scott Pruitt EPA finally reverse the ridiculous Endangerment Finding that is yet another foundation for this climate nonsense? Will Neil Gorsuch be the deciding vote that brings a modicum of sanity back to our Supreme Court and legal system? Only time will tell.