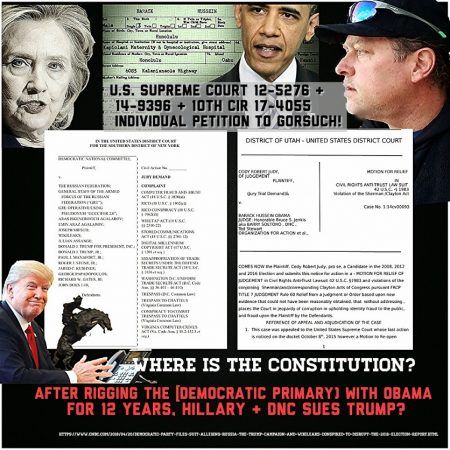 (Apr. 20, 2018) — Hillary Clinton and the DNC on Friday, April 20, 2018 sued President Trump’s campaign alleging a conspiracy between his campaign and the Russian Government with the circumstantial evidence of her losing based upon hacking from the Romanian source of Guccifer and Wikileaks with no mention of the ‘Details’ of the released documentation being the culprit of the loss.

In other words, they are [not] mad about the solicitous, harmful, and foul dialogue they subsumed themselves in (leading to Debbie Wasserman Schultz‘s resigning from DNC Chairman) but are mad it was stolen and distributed through the hacking of foreign actors. They are not mad about the Democratic Party Primaries being “rigged,” as was stated by Elizabeth Warren, Donna Brazile-DNC Chairman, Bernie Sanders and of course, Cody Robert Judy, both presidential candidates in the Democratic Party in 2016.

They aren’t mad about the favorable and fewer debates Hillary garnered on weekends, nor turning the debate stage into their own hand-picked candidates surely she could handle. The Cabalish Cartel, likened to the dark embalming tombs fertile for the fawning scarab beetles to lie in, had “promised” Hillary the Democratic Party Nomination for President with the great gifts bestowed upon her from the one and only usurping leader, Barack Hussein Obama.

Favors like the Secretary of State office with an open leash to usurp the office from The People with her own private email system leveraged in the shadows of the blackmail she had, but did not use, in the constitutionally ineligible, usurping, and disbarred Barack Hussein Obama, aka Barry Soetoro, who allegedly failed to state his alias to the Bar: Attorney Registration and Disciplinary Commission of the Supreme Court of Illinois.