AS A “JOKE,” DESPITE FINDINGS OF FORGERY

Included in his tweet was a video of Barack Hussein Obama “roasting” Trump in 2011 shortly after the release of an image deemed to be a scan of a certified copy of Obama’s “long-form” birth certificate from the State of Hawaii.

On the evening of April 29, 2011, Obama had been speaking at the White House Correspondents Association annual dinner at which Trump was present. While the audience laughed at Obama’s mockery of Trump’s repeated demands to see Obama’s detailed birth certificate to presumably prove that he was eligible to hold the office of president, Trump remained serious and unsmiling.

The “roast” included the airing of a short clip from “The Lion King” Obama termed “my official birth video,” which was an apparent parody on the questions raised by many about Obama’s birthplace which gained a voice with Trump.

Pfeiffer was likely replying to Trump’s tweet on Monday evening stating that U.S. “immigration laws” “are an Obama joke.”

It is unclear in what capacity Obama factored into Trump’s comment given that while Obama was in the White House, no immigration laws were passed or amended.

However, in 2012, the Obama regime implemented by “executive action” the “Deferred Action for Childhood Arrivals” (DACA) initiative which the Trump administration attempted to shutter effective March 5, 2018 amid a number of legal challenges.

The program allowed potentially hundreds of thousands of illegal aliens in their 20s and 30s brought to the United States as children to apply for what amounted to a de facto legal status if they met certain criteria, did not violate the law, and were attending school or working. If accepted, each recipient was permitted the ability to renew his or her DACA status every two years and avoid deportation.

Obama had originally said that as chief executive, he did not have the authority to “change” immigration law, as the U.S. Constitution grants legislative ability only to the Congress.

For months, Trump has urged Congress to act on the DACA issue to resolve the status of those accepted into the program while it was still active.

On Easter Sunday, Trump tweeted, taking many by surprise, that his proposal to accept “DACA” participants into the country’s social fabric was withdrawn.  He blamed “Democrats” for instituting the policy known as “Catch & Release” which places illegal aliens into a process to generally include release into the U.S. general population.

After U.S. Attorney General Jeff Sessions announced last September that DACA would and in early March, Trump encouraged Congress to pass a law resolving the dilemma of those enrolled in the program, which itself had been found “unconstitutional” by Sessions and his legal advisors.

In exchange, the Trump administration said, it wanted funding for a “border wall” promised during the 2016 presidential campaign, improved border security, and changes to a number of long-standing U.S. immigration policies.

Trump’s tweets on Sunday may have been spurred by his viewing of a broadcast by “Fox & Friends,” a news and commentary program he has said he enjoys, which contained video footage of a “caravan” of an estimated 1,000-1,200 individuals from Central America who are reportedly making their way through Mexico to the border with the United States unimpeded.

The group was reportedly organized by “Pueblos sin Fronteras” and allowed to proceed through Mexico in violation of that nation’s immigration laws. On March 30, Buzzfeed News, which has a journalist embedded with the group, reported:

When they get to the US, they hope American authorities will grant them asylum or, for some, be absent when they attempt to cross the border illegally. More likely is that it will set up an enormous challenge to the Trump administration’s immigration policies and its ability to deal with an organized group of migrants numbering in the hundreds.

Pfeiffer was the official who vouched for the “long-form” birth certificate image the day it was released to the public, April 27, 2011. His photo and title appear at the bottom of the now-archived blog post chronicling the process by which to certified copies of the “long-form” birth certificate were allegedly obtained from the Hawaii Department of Health several days before by Obama’s then-personal attorney, Judith Corley of Perkins Coie.

Doubts about Obama’s eligibility arose as early as 2007 but were squelched by a partisan, sycophantic media which nevertheless itself speculated that Obama was born in a foreign country. Despite calls, letters, emails and faxes which likely numbered in the thousands or tens of thousands, no member of Congress would tackle the question and demand proof of Obama’s eligibility as a “natural born Citizen” either before or after the 2008 election.

Following the publication of the image, several graphics experts came forward to say that it was a poorly-drafted forgery. Concerns about the upcoming 2012 presidential election burgeoned among many Americans, including members of a Tea Party group in Surprise, AZ, which decided to approach their Sheriff, Joseph Arpaio, to request an investigation.

Within days, Zullo was forced to inform Arpaio that the image was plagued with irregularities and could not be “cleared” as genuine.  That finding launched what became a 5+-year investigation culminating not only in Zullo’s conclusion that the image is a “computer-generated forgery,” but also with the concurrence of two reputable forensic analysts. 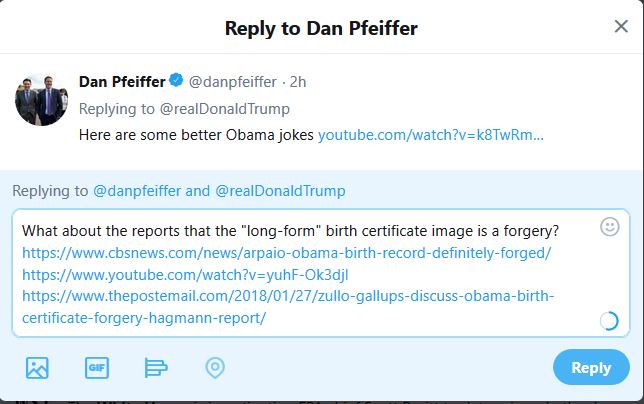