HOWEVER, PLAINTIFF BELIEVES DAY WILL COME “SOONER OR LATER” 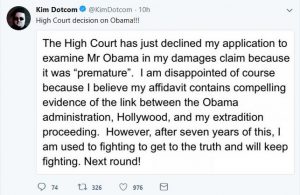 Dotcom’s petition to the court was based on his contention that Obama had knowledge of and gave his assent for Dotcom’s prosecution by the U.S. Justice Department in 2012 for alleged copyright infringement and other alleged crimes.

In 2009, the former hacker and multi-faceted businessman had launched, along with four other individuals, a file-sharing website, “Megaupload,” which the FBI shut down in January 2012 in conjunction with a raid by local police on Dotcom’s home.

On house arrest since that time, much of Dotcom’s wealth and assets have been seized by the U.S. government, where they still reside. However, Dotcom sued local police, receiving, along with two of his co-founders, a settlement from the raid in an undisclosed amount.

In January Dotcom sued the New Zealand government for $6.8 billion, alleging “the destruction of his business, loss of reputation, lost business opportunities, legal costs and lost opportunities on the home he was renting.”

In an extensive court filing made public on Tuesday, Dotcom claimed that the FBI and DOJ targeted him to appease Hollywood actors and actresses who allegedly said they would withhold millions of dollars in donations from Obama’s 2012 presidential campaign if his administration did not clamp down on copyright violators.

Dotcom has made various public statements claiming that Megaupload did not encourage users to place copyrighted material on its servers and that if it were to be found there, the copyright owner could easily and immediately remove it without the need for technical expertise.

In his tweets on Wednesday, Dotcom conceded that the High Court’s decision was not unexpected but that he would continue his quest for justice, the restoration of his assets, and fight against extradition to the U.S. to face the charges.

Dotcom continues to claim publicly that he was “involved” when in 2016, then-DNC Data Director Seth Rich allegedly transferred emails from DNC servers through a “memory stick” to the open-government organization WikiLeaks, which began releasing them on July 22, 2016.

The emails proved highly damaging to Democrat presidential contender Hillary Clinton, as highly-placed DNC officials demonstrated in their communications a clear preference for Clinton over primary challenger Bernie Sanders. Later, Clinton would name WikiLeaks as one of the factors which lost her the election to Donald Trump.

In the early-morning hours of July 10, 2016, Rich was shot twice in the abdomen, according to investigator Matt Couch, and taken to a Washington, DC hospital, where he reportedly died during surgery.

Although Wikileaks maintains a policy of protecting its sources, founder Julian Assange has all but said that Rich was a source.  In August 2016, Assange offered a $20,000 reward to anyone with information leading to the apprehension of Rich’s killer.

Nearly two years later, with collective rewards totaling more than $300,000, no one has apparently stepped forward, and the DNC does not appear curious as to the apparent lack of progress by the Washington, DC Metro Police Department in finding the perpetrator(s).

Through his attorneys, Dotcom offered to provide the evidence he says he has about the transfer of the emails to WikiLeaks to Special Counsel Robert S. Mueller, III but has reportedly received no response.

The narrative proffered by the U.S. government is that the DNC servers were “hacked” by Russian-government operatives.  However, the servers were admittedly never examined by the FBI, but rather, by a Democrat-aligned private company, Crowdstrike.

At the same time that he released news of the court’s decision, Dotcom opined that his legal team will “get the opportunity to question Obama sooner or later.”