PLEDGES TO RE-ESTABLISH “LAW AND ORDER” 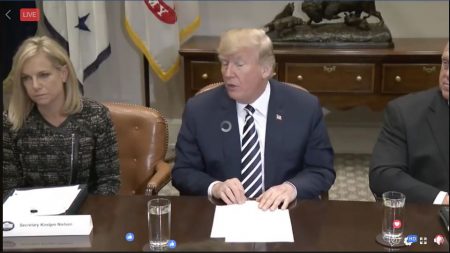 (Mar. 20, 2018) — On Tuesday afternoon, The Daily Signal broadcasted live on Facebook a meeting among law-enforcers, Attorney General Jeff Sessions, members of Congress, and President Trump to discuss the self-declared “sanctuary” jurisdictions in states and cities aimed at protecting illegal aliens from arrest and/or deportation.

The roundtable began at approximately 2:00 p.m. EDT and ended just before 3:00.

Also in attendance was DHS Secretary Kirstjen Nielsen, who said that the “rule of law” is at stake in light of “lives being taken each day” because of illegal-alien activity throughout the country.

Mary Ann Mendoza, whose adult son, Sgt. Brandon Mendoza, was killed by a vehicular accident caused by an intoxicated illegal alien, was present and recognized by Trump and others.

At 2:55, Trump pledged that “We’re gonna get there” and that “law and order and safety” would prevail, which had been one of his campaign promises.