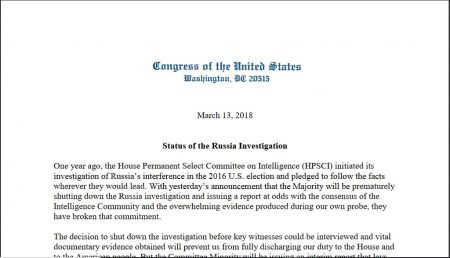 (Mar. 13, 2018) — The Democrat minority on the House Permanent Subcommittee on Intelligence (HPSCI) on Tuesday evening released its rebuttal to the decision issued by the committee’s majority on Monday to conclude its investigation into alleged “collusion” between the Trump campaign and Russia and that country’s reported interference in the 2016 election.

In the opening statement, committee Democrats accused the Majority of “broken” their “commitment” to “follow the facts wherever they lead.”

The rebuttal comes in the form of a 21-page report citing alleged deficiencies in the majority’s probe and states that Democrats on the committee will continue the investigations.

On page 4, the minority states that it is unquestioned that “Russian actors” obtained emails from the Clinton campaign and DNC servers and provided them to WikiLeaks.  However, on numerous occasions, WikiLeaks founder Julian Assange has insisted that he did not receive the emails from any “state party,” including Russia.

On page 6, the group asserted that “there have long been credible allegations as to the use of Trump properties to launder money by Russian oligarchs, criminals, and regime cronies.”

A list of individuals the minority said it wishes to interview is based, in part, on the Democrats’ speculation that they “likely” could provide insight or information into the inner workings of the Trump campaign across a variety of platforms and areas.

The Democrats also wish to interview individuals who have already appeared before the committee to include former Trump campaign manager Corey Lewandowski, Trump adviser and son-in-law Jared Kushner, and Donald Trump Jr.