CITING “DECISIONS MADE AND NOT MADE” 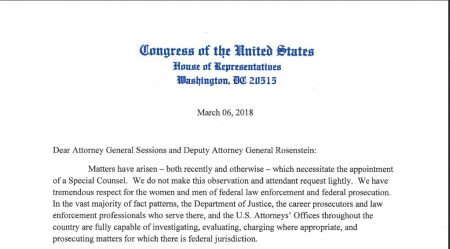 (Mar. 6, 2018) — Two U.S. House committee chairmen have sent a letter to Attorney General Jeff Sessions and Deputy Attorney General Rod Rosenstein requesting that a Special Counsel be appointed to investigate allegations of corruption within the U.S. Justice Department and one of its subsidiaries, the Federal Bureau of Investigation (FBI).

The complete letter can be read here:  https://oversight.house.gov/wp-content/uploads/2018/03/Goodlatte-Gowdy-special-counsel-letter.pdf

Judiciary Committee Chairman Robert Goodlatte and Oversight & Government Reform Committee Chairman Trey Gowdy, both Republicans who are not seeking re-election in November, wrote that because of conflicts of interest within the agencies in regard to the investigation they believe should take place, “an independent Special Counsel is warranted.”

A number of Republican congressmen have previously called for a second Special Counsel, particularly in light of a four-page memo released by Republican members of the House Permanent Subcommittee on Intelligence (HPSCI) chaired by Rep. Devin Nunes.

The March 6, 2018 letter to Sessions and Rosenstein refers to revelations contained in the “Nunes memo,” which contended that four surveillance warrants were requested of the Foreign Intelligence Surveillance Court (FISC) by means of an unverified “dossier” appearing to implicate Donald Trump in salacious activity while in Russia and possible “collusion” with the Kremlin during the 2016 presidential campaign and perhaps afterward.

A Democrat-authored “counter-memo” released on February 24 refutes the claim that the dossier was heavily relied upon when presented to the FISC as evidence to support requests for ongoing surveillance of Carter Page, a short-time foreign-policy adviser to the Trump campaign in 2016.

Surveillance of Page began in October 2016, with subsequent requests from the DOJ and FBI approved by the FISC judges and extended through June of last year.

Both the Senate and House Judiciary Committees have conducted investigations into whether or not anyone in the Trump campaign improperly coordinated with Russian operatives to sway the election and have thus far found no evidence to support the theory.

Special Counsel Robert Mueller, who was brought in last May by Rosenstein to lead a dual-pronged investigation of reported Russian interference in the 2016 election and Trump “collusion” claims, has obtained grand-jury indictments against former Trump campaign manager Paul Manafort and an associate, Rick Gates, unrelated to the Trump campaign.

On February 16, Rosenstein held a press conference in which he announced that 13 Russian nationals and three Russian-organized groups were indicted by a grand jury for their alleged role in interfering with the election.  It is unclear as to whether or not the Russians will be extradited to the U.S. for prosecution.

Trump’s first national security adviser, Lt. Gen. Michael T. Flynn (Ret), pleaded guilty to lying to the FBI in December, although in February Mueller requested that his sentencing be delayed.  A new presiding judge in the case, G. Emmett Sullivan, has also requested all exculpatory material despite Flynn’s having already accepted a plea deal.

Some believe that more indictments of former or current Trump aides are forthcoming, while Trump has roundly criticized the probe of his campaign as a “witch hunt.”

The DOJ’s inspector general, Michael Horowitz, has been investigating allegations of political influence, bias and misconduct within the FBI since January of last year and is expected to issue his final report this month, according to independent reporter Sara Carter.  Carter is a regular contributor to the “Hannity” show, where potential wrongdoing within the FBI by former Acting Director Andrew McCabe, former Deputy of Counterintelligence Peter Strzok, and FBI staff attorney Lisa Page have been discussed in depth.

On Tuesday Carter published a list of pros and cons, according to DOJ employees and members of Congress, of appointing a second special counsel for the reasons outlined in the Gowdy/Goodlatte letter.

Carter has also been in contact with an informant who has reportedly been interviewed behind closed doors by three congressional committees about the “Uranium One” agreement in which the Obama regime sold 20% of U.S. uranium supplies to a company owned by Russia.

Goodlatte and Gowdy maintain that “decisions made and not made” by both former and current Department of Justice and FBI officials have led to the need for a special counsel.  “There is evidence of bias, trending toward animus, among those charged with investigating serious cases.  There is evidence political opposition research was used in court filings,” they wrote in the letter in a clear reference to the “dossier” compiled by former British intelligence agent Christopher Steele.

Last month, a January 4, 2018 memo from the Senate Judiciary Committee chaired by Charles Grassley was made public, with some redactions, and recommended that a criminal investigation take place into Steele’s contradictory statements made in a civil proceeding filed against him in a British court and to the FBI as to whether or not he leaked information from the dossier to the media.

While the two chairmen indicated confidence in Horowitz’s work on Tuesday, they wrote that he “does not have the authority to investigate other governmental entities or former employees of the Department, the Bureau, or other agencies.”

They concluded by terming their request to Sessions and Rosenstein as “important.”