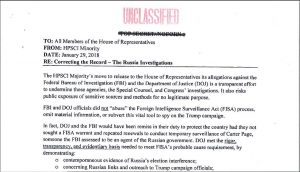 (Feb. 24, 2018) — At approximately 4:15 p.m. EST on Saturday, the Democratic response to a Republican-authored memo issued by the House Permanent Subcommittee on Intelligence Committee (HPSCI) made public on February 2 was released.

The ten-page memo released on Saturday authored by the Democrats on the same committee is dated January 29, 2018 and titled, “Correcting the Record — the Russia Investigations.”   It contends that the Republicans’ memo was “a transparent effort” to “undermine” the FBI, U.S. Justice Department, Special Counsel Robert S. Mueller, III and congressional investigations into Russian “interference” in the 2016 election and the possible improper communications between Trump campaign aides with Russian operatives.

NPR reported that the memo was made public as HPSCI Chairman Devin Nunes was speaking at the annual CPAC gathering (Conservative Political Action Conference) in National Harbor, MD.  During his address, Nunes focused on the “abuse” the Republican memo alleged was utilized by the DOJ and FBI when applying to the Foreign Intelligence Surveillance Court (FISC) for warrants to collect the communications of at least one Trump campaign adviser, Carter Page, in October 2016 through June 2017.

The Democrat memo reports Page to be “an agent of the Russian government,” according to the FBI.

The Democrat memo claims that the Trump “dossier,” compiled by former MI6 agent Christopher Steele and funded by the DNC and Hillary Clinton campaign, did not provide the impetus to launch an FBI counterintelligence investigation in July 2016 into whether or not any Trump campaign aides were “colluding” with the Russians.  Rather, the new memo states, “the FBI’s closely-held investigative team only received Steele’s reporting in mid-September — more than seven weeks later.  The FBI — and, subsequently, the Special Counsel’s — investigation into links between the Russian government and Trump campaign associates has been based on troubling law enforcement and and intelligence information unrelated to the ‘dossier.'”

There are numerous redactions in the memo as a result of the White House’s rejection of its publication in its original form earlier this month.  At the time, Trump advised the subcommittee’s Democrats to consult with the FBI and DOJ and to make appropriate redactions of any non-disclosable sources and/or methods.

The memo states that the Republican memo was purposely misleading and that Page had exhibited “suspicious activity” worthy of government surveillance. It also states that former Trump campaign aide George Papadopoulos “interacted with Russian agents.”

Neither the Democrat nor Republican-authoried HPSCI memos provided supporting documentation of its claims.

Following the Democrat memo’s release, Nunes posted the following on the HPSCI website:

“The American people now clearly understand that the FBI used political dirt paid for by the Democratic Party to spy on an American citizen from the Republican Party. Furthermore, the FISA court was misled about Mr. Page’s past interactions with the FBI in which he helped build a case against Russian operatives in America who were brought to justice. It defies belief that the Department of Justice and FBI failed to provide information to a secret court that they had provided to an open federal court regarding their past interactions with Mr. Page.”

The Republican majority also released a “Key Points” summary of the Democrats’ memo and a point-by-point refutation of its claims.

An alternate link to the Democrat memo on the HPSCI website is here.

Page has not been charged with a crime.  In September 2016, he filed lawsuits against The Huffington Post and Yahoo! News alleging defamation as a result of articles claiming that he was under investigation for having met with Russians who allegedly played a part in interfering in the 2016 U.S. election.

After the Republican memo became public, Page said he would “update” the lawsuits.