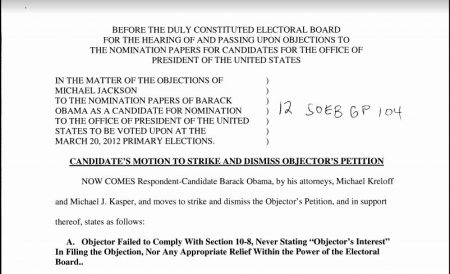 (Feb. 17, 2018) — On January 25, 2017, The Post & Email published an article recounting a 2012 Illinois ballot challenge to Barack Hussein Obama’s presidential candidacy after the objector, Michael D. Jackson, pointed out to us that the “long-form” birth certificate image posted at the White House website on April 27, 2011 had, in fact, been submitted as documentary evidence that Obama is a “natural born Citizen” to the Illinois State Board of Elections (ILSBOE).

Beginning in 2007, as a result of his announcement that he would seek the presidency, many Americans questioned whether or not Obama met the Article II, Section 1, clause 5 requirement reserved by the Founders for the nation’s chief executive given the abundance of varying life narratives as to his country of birth.

While some in the major media had reported over a number of years that Obama was born in Kenya or Indonesia, at some point, the narrative of “born in Hawaii” emerged, a claim the “long-form” birth certificate image appeared to substantiate. However, almost immediately after its release, several experts in the field declared it a poorly-crafted forgery.

Four months later, a group of citizens approached their local law enforcer, Maricopa County Sheriff Joseph Arpaio, with a request that he launch an investigation based on the several reports that the birth certificate image is fraudulent and could render their votes disenfranchised in the November 2012 election.

Arpaio agreed to begin a probe, which he delegated to his “Cold Case Posse” led by former New Jersey detective Mike Zullo. Expecting to swiftly “clear” the document as non-problematic, Zullo and his team were forced several days later to inform Arpaio that the image was fraught with anomalies.

At that point, Zullo virtually alone continued the investigation, which took him to Hawaii on two occasions and back and forth across the country on three while gathering evidence and attempting to speak with lawmakers in the nation’s capital about his findings. However, no congressional probe was ever launched, nor did the FBI or Justice Department ever express any curiosity in why the White House would have uploaded a forgery and presented it as authentic to the American people.

Over the 5+ years of the investigation, Zullo spoke at length at three press conferences, the last of which occurred on December 15, 2016. During that presser, Zullo revealed that he had commissioned two forensic analysts, one from Hawaii and one from Italy, who both reached similar conclusions as to the lack of authenticity of the long-form birth certificate image bearing Obama’s name.

In what has proven to be an obvious pattern, the mainstream media failed to draw attention to the significance of the analysts’ conclusions and instead celebrated the fact that as Arpaio would be leaving office at the end of that month, the birth certificate image would be “concluded.”

Given that Obama’s purported “short-form” birth certificate, released on June 12, 2008 to much fanfare, is also suspect and Zullo’s investigation found that his Selective Service registration form is a “hard-copy forgery,” Arpaio had expressed at the end of the second press conference on July 17, 2012 that the lack of any verifiable documentation about the 44th sitting president was a “national security” concern. His plea to Congress to launch its own probe went unheeded.

After a quiet period, since early December Zullo has been appearing on numerous radio shows to speak about the results of the investigation, current events, and how the two might be interconnected.

In a December 22, 2017 interview with Carl Gallups of “Freedom Friday,” Zullo reminded listeners that the birth certificate image, despite having been presented on the White House website, has never been presented in a court of law as evidence of Obama’s alleged birth in Hawaii.

On December 24, Jackson contacted The Post & Email to say that the image was submitted to the ILSBOE on Obama’s behalf in response to his ballot objection nearly six years prior.  Included with his email were documents associated with his case, including Obama’s attorneys’ argument to his objection titled “Motion to Strike and Dismiss the Objector’s Petition.”

The then said, “Contrary to Objector’s claims, President Obama’s birth in the United States establishes his eligibility for office as a ‘natural born citizen.'”

On January 21, 2017, The Post & Email submitted a request under the Illinois Freedom of Information Act (FOIA) to Heather Kimmons, then-ILSBOE FOIA officer, for all documents related to Jackson’s January 2012 ballot challenge, case #12 SOEB GP 104. As revealed in our January 25 article, the request received a prompt response.  However, it was missing the Motion to Strike.

After we recontacted Kimmons to request it a second time, she responded, “It would have been part of the record, but it was not found in the initial search. We will continue to look for it and will forward to you if it is located.”

The Motion to Strike was not included, although the long-form birth certificate image which had been part of it was page 8 of 21.  The package contained Jackson’s objection, a declaration of its outcome and a reference to a “Candidate’s Motion” with an “Exhibit A,” but not the actual document.

On January 26, Jackson filed his own FOIA request to Kimmons, who informed him on January 30 that Matt Dietrich was now the ILSBOE FOIA officer and that she had forwarded the request to him.

From Dietrich, Jackson received two attachments which did not include the Motion to Strike.

“I specifically would like to request through our FOIA regarding case #12 SOEB GP 104 the record, the document submitted on behalf of the candidate unto the ISBOE titled: “CANDIDATE’S MOTION TO STRIKE AND DISMISS OBJECTOR’S PETITION,” Jackson wrote to Dietrich on February 2.

I can acknowledge that it existed because it is referred to in the hearing officer’s decision. It’s possible that it was misfiled. I will check one other possible location.

On February 9, Dietrich sent Jackson another message in regard to the Motion to Strike:

We have searched our hard copy files for cases 12 SOEB GP 103 and GP 104 and we have no documents “Candidates Motion to Strike and Dismiss Objector’s Petition.” We can acknowledge that it was filed but no copy was retained in our files.

On February 11, Jackson replied to Dietrich:

With regards to my ISBOE FOIA request to obtain certain known records:”Candidate’s Motion to Strike and Dismiss Objector’s Petition”:

I would like to know how can the ISBOE “acknowledge that it was filed, but no copy was retained in our files“?

With due respect to common sense, that doesn’t even make any sense.

A person cannot say something was filed, but not retained on record.

Those records belong to the People, because the Government is the People’s.

I exhort, that somebody recheck the files, because those records exist!

You have asked for the same record twice, and I as well.

More pressure shall be applied and they will have to cough up the record.

On February 15, following up on Jackson’s request, Dietrich wrote:

Attached are the motions to dismiss in the cases you requested.

Later that day, Jackson emailed us to say:

I received an answer from Matt and the FOIA!

So at the end of the day they did cough up the truth.

Jackson attached the “Motion to Strike and Dismiss Objector’s Petition” on which the case number was handwritten along with Dietrich’s final email.

The long-form birth certificate image appears on page 3 of the document.

One Response to "Persistence is Key When Making FOIA Requests"