FOR REFUSAL TO RELEASE DOCUMENTS UNDER FOIA 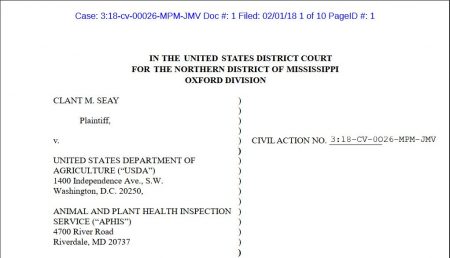 (Feb. 5, 2018) — A federal lawsuit has been filed against the U.S. Department of Agriculture for its refusal to release documents under the Freedom of Information Act (FOIA) to an animal-welfare activist seeking specifics on the alleged violations of the Horse Protection Act (HPA) by a Tennessee Walking Horse prize-winning rider and trainer.

The violations allegedly occurred at the same annual event the year prior and were adjudicated by a USDA administrative law judge in March 2017.  Nevertheless, the rider, Bill Callaway, was permitted to participate in last year’s National Celebration held in Shelbyville, TN, after which he immediately began serving the ordered eight-month suspension from “showing, exhibiting, or entering any horse…in any horse show” because of HPA violations.

On September 5, plaintiff Clant M. Seay broke the story on his BillyGoBoy website.

Seay claims that the USDA has violated his First Amendment right to obtain government documentation on Callaway’s violations and to disseminate it to the public through his website, Twitter and Facebook accounts as a citizen reporter. An attorney and resident of Mississippi, Seay filed the lawsuit in the U.S. District Court for the Northern District of Mississippi on Thursday.

Seay is founder of a citizens’ group, CCABLAC, which actively opposes the “soring” of Tennessee Walking Horses and other related breeds with the intention of effecting a higher-stepping gait as the horse competes. Soring is a practice which has been handed down through generations of horse trainers, primarily in the Southeastern United States, and involves the rubbing of mustard oil, kerosene or other irritants to the horse’s front legs.

The placement of chains on the sensitized skin as well as “stack” shoes are additional “enhancements” intended to make the horse raise its front hooves high while rocking its weight onto its back legs to minimize the pain as it walks.  CCABLAC and other horse-welfare activists call the gait the “Big Lick.”

The horse Callaway was said to have evidence in 2016 of soring, Gen’s Black Maverick, was the same animal awarded the top prize on September 2, 2017 with Callaway the rider and trainer, as Seay reported.

At midnight on September 4, Callaway began serving his suspension, which included an $1,100 fine.  Also fined $550 each were the horse’s owners, Keith and Lorraine Rosbury.

A report broadcast on Channel 5 indicated that Callaway “denied any wrongdoing” in connection with his suspension and chose to “take a deal” rather than mount a defense against the allegations.

Although many deny that soring still occurs, several former trainers have gone on the record to denounce it as painful and damaging to the horse.  In 1987, the practice was the topic of “A Current Affair” hosted by Maury Povich wherein a trainer was interviewed with his face in shadow.

Seay made his original request to the USDA for documents on Callaway on September 8, with an expected release date of October 6.  After failing to receive the documents, he filed an appeal on November 17.  At that time, Seay pledged to “take this wherever it leads.”  “If the USDA APHIS does not provide the requested documents on or before Monday, December 18, 2017,  then I will seek redress in United States District Court to require them to do so. I hope that this will not be necessary, and that USDA APHIS Administrator Mr. Kevin Shea will choose to do the ‘right thing,'” Seay posted on his website.

Just prior to filing his appeal, Seay reported that APHIS had responded to his FOIA request with:

“APHIS’ policy to neither confirm nor deny the existence of any records which would tend to indicate or reveal whether an individual or business is of investigatory interest to APHIS. Acknowledging APHIS’ interest invites the violation of individual privacy or the risk of circumvention of federal law enforcement efforts or could deprive a person of a fair trial or impartial adjudication. Therefore, APHIS will neither confirm nor deny the existence of records which would indicate whether an individual or a business is or has ever been of investigatory interest.” (bolding by editor)

On Monday, Seay provided a video update on his Facebook page from the courthouse.

Neither Republicans nor Democrats have come to an agreement on a number of proposals to strengthen the HPA to further discourage and prevent soring, although members of both parties have publicly opposed it.