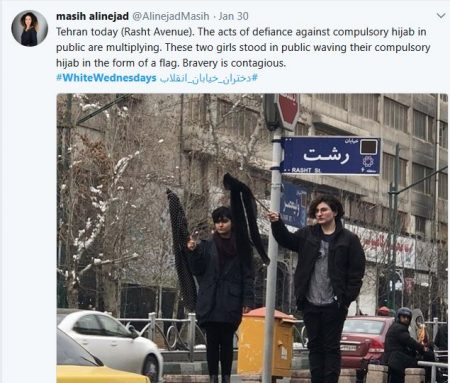 (Feb. 3, 2018) — Dramatic videos of Iranian women protesting the mandatory hijab head covering have been posted under the hashtag #GirlsofRevolutionStreet on Twitter.

On Friday, 29 women and possibly some men, were reportedly arrested in Tehran for defying the government-imposed headscarf, which has been a part of life in Iran since the nation’s 1979 Islamic revolution.

The protests began in late December when a 31-year-old mother stood on a platform in a busy section of Tehran waving her hijab on a stick.

Vida Mohaved was reported to have been arrested for her protest by The Iran Primer even though the Associated Press reported the day after her protest that the Iranian regime had pledged not to arrest women for violating the dress code.

Women have reportedly been arrested for years by the regime’s “morality police” for failing to adhere to the strict Islamic dress code.

Mohaved is now known as “the Girl of Enghelab Street.”  A hashtag campaign dubbed #Where_is_she reported on January 28 that she had been released from custody.

Following Mohaved’s protest and arrest, a social-media effort was launched by an Iranian “activist” now living in the U.S. under the hashtag #WhiteWednesdays, signifying the wearing of a white hijab on those days calling attention to the movement.

Mohaved now has her own hashtag, and many others have been created as a result of the women’s protests. 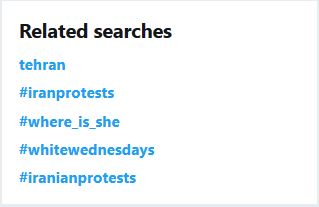 Another campaign is “My Stealthy Freedom.”

Striking historical photos from the 1940s and later, compiled by Business Insider, show that under the Shah prior to the Revolution, Iranian society was Western-leaning and imposed no restrictive dress codes.  In fact, veils and “religious garments” were “banned in public.”

Currently, men are not allowed to wear shorts or be seen in public without a shirt and can be arrested by the “morality police.”

On Friday, the U.S. State Department issued a statement supportive of the women’s protests, which reads:

The United States supports the Iranian people who are protesting against women being forced to wear the hijab. We condemn the reported arrests of at least 29 individuals for exercising their human rights and fundamental freedoms by standing up against the compulsory hijab. The United States remains steadfast in our support for the rights to freedom of religion, freedom of expression, and peaceful assembly. People should be free to choose the clothes they wear, and practice their faith as they desire. Depriving individuals of this choice undermines their autonomy and dignity.

Will Women’s Rights Change in Iran After Hijab Protests? added on Saturday, February 3, 2018