The Humanitarian Hoax of DACA: Killing America With Kindness – Hoax 20

“IT WAS ALWAYS ABOUT THE VOTES” 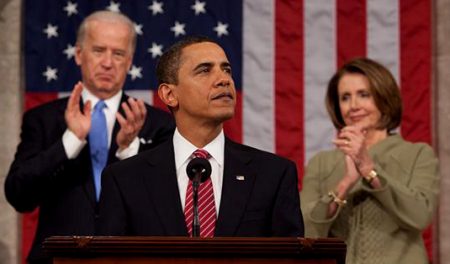 (Jan. 23, 2018) — The Humanitarian Hoax is a deliberate and deceitful tactic of presenting a destructive policy as altruistic. The humanitarian huckster presents himself as a compassionate advocate when in fact he is the disguised enemy.

Obama, the humanitarian huckster-in-chief, weakened the United States for eight years, presenting his crippling Deferred Action for Childhood Arrivals (DACA) advocacy as altruistic when in fact it was designed for destruction. His legacy, the Leftist Democrat Party with its ongoing Resistance movement, is the party of the Humanitarian Hoax attempting to destroy the capitalist infrastructure of American democracy through deceitful immigration reforms. This is how it works.

Amnesty programs for illegal immigrants guaranteed Democrat votes but Obama had a problem selling the idea to Congress even though Democrats had control of both Houses. Illegal aliens needed a new image. No problem for Obama – his Leftist image-makers went to work.

Rebranding is a marketing tool used by advertisers to sell products that don’t sell. Rebranding changes the name but it does not change the product. Dreamers are still illegal aliens. So why would Obama resort to executive overreach to sell rebranded illegal immigration?? Because Obama needed the positive image of Dreamers to sell DACA and DAPA as altruistic programs when they were actually deceitful Democrat power-grabs designed to tip red states blue. It was always about the votes.

USA Today reports that according to the Migration Policy Institute there are 3.6 million Dreamers living in the U.S. today – not the oft-repeated 800,000. “The 3.6 million estimate of undocumented immigrants brought to the U.S. before their 18th birthday comes from the Migration Policy Institute, a non-partisan, non-profit think tank that studies global immigration patterns. That is roughly a third of all undocumented immigrants in the country and does not include millions of their immediate family members who are U.S. citizens.”

The Democrat narrative is that deportations of illegal aliens would be amoral and an economic calamity. The reality is that under-educated, non-working unauthorized immigrants, whether they are Dreamers or not, drain the economy instead of improving it. The undisclosed underbelly of the Leftist narrative is that most illegal aliens living in Republican states, if awarded amnesty, would vote Democrat and tilt red states to blue. If amnesty and chain migration pass, the additional Democrat votes would put several red states in play, particularly Florida, Arizona, Georgia, and North Carolina.

Michael Cutler warns us about the consequences of DACA to national security and argues that DACA is the Immigration Trojan Horse. Cutler  contends that, “The Immigration Reform and Control Act of 1986 (IRCA) created a massive amnesty program that ultimately led to the greatest influx of illegal aliens in the history of our nation. It has been said that insanity is doing the same things the same way and expecting a different outcome.” 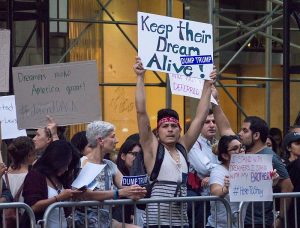 So it is with DACA. Millions of illegal immigrants awarded amnesty will vote to elect a Democrat President who will open the borders and flood the country with more immigrants who will be granted voting rights and will vote Democrat. This chain will accomplish the Leftist goal to destroy our constitutional republic and replace it with socialism. The United States of America is the greatest experiment in individual freedom and upward mobility the world has ever known. Protection of our republic is the essence of President Trump’s America-first policies.

President Trump revoked DAPA in June 2017 and ended DACA in September 2017, saying, “The legislative, not the executive branch writes these [immigration] laws.” Yet DACA continues to be discussed and marketed to a trusting public by Obama’s Resistance movement as the altruistic responsibility of compassionate American citizens.

For 241 years America has said NO to monarchies, NO to oligarchies, NO to totalitarianism, NO to authoritarianism, and NO to illegal immigration. We are a country of LEGAL immigrants, not a country of illegal immigrants. We have fought to preserve our constitutional republic with its checks and balances on power codified in our Constitution to protect our individual rights and way of life. Socialism is the great leftist scam being perpetrated on the American people and implemented through destructive leftist immigration policies.

Millennials have no idea what socialism is in practice. Socialism is most definitely not the Bernie Sanders fantasy of free stuff or the John Lennon song “Imagine” that they are being indoctrinated with. Socialism is an infantilizing political structure in which there is no private property and the government owns all means of production. Citizens are wards of the state and subject to the whims of the government. The government tells its dependent subjects what they can have and how much they can have. There is no freedom or upward mobility in socialism because there is no private ownership. There is only the ruling elite and the enslaved population who serve them. The American dream is dead in socialism.

Unrestricted immigration, particularly Dreamers and chain migration, will ultimately transform America the beautiful into a socialist state. The American dream will be sacrificed to DACA Dreamers. Why? The answer is that socialism is the prerequisite political infrastructure to internationalize sovereign countries in preparation for one-world government. Globalism’s one-world government is the hidden motive for the Leftist Democrat policies that endorse the humanitarian hoax of DACA and chain migration.

Socialism is deceitfully marketed as the great equalizer – the social system that will provide social justice and income equality. Socialism is the big lie of the 21st century because in reality socialism only benefits the elitists who rule the country. All anyone has to do is look at Cuba and Venezuela, where the rulers live like kings and the ruled suffer shortages, deprivation, and poverty.

We cannot allow DACA Dreamers to tilt America toward leftist socialism which robs all Americans of their liberty except the elitists in power. Choosing the Dreamers’ dreams over the American dream is a lethal choice that will end our constitutional republic – but that was always the point of the humanitarian hoax of DACA – to kill America with “kindness.”

3 Responses to "The Humanitarian Hoax of DACA: Killing America With Kindness – Hoax 20"