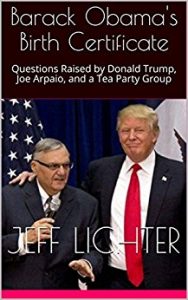 The investigation, launched by then-Maricopa County Sheriff Joseph Arpaio in August of that year and delegated to his Cold Case Posse, was originally aimed at “clearing the president” so that Arizonans could be confident that their votes would not be disenfranchised in the 2012 presidential election.

Instead, on March 1, 2012, CCP lead investigator Mike Zullo declared the image a “computer-generated forgery.”  The investigation also found Obama’s Selective Service registration form to be fraudulent and eventually consulted with two forensic analysts, who agreed that the birth certificate image is not genuine.

Despite the enormous ramifications, the mainstream media showed no curiosity about the findings and frequently derided anyone with doubts about Obama’s background, citizenship or birthplace as a “birther.”

Lichter’s book, titled “Barack Obama’s Birth Certificate,” also recounts his participation in a meeting hosted by Donald Trump at Trump Tower in New York on April 8, 2011.  Trump had been an early vocal proponent of the Obama White House’s eventual release of the “long-form” birth certificate image and claimed credit for its unveiling to the public on April 27, 2011.

The meeting at Trump Tower encompassed Lichter’s idea of Arizona’s writing of legislation requiring that presidential candidates prove that they meet the requirements set forth in Article II, Section 1, clause 5 of the U.S. Constitution, including that he or she is a “natural born Citizen.”

With the  sponsorship of Rep. Carl Seel, a bill passed the Arizona House and the Senate on April 15, 2011.   However, four days later, then-Gov. Jan Brewer vetoed it, terming it “a bridge too far.”

There remain many unanswered questions as to why, since the early 1990s, major media have reported significant disparities in Obama’s life story to include his country of birth, the age at which he allegedly went to live in Indonesia with his mother and her new husband, and two different hospitals in Hawaii where he purportedly was born on August 4, 1961.

Lichter’s book, now available at Amazon on Kindle, was born out of an initial project in which he is collaborating with approximately 11 other writers.  A free sample from chapter 1, titled “About Donald Trump,” can be read here.

“I had never written a book,” Lichter told us on Monday afternoon.  “Hopefully I wrote it right,” he said with a laugh.  He said he had assistance from his wife in editing, although he found Kindle’s grammar and syntax-checker helpful.  “When you submit a book to Kindle, they actually point out spelling errors and help you rearrange the words,” Lichter said.

Lichter estimates that the writing of the book consumed between 10 and 15 hours of his time.  He began by using material he developed for the collaborative work, which is still in progress.  “In that one, I wrote a lot about things that weren’t relevant to this — my childhood and not being a racist — but I also got into the ‘birther’ stuff,” Lichter said.  “I took the material that was relevant to the Surprise Tea Party and put it in this and built around it.  So it’s a totally different book.”

A paperback version is planned for the near future, Lichter told us.

Looking back to August 2011 when the citizen group approached Arpaio, Lichter said, “I think what the Surprise Tea Party did was very unique.  We’re probably the only Tea Party group that took up the issue or did anything about it in the whole country.  I thought it was a story I could tell and get it out there.”

Lichter had previously told The Post & Email about his meeting at Trump Tower on April 8, 2011 just one week prior to the Arizona legislature’s passage of the presidential eligibility bill.  Afterward, Lichter sent research he had compiled about the historical and constitutional meaning of “natural born Citizen” to Trump but never received a response.

At the opening of our interview, Lichter said that he appreciates every day, a reminder of a medical ordeal which nearly took his life in 2014.  He said that he felt it important to feature a photo in the book of Arpaio visiting him while he was still quite ill.

Lichter recalled that when the 242 Tea Party members approached Arpaio to ask for an investigation into the long-form birth certificate image in August 2011, they predicated it on “a law enforcement question.”

“The sheriff didn’t know what we were coming for.  We got in there and told him it was about the birth certificate, which was a surprise for him, so he invited in his lawyers and communications staff.  They were all talking against it and said, ‘Sheriff, don’t do it,'” Lichter recalled.  “So we kept talking, and I remember looking at another Tea Party member thinking, ‘This isn’t going so good.'”

“Was Sheriff Joe aware of the birth certificate image’s existence?” we asked, to which Lichter responded, “I remember in a previous meeting bringing it up, and he made a joke about it then, but he knew it was an issue.  Whether or not he followed it, I don’t know.”

“Does Sheriff Joe know you wrote the book?” we asked.

Lichter responded, “I actually got his ‘OK,'” then said with a laugh, “but I did not bother the President of the United States.”