WHO IS “STINGING” WHO? 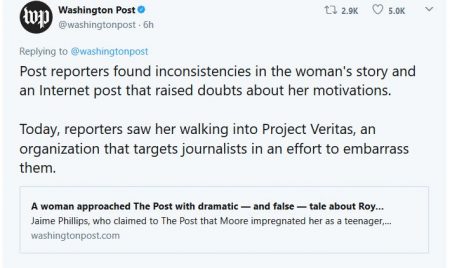 (Nov. 27, 2017) — On Monday afternoon, Project Veritas released an undercover video it took of a Washington Post reporter and a technical employee speaking about company culture and whether or not bias against Donald Trump exists within it.

As best as The Post & Email can determine, shortly thereafter, The Washington Post published an article stating that a woman who identified herself as “Jaime Phillips” approached them several weeks ago and related a “false” story about U.S. Senate candidate Roy Moore, about whom the newspaper published a number of articles beginning on November 9 from women who claimed that Moore initiated romantic or sexual contact with them when they were teenagers and he was in his early 30s.

The Post said it found that after checking Phillips’s background, it appeared to them that she was participating in a “sting operation” associated with James O’Keefe’s Project Veritas, particularly because they saw her enter the organization’s Mamaroneck, NY office on Monday morning and remain inside “for more than an hour.”

Various tweets later on Monday said that O’Keefe capitalized on the outing of PV’s embedded WaPo “reporter” by sending out the following email interpreted to be a solicitation for donations. 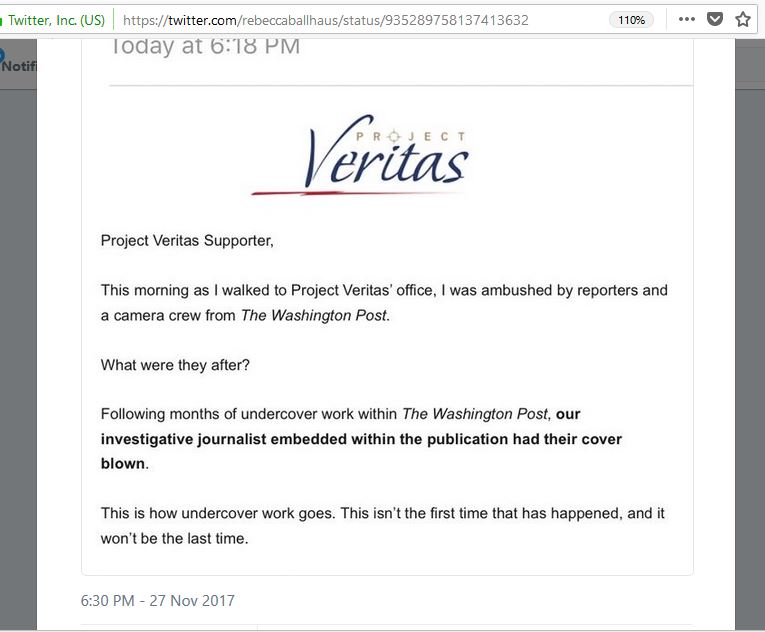 The Post & Email has received O’Keefe’s newsletters in the past unsolicited but did not receive the one pictured above.  If the email O’Keefe sent is presented in its entirety here, it does not ask for donations, but rather, refers to a confrontation O’Keefe experienced with a WaPo reporter and his videographer that morning after which O’Keefe claimed to have gained the upper hand when both men located their vehicles in a nearby parking lot and drove away.

A tweet from The Post’s Dave Weigel contains the tweet featuring the alleged email solicitation in which a Rebecca Ballhaus said that it “refers to woman who falsely told [WaPo reporter] @bethreinhard she was impregnated by Roy Moore as ‘investigative journalist embedded within the publication.'”

Reinhard was another of the three co-authors of the November 9 article.

For his part, Weigel wrote, “But in his flop sweat video from earlier today, O’Keefe suggested that the reporter wasn’t his.”  Where and when O’Keefe intimated as much is unclear. 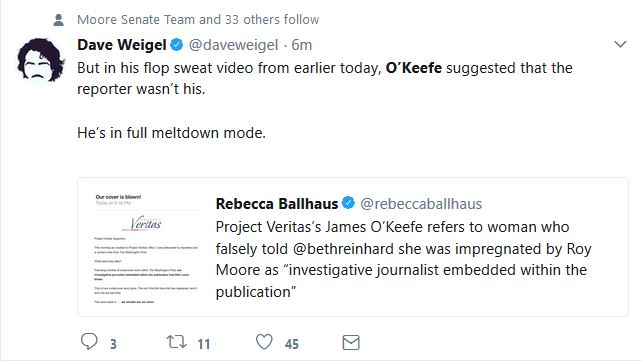 If complete, the email does not state what Ballhaus claims, but rather, that PV’s investigative journalist reportedly embedded at The Washington Post had been exposed “following months of undercover work.”

Phillips was never reported by The Post to have been “embedded.”

The Post accurately reported that O’Keefe refused to answer questions about any involvement his organization might have had with Phillips.  When the WaPo reporter asked O’Keefe and his associate on Monday morning if “Jaime Phillips” worked for Project Veritas, O’Keefe said he was “busy” and did not respond.  When asked if he “disputed” that Phillips worked for PV, O’Keefe responded, “I am not doing an interview right now.”

O’Keefe was subsequently excoriated on Twitter for using unethical tactics and being a purveyor of the “fake news” he has often decried in his videos and tweets.  Elsewhere on the internet, writers celebrated The Post’s apparent exposure of Phillips as an easily-detected fraud and her assumed association with PV.

The audio-video of the conversation between Phillips and McCrummen reveals that at approximately the 12:00 mark, McCrummen asked to see Phillips’s license in order to begin her “due diligence” prior to any article which might be written about Phillips’s information.

It also demonstrated McCrummen’s continuing the interview after telling Phillips that her reported employment could not be verified and confronting her with a statement Phillips appeared to have made online revealing a desire to expose the “liberal MSM” (mainstream media).

Despite those inconsistencies, McCrummen repeatedly gave Phillips “chances” to “add a little more” to clarify her background and “why you are here.”

While it is possible that WaPo’s conclusion that Phillips was or is working for O’Keefe is accurate, The Post & Email has seen no conclusive proof as of this writing.

On Monday evening, we contacted Project Veritas through its media address and asked the following:

Hello, earlier I wrote an article about your release today of video taken of Washington Post reporter/tech employees regarding the company culture.

However, WaPo has released an article, as you must know, claiming that PV sent an “undercover reporter” to relate a false story about U.S. Senate candidate Roy Moore.

Although WaPo and many others appear to believe that your “undercover reporter” and the woman named Jaime Phillips, who related the false story, are the same, I am unclear on it, as The Post said that the woman approached them with the story as if for the first time.

Could you clarify if your reporter embedded within The Post is the same person as the woman who called herself Jaime Phillips?

The Post & Email will report if and when it is clarified that Phillips did or did not work for PV in any capacity.

Just as The Post & Email was about to post this article, we noted a tweet from PV employee Laura Loomer and a response from radio show host Mark Simone (obscenity removed after the word “talking”): 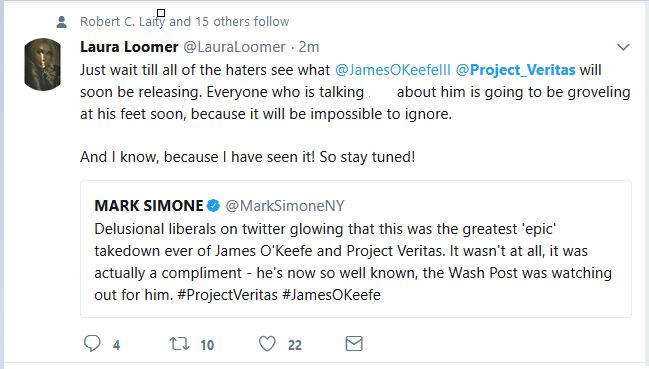