A CERTAIN “POINT OF VIEW” 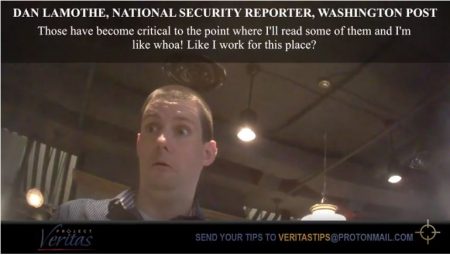 (Nov. 27, 2017) — James O’Keefe of Project Veritas has released a new video in which his undercover journalists filmed certain reporters at The Washington Post appearing to admit that the newspaper has an agenda which includes casting President Donald Trump in a poor light.

The video is part of O’Keefe’s “American Pravda” series exposing major media as having less-than-sterling ethics and a “very biased agenda,” according to the 33-year-old “guerilla journalist.”

The latest video begins by featuring Washington Post national security reporter Dan LaMothe stating that the newspaper is overly critical of Trump because of its particular “point of view.”

LaMothe said that The Post’s reporting “is right,” meaning “accurate,” but that he believes certain items receive too much coverage because they are “sensational.”  He claimed that if Trump were to leave office, the paper’s readership would be reduced by “40%.”

Of The Post’s “competition” at The New York Times, LaMothe said some of “the Grey Lady’s” reporters are “way over the top.”

The Post’s Director of Product Joseph Marburger told Veritas’s undercover reporter that the paper’s new slogan, “Democracy dies in darkness,” adopted after Trump was elected, was coined by the paper’s owner, Amazon.com CEO Jeff Bezos, who was recently stated to be the “richest man in the world.”

Bezos bought The Washington Post from the Graham family in 2013 for $250 million.  Some perceive that the 144-year-old publication has taken a sharp left turn politically since Bezos acquired it.

Toward the end of the video, O’Keefe referenced an encounter on Monday morning with a WaPo reporter and videographer wherein he said they attempted to “turn the tables” on him by adopting his own confrontational but cordial style toward the subjects he questions.

O”Keefe promised that more videos of WaPo employees are forthcoming.

In the past, Project Veritas has produced videos of those working within newsrooms at CNN and The New York Times as well as instances of what appear to be election officials condoning fraudulent voter activity.  Last year, Project Veritas carried out a sting of a Democrat political action committee which appeared to indicate that there was coordination with the 2016 Hillary Clinton presidential campaign and resulted in a resignation and a termination.

As of publication of this article (7:00 p.m. EST), The Washington Post has a story trending on Twitter claiming that PV sent an associate to relate a story about U.S. Senate candidate Roy Moore which its reporters discovered in the course of its “rigorous” vetting process.