“PLOTTING BEHIND THE SCENES”

(Nov. 17, 2017) — In a fundraising solicitation which came to our attention on Friday afternoon, Alabama U.S. Senate candidate Roy Moore, who has been accused by three women of sexual misconduct between 1977 in 1991, is alleging that Senate Majority Leader Mitch McConnell is “working behind the scenes” with California’s super-lawyer Gloria Allred, who represents one of the women making such claims.

On November 9, The Washington Post published an article in which it named four women accusing Moore of improprieties, although only two rose to the level of a possible criminal violation.  In follow-on articles, several other women claimed that Moore flirted with them as they worked at a local mall, causing them to seek to avoid contact with him.

On Monday afternoon, Beverly Young Nelson, with Allred at her side, gave a tearful press conference in which she accused Moore of sexual assault and battery in December 1977 or early January 1978. Young Nelson claimed she worked as a waitress at the Old Hickory House in Gadsden, AL when Moore, over period of time, flirted with her, signed her high school yearbook, and eventually offered her a ride home during which the alleged assault took place.

Moore has denied all of the claims, including those in which he allegedly dated “underage girls.” In regard to the claim that he purchased wine for an 18-year-old young woman when the legal drinking age was 19, Moore told Sean Hannity on his radio program last Friday that he lives in a “dry county” where liquor is not served.

The Post & Email receives various announcements from both major political parties on a regular basis.

Friday’s email from Moore is titled, “BRING IT ON: McConnell wants a fight” and begins:

After 40 years of slugging it out day in and day out with the forces of evil trying to rip apart the moral foundations of our society, I’ve had enough.

I apologize for my tone, but McConnell crossed the line by assaulting my integrity and character as a Christian man through his false accusations against me.

So if McConnell wants a fight — I’m going to give him a fight.

And I don’t plan on holding back the punches.

He then asked for campaign contributions, just as his opponent, Doug Jones, did in a campaign solicitation received by this writer on Friday morning.

Moore is asking supporters to contribute to his “Victory Fund” with a smaller version of the graphic used as the logo in his newsletter.

Just below the graphic shown above, the notice reads:

The sad truth is, Mitch McConnell and the national GOP are working hand-in-hand with liberal Democrats to steal the election away from the good people of Alabama.

Worse yet, McConnell is plotting behind the scenes with liberal Gloria Allred — who takes credit for passage of Roe v. Wade — in a nasty and vicious smear campaign against me.

On Friday morning, Moore’s wife Kayla, along with a number of other women, gave a press conference reiterating their support for Moore’s candidacy and determination to see that Washington, DC bureaucrats do not impose their will on Alabama voters. 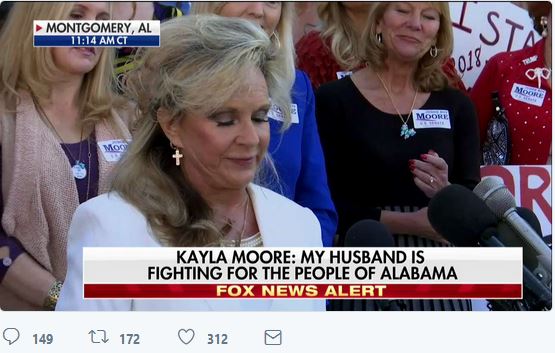 Moore has served as Etowah County assistant district attorney, as a Circuit Court judge, and as the twice-elected Chief Justice of the Alabama Supreme Court, an office from which he was twice removed over national controversies.  On the first occasion, Moore insisted that a Ten Commandments monument be allowed to stand at the Alabama Supreme Court building, and on the second, he told Alabama judges that a U.S. Supreme Court ruling “legalizing” same-sex marriage did not necessarily apply to the state of Alabama because of the state’s constitutional amendment defining marriage as between one man and one woman.

On Wednesday afternoon, Moore’s attorney, Phillip Jauregi, and campaign manager, Bill Armistead, gave a press conference during which Jauregi asked Allred to release Beverly Young Nelson’s yearbook to a “neutral custodian” so that the handwriting alleged to be Moore’s could be analyzed by a handwriting expert of their choosing. Jauregi added that Allred could send her own handwriting specialist if she so chose.

On Wednesday night, Allred spoke with Don Lemon and Wolf Blitzer of CNN and stated that she would not release the yearbook unless the Senate holds hearings to address the claims made by women against Moore over the last week. Allred has asked both the Senate Ethics Committee and the Senate Judiciary Committee to hold hearings “within two weeks.”

The special election to fill the seat vacated by Jeff Sessions is scheduled for December 12.

On Thursday night, Moore tweeted that McConnell “needs to step down.”  At the same time, he said, “This is an effort by Mitch McConnell and his cronies to steal this election from the people of Alabama and they will not stand for it! #ALSEN“. 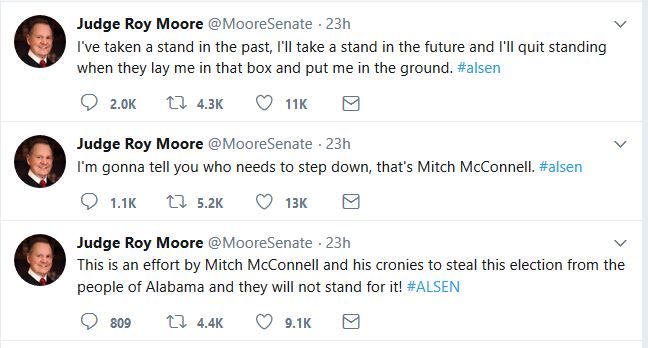 Both Moore and his wife have stated that they plan to sue The Washington Post for its November 9 article.

On Wednesday night, AL.com published an article in which two additional women shared their alleged encounters with Moore:  one who said he asked her on a date when she was 17 and another who claimed that Moore groped her as she exited his law office in 1991.

Reporter Anna Claire Vollers did not respond to The Post & Email’s questions regarding the circumstances under which Tina Johnson made her allegation of groping expressed in the article.