What Will Hannity Reveal on Monday Night? 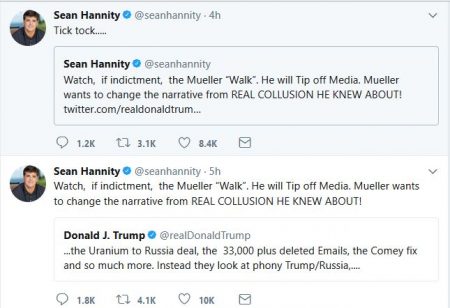 (Oct. 29, 2017) — On Sunday afternoon, “Hannity” host Sean Hannity suggested, in response to a tweet from President Donald Trump, that Special Counsel Robert S. Mueller, III “will Tip off Media” [sic] in the event of a declaration of an indictment associated with the “Russia” investigations.

On Friday, CNN reported that the “first charges” were filed against unnamed parties as a result of Mueller’s two-pronged probe into alleged Russian “meddling” in the 2016 U.S. election and alleged Trump campaign “collusion” with Russian operatives.

A federal grand jury reportedly believed there was sufficient evidence to issue an indictment or indictments based on information presumably presented to its members.

On Friday Hannity tweeted that the Russia investigation is “a distraction” and that “Monday I’ll have the details.  TICK TOCK…..!”

News that a grand jury had been empaneled and reportedly issued subpoenas was apparently leaked in August. The latest “leak” regarding the alleged impending indictments may be a crime, according to New Jersey Gov. Chris Christie, who holds a law degree.

Trump’s tweet was one of five he issued on Sunday on the topic of “Trump/Russia collusion,” which included his decrying the “lack of investigation” into former Democratic presidential contender Hillary Clinton’s relationship and dealings with Russia during the years of the Obama regime. 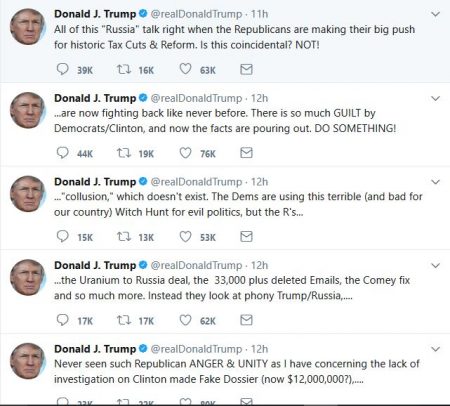 Recent revelations that the DNC helped to fund the Trump opposition-research “dossier” last year and that Clinton may have had knowledge of it are now being reported by even the mainstream media, which normally shields Democrats from scrutiny.

Over the last two weeks, The Hill’s John Solomon and Circa’s Sara Carter have broken new developments relating to the DNC; Clinton; the Clinton Foundation; sale of uranium to Russia; the opposition-research firm, Fusion GPS, and the involvement in the “Uranium One” arrangement of Obama-regime cabinet members.

Mueller’s legitimacy as Special Counsel has been brought into question given that he was FBI Director when 20% of the U.S. uranium supply was sold indirectly to Russia through a Canadian company, Uranium One, even as the FBI was investigating criminal activity associated with the “deal.”

As Mueller leads the investigation into alleged Trump-campaign “collusion” with Russian operatives, it appears he not only knew of, but also participated in, the facilitation of the Uranium One arrangement which benefited Russia with nuclear material in 2010 but beginning in 2009.

On August 2, 2017, Infowars reported that Mueller’s role in supplying a uranium sample to Russia in September 2009 is “under investigation.”  However, a caption beneath the video of Infowars’s Alex Jones’s broadcast that day mistakenly identifies Mueller as a “Republican Congressman.”

on Friday, The Washington Examiner’s Byron York reported that the financial supporters of The Washington Free Beacon provided funds for an initial Fusion GPS research project aimed at collecting information about Trump.  “Lawyers for the conservative publication Washington Free Beacon informed the House Intelligence Committee Friday that the organization was the original funder for the anti-Trump opposition research project with Fusion GPS,” York wrote.  “The Free Beacon funded the project from the fall of 2015 through the spring of 2016, whereupon it withdrew funding and the project was picked up by the Democratic National Committee and the Hillary Clinton campaign.”

The Free Beacon did not deny that it provided funding to Fusion GPS but said that the research it paid for covered more than one Republican candidate and did not involve former MI6 agent Christopher Steele or a “Russia” component.  “Steele was retained by Fusion GPS when the project was funded by Democrats, and not in its initial phase, when the Free Beacon was involved,” York reported the Free Beacon said in its response.

As of publication time, Hannity’s last comment on the Mueller matter is “Tick Tock….,” a term he has used in the past to denote an impending significant announcement on his FNC show, which airs Monday through Friday at 9:00 p.m. ET.

What Will Hannity Reveal on Monday Night? added on Sunday, October 29, 2017

6 Responses to "What Will Hannity Reveal on Monday Night?"