MAN WHO CLAIMS TO HAVE ANSWERS NOT CONTACTED BY ANYONE IN U.S. GOVERNMENT 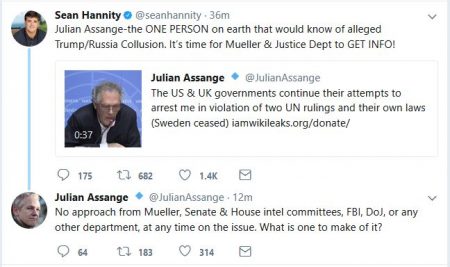 (Oct. 16, 2017) — On Sunday night, commentator and “Hannity” host Sean Hannity tweeted that WikiLeaks founder Julian Assange is “the ONE PERSON on earth that would know of alleged Trump/Russia Collusion. It’s time for Mueller & Justice Dept to GET INFO!”

Assange, who Hannity has interviewed on five occasions, responded to the tweet with, “No approach from Mueller, Senate & House intel committees, FBI, DoJ, or any other department, at any time on the issue. What is one to make of it?”

Special counsel and former FBI Director Robert S. Mueller, III was appointed last May to lead the ongoing investigation into whether or not anyone from the Trump campaign “colluded” with Russian-government operatives to affect the outcome of the presidential election. The two-pronged investigation also encompasses whether or not the Russian government interfered in the election.

The U.S. House and Senate Intelligence Committees are each steering their own investigations into the same matters.  On October 4, the chairman of the Senate Intel Committee, Richard Burr, held a press conference in which he said that no evidence of “collusion” has yet been found.

Trump has denied any coordination with the Kremlin during the campaign and maintains that the “Russia” narrative arose after Hillary Clinton unexpectedly lost the election.

Hannity has spoken about Assange frequently since Rep. Dana Rohrabacher met with Assange in London in mid-August.  Following that meeting, Rohrabacher claimed that Assange told him he has proof that the thousands of compromising DNC emails WikiLeaks published beginning in July of last year were not provided to him by a “state party” despite members of the U.S. intelligence community insisting that the Kremlin ordered and carried out the breach.

During sworn testimony in January, then-FBI Director James Comey said that the FBI never examined the DNC server. However, just over two weeks ago, Trump confidant and former campaign advisor Roger Stone stated publicly that a two California congressmen said during his closed-door session with the House Intel Committee that the FBI had, in fact, examined the DNC server.

Stone’s after-testimony statements were not reported in the mainstream media.

Prior to the hearing, Stone released a statement in which he claimed that “members of this Committee have made irresponsible, indisputably, and provably false statements in order to create the impression of collusion with the Russian state without any evidence that would hold up in a US court of law or the court of public opinion.”

In a face-to-face interview with President Trump last Thursday in Pennsylvania, Hannity stated that Assange also possesses evidence that Trump campaign aides did not “collude” with Russia in order to take the election in their candidate’s favor.

Rohrabacher has suggested that Assange is interested in offering to provide the evidence he claims to have in exchange for the U.S. Justice Department abandoning its declared desire to prosecute him as “a priority.”

In interview with Rohrabacher in late August, Hannity invoked the name of “Kim Dotcom” without any elaboration. A supporter of WikiLeaks, Dotcom has claimed on several occasions to “know” that DNC staffer Seth Rich, fatally shot in the back in July of last year, was the source of the emails provided to the government-transparency organization founded by Assange 11 years ago.

In late May, Dotcom offered to travel from his home in New Zealand to testify to Mueller or any of his subordinates regarding the evidence he claims to have about the DNC emails and Rich. Despite facing extradition himself by the U.S. Justice Department for alleged copyright infringement for a file-sharing website he founded in 2007, Dotcom’s attorneys wrote a formal letter to Mueller proposing the arrangement if their client could be guaranteed safe passage to and from the United States.

Neither Mueller nor anyone on his investigative team responded.

In mid-May, Fox News and Hannity, in particular, were viciously targeted by the mainstream media after reporting that there appeared to be evidence tying Rich to the emails and attachments which WikiLeaks began releasing on July 22, 2016.

Hillary Clinton has blamed WikiLeaks, among a long list of other organizations and individuals, as bearing responsibility for her loss in November.  Most recently, in an interview with ABC News in Australia on Monday, she labeled Assange “a kind of nihilistic opportunist who does the bidding of a dictator,” meaning Russian President Vladimir Putin.

Also on Sunday evening, Assange issued a tweet in which he called Clinton “not a credible person.” 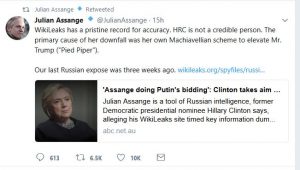 In response, Hannity tweeted, “People need to READ AND LEARN. @JulianAssange HAS THE TRUTH.”

4 Responses to "Do Investigators Really Want the Truth about Russia “Collusion,” Election Interference?"