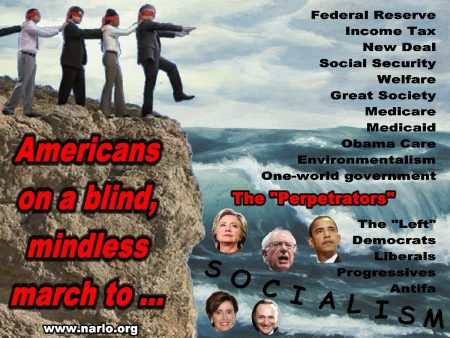 (Sep. 24, 2017) — “The only reason that Democrats care for the poor, the downtrodden, the sick, the infirm, the disabled, the Blacks, the Latinos, the LGBT crowd and other minority groups is for the votes they hope to garner by pandering to them, because political power is their only objective.  The only reason they lobby for and pass unconstitutional socialist legislation is to buy these groups off for their votes.  In their politically driven hearts they care not one whit for these groups.  Sadly, they cannot help themselves because after five generations of liberal indoctrination, this Progressive genetic disease is firmly embedded in their gene pool.”  Ron Ewart

A few days ago, a columnist in The Washington Post wrote this:

“When Bernie Sanders launched his bid for the Democratic nomination, he was often asked whether he, a democratic socialist, would actually become a Democrat.   Now, more than a year after he ignited a movement with his unsuccessful bid, that question is moot.  The Democrats have become socialists.”

“This became official, more or less, Wednesday afternoon, when Sanders rolled out his socialized health-care plan, Medicare for All, and he was supported by 16 of his Senate Democratic colleagues who signed on as co-sponsors, including the party’s rising stars and potential presidential candidates in 2020: Elizabeth Warren, Cory Booker, Kamala Harris and Kirsten Gillibrand.”

The Democrats have now finally come out of the closet and admitted that they are avowed socialists.  For those of us with any intellect at all who have been watching the Democrats for the last 60 years, we have known for at least that time that Democrats were and are socialists.

With a close look at FDR’s New Deal and Social Security and his “Americans-have-many-more-rights-than-the-first-10-Amendments” speech in 1944, FDR was a socialist.  After FDR came Norman Thomas, five-times presidential candidate for the Socialist Party, made it official when he was purported to have said:

“The American people will never knowingly adopt socialism. But, under the name of “liberalism,” they will adopt every fragment of the socialist program, until one day America will be a socialist nation, without knowing how it happened.  I no longer need to run as a Presidential Candidate for the Socialist Party.  The Democratic Party has adopted our platform.”

We may take some hits for writing this since millions of Americans depend almost entirely on Social Security benefits, but Social Security was the second Government socialist trap.  It is also very likely that Federal Reserve actions led to the Great Depression, which then led to FDR, the New Deal and Social Security.

In 1950 16.5 workers paid into the system that supported 2.93 million people receiving SS retirement benefits.  Today, that number has reduced to three (3) workers paying for 55 million SS retired recipients.  The hard fact is, the funding mechanism for Social Security and its affiliated programs are unsustainable and will be broke by 2036, if not sooner.  There is no SS lock box.  The lock box is filled with government IOU’s which the government will have to borrow in order to pay SS retirees, increasing the nation’s debt.

Social Security (SS) is not a constitutional right even though you are forced to pay money into it.  SS is entirely a social program invented by government that the government can take away any time it feels like it.

Your SS number was originally to be a totally private number but now it is essentially your debtor number for the nation’s debt.  It is also your national identification number that is used to identify you by government and private enterprise.  It can easily be hacked or created out of thin air by knowing how the number is designed.  It can be used to steal your identity and trash your credit.  The credit-reporting agency Equifax just reported that 143,000,000 Americans’ SS numbers and other private information have been stolen (hacked) by bad actors, and now half the adult American population is exposed to identify theft.  That’s criminal negligence and should be prosecuted.

Your SS number is everywhere!  Not only does the government have your SS number but your doctor, your dentist, your insurance agent, the telephone company, your health insurer, your Internet provider and any one of many of your debtors, including your mortgage holder, has it in their files as well and on their computers subject to hacking.  Every time you want information from the government or one of these private agencies they ask you for your SS number.  But did you know that it is a federal crime for someone in private enterprise to “compel” you to disclose your SS number?

So your doctor or other health care provider can compel you to disclose your SS number because of Medicare and Medicaid but no other private entity can, and if they do they are guilty of a felony.

The Social Security System and your SS number have been battered, tweaked, changed, modified and bastardized by Congress and SS Administration rule-making since it was signed into law by FDR in 1935.  Here are some highlights for SS Number disclosure requirements.

You might just as well have your SS number tattooed on your arm.  It is abundantly obvious that your Social Security number being private is gone forever.  Everyone has it, including the bad guys.

The advance of socialism in America starting with the 16th Amendment and then Social Security has been fast and relentless, driven by Progressives buying votes.  In the early ’60’s came President Johnson’s Great Society, which increased welfare costs almost exponentially.  Did the number of welfare recipients decrease?  Hardly!  It just drew more “pigs” to the government “pig trough.”  It has weakened the human fabric of America, increased urban poverty and broken up the nuclear family, especially in the black precincts, with a financial sledgehammer.

But that wasn’t enough socialism for the Democrats.  Along came more welfare, food stamps, Medicaid, Medicare and now Obama’s ObamaCare that is sending health premiums skyrocketing and medical services into disarray.

Each one of these social programs is rife with waste, fraud, abuse and corruption and multiple government programs for bad actors to take advantage on the backs of the taxpayer.

How much do Medicaid and Medicare cost the American taxpayer?  Medicare spending grew 4.5% to $646.2 billion in 2015.  Medicaid spending grew 9.7% to $545.1 billion in 2015, probably due to ObamaCare Medicaid expansion.  Twenty percent waste, fraud and abuse amounts to $24 billion down the drain because government can’t run any program efficiently.

Now along comes former presidential candidate Bernie Sanders and his socialist acolytes (Democrats all) and wants universal, single-payer Medicare for every person in America, without regard to the cost.

Add it all up, ladies and gentlemen, and America is broke and going deeper in debt.  It has been broke for decades, all at the hands of Democrats and Progressives.  Somewhere down the line someone is going to have to pay the lender and it could very well cause chaos and revolution in America.  If no one GETS IT and is willing to fix it, then chaos and revolution are virtually assured and another experiment with freedom will have failed ….. miserably and violently!

How many of you GET IT?