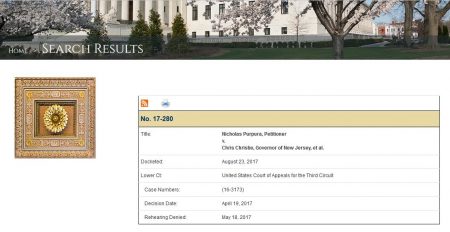 (Sep. 23, 2017) — As was recently reported by TPATH, a pro se lawsuit challenging New Jersey’s restrictive gun statutes filed more than two years ago in the U.S. District Court for the District of New Jersey has received a docket number from the U.S. Supreme Court.

An extensive compilation of documents generated by the case, Purpura v. Christie, et al, 3:15-cv-03534, as it proceeded through the district court and Third Circuit Court of Appeals is provided by TPATH here in conjunction with SAPPA, the citizens’ organization lending its support to the cause.

The plaintiff, Mr. Nicholas E. Purpura, told The Post & Email in an interview on Thursday that although the surface issue is the curtailment of the Second Amendment by the New Jersey legislature, governor and other government functionaries, the underlying and more important issue is one of “federalism.”

New Jersey requires an applicant for a pistol permit to prove that he or she possesses a “justifiable need” to carry a gun outside of the home.  Although Gov. Chris Christie has expressed opposition to the “justifiable need” statute, last year vetoing two bills which he said sought “to further impede a citizen’s Second Amendment right to own a firearm in the State of New Jersey,” the requirement remains in place.

The case was first assigned to U.S. District Court Judge Michael A. Shipp, who presides over matters in Trenton.  In his initial filing, Purpura named Christie, New Jersey Senate President Steven M. Sweeney, Assembly Speaker Vincent Prieto, et al, the superintendent of the New Jersey Firearms Division, and other government officials as defendants, claiming that they have willingly participated in a “scheme” to restrict Second Amendment rights in the state, thereby denying the citizens of certain “civil rights.”

On page 11 of the case PDF, Purpura claimed that the defendants “willfully combine, conspire, confederate, and agree together with each other in a ‘wheel of conspiracy‘ through a pattern of activity in violation of the ‘Multiple Conspiracy Doctrine’ and RICO under a single ‘enterprise conspiracy,’ to restrict a constitutional right.” [Link added to relevant case document by The Post & Email].

On May 4, 2016, Shipp denied Purpura’s request for oral argument, after which Purpura appealed to the Third Circuit Court of Appeals in Philadelphia.

Purpura contended that the District Court and Third Circuit Court of Appeals issued opinions in his case in direct contradiction of prior U.S. Supreme Court rulings in three different sections.  “I could have won in all three of them:  contradictions to their rulings about administrative law; contradictions for failing to address RICO properly; and lastly, outside of Heller, McDonald and Caetano, the Supreme Court had previously ruled on what the courts could do about the Second Amendment,” Purpura said.  “They didn’t address that this had already been decided.”

Frequently mentioned in Purpura’s filing with the District Court was the 2014 New Jersey case of Drake v. Jerejian, whose issues, also appealed to the U.S. Supreme Court from the Third Circuit, were stated as:

The NRA and 19 other states joined Drake in his effort to obtain a ruling that the “justifiable need” standard is unconstitutional.  In his writ, Purpura faulted the Third Circuit for an “abuse of power” which he said, in its Drake decision, “placed the value of an ideologically produced and incomplete study in higher regard than the U.S. Constitution.”

In preparing the writ for the Supreme Court, Purpura told us, “The only one who helped me, and I give him kudos, was Dwight (Kehoe, TPATH Editor) because I get too technical.  I failed English, and I need help with my grammar.  But as far as the research, I did that all myself.  If I hadn’t, I would have had to tell the court.”

Purpura added that the “docket number” does not necessarily mean that the case will be granted oral argument by the high court.  “What we have to be careful of is the clerks.  They have a pool of clerks, and a lot of them get there by political connections.  Many of them have political ideology of ‘left lane.’  I have it from a law professor at Notre Dame that they often tell the chief clerks for the Justices, ‘It’s not worth hearing this,’ and they ignore it; they don’t read it.  The only way we’re going to get anywhere is by publicity.”

I’m not arguing this; what I’m doing is confirming the arguments previously made by the Supreme Court of the United States.  This not a Second Amendment case; this is about federalism.

The point is this:  here you have limited speech now from our First Amendment; the Second amendment is ignored totally because they don’t like it.  The Fifth Amendment on due process is a farce, because what they do is dispose of any matter…they say, “Oh, technicalities do not work on a pro se case.”

The other thing they do is say they don’t have “subject matter jurisdiction.”  That’s not true, either, if you read my brief.  If you look at the original petition, I’ve covered that with 50 Supreme Court precedents.  There are hundreds of them out there.

The biggest thing is the illegal behavior of the judiciary.  These judges violated the law.

Speaking of the activity in the case in its early stages, Purpura said:

The defense’s attorneys failed to adhere to the law, and the judges gave them extra time which they had no jurisdiction to do. They did everything to dispose of this matter.  They demanded that I redo it.  I wasn’t going to redo it; I stood firm on my brief.

“Why did you not begin the case at the state level?” The Post & Email asked.

I started at the federal court because it’s a federal question.  The state court in New Jersey is a cesspool of left-wing judges who could care less about the law.  The case here involves RICO.  The state legislature had no authority to write it into law because it violates the Constitution.  You can’t do what they did.

They ignored the statute and federal law.  They turned around and had the audacity to say, “Your brief was too complicated.”  It wasn’t complicated if they read it.  What it was is that there was no way for them to refute it, so what they did is try to use the excuse that they didn’t have subject matter jurisdiction, which is a complete farce, because one always has subject matter jurisdiction on a constitutional challenge.  I could have written it on a napkin, and they had to read it and answer.

Standing?  You mean to tell me that I haven’t incurred any injury?  Injury could come 13 years from now and they would have to hear it.  There’s imminent risk of harm.  Justice Ginsburg said, “Hey, folks, you don’t have to have injury if someone’s rights are violated.  You could argue this for a third party, so you can’t have a law that is no law at all.”

[Editor’s Note:  Purpura referred to Ginsburg’s opinion, which was shared by Justice Steven Breyer in Bond v. United States, on page 9 of his original brief.]

That was in Bond v. U.S. in 2011.  So that argument didn’t work.  So what they did was say, “You were supposed to put in a short argument as to why we should hear this case.” No:  the statute is explicit.  When you bring a RICO action, the defendants must answer every question with particularity.  They never answered any argument, because there is no argument. They tried to depend upon a technicality.

The Supreme Court said, “No, you can’t dump a case because you don’t agree with it on a technicality.”  He also said that they can’t hold a pro se petitioner to the same standard as an attorney.  So when they asked me to do it over, I was upset; I said, “No” and stood by my brief.

They also tried to cite a law which says that they can’t hear a case unless it’s a final decision for a district court.  I proved that the district court lied and didn’t follow the instructions, and I took the next laws which follow the one they cited and they were forced to say, “Yes, we have to hear it.”

They refused to hear the case but were forced to.

I addressed all of them.  I was allowed so many words to address the reply.  I had three defense teams I fought, not one: the attorney general’s office, which is loaded with lawyers; I fought the federal government, the Department of Justice attorney; and the private attorneys.  So I said, “OK, fine, all of them are going to put in briefs, so you’re telling me that I can answer each one separately.”  “Oh, no, you get to answer them all in one brief, and you’re limited to” whatever it was; I can’t remember exactly.

What was really interesting in this case is that this same judge, Judge Shipp, who eventually was removed from my case, had a case that followed based on the Second Amendment and ruled on everything in favor of the plaintiffs but ignored by case.  The plaintiff won the case.

This judge did everything to aid the State of New Jersey in my case.  What he did was so unorthodox that he had to remove himself.  Why?  Because he allowed them to continue arguing without jurisdiction.  He could actually be sued personally.  He had no jurisdiction to allow them to put in late briefs and do what they did:  not answer.  Rule 6 of the Federal Rules of Civil Procedure states that if they don’t answer in time, you can’t give them any space.  They didn’t even put in motions; they just did whatever they wanted.  So there was no proper due process during this entire case.

When I went to the Circuit Court, they fought everything, bu they couldn’t go against their own judges.  They just agreed with the lower court.

I went to the Supreme Court, and the defense wouldn’t even answer. They waived their right to answer in the Supreme Court, knowing that they might get the pool of liberal clerks who would say, “Don’t hear the case,” and no one would know about it.

But that wasn’t going to work.  It opened it up so that I had to write a special letter to all the judges and the court.  The judge that they put on this case in the District Court, which was meaningless because it was in the Circuit Court, Judge Brian Martinotti, I was supposed to answer within 30 days.  A year later, the judge wrote (paraphrased), “We’re dismissing this case with prejudice because Mr. Purpura did not answer within the time frame.”

It was a year old, he had no jurisdiction, he had no hearing, and he put false and misleading evidence into the court record…all so that they had something to hang their hat on to dismiss this.  You know what this is?  Dirty pool.

Please look for Part 2 of our interview with Mr. Purpura in the near future.