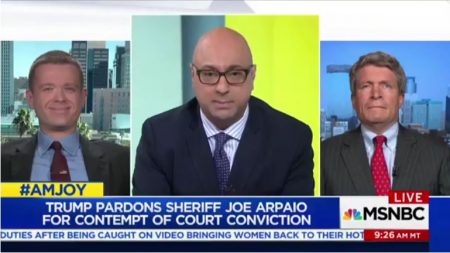 As stated at the beginning of the seven-minute video, Gallups is also host of the “Freedom Friday” radio show.

During the exchange with his two guests, one of whom was Arpaio defense attorney Jack Wilenchik, Velshi disclosed that he was born in Kenya, adding, apparently as a joke, that “Obama ‘wasn’t at any of the meetings'” (2:06).

Last Friday evening, Arpaio received a pardon from Donald Trump for a misdemeanor criminal contempt conviction stemming from a civil case filed in late 2007. The Justice Department’s prosecution of Arpaio on the charge was announced just before early voting began in October as Arpaio sought reelection to a seventh term as Maricopa County Sheriff.

Arpaio lost the election to Democrat Paul Penzone, who took office on January 1.

Before leaving office, Arpaio spoke at a press conference as to the findings of former detective Mike Zullo in his 5+-year investigation into the long-form birth certificate image posted on the White House website in April 2011.

At the request of 242 of his constituents, in August of that year, Arpaio commissioned Zullo, as head of the Maricopa County volunteer “Cold Case Posse,” to convene the group to determine whether or not claims made by experts that the birth certificate image was fraudulent were credible.

To his surprise, Zullo informed Arpaio several days later that the posse, which consisted of former law enforcement and legal professionals, could not clear the document as genuine.

A five-year investigation was then pursued by Zullo under Arpaio’s supervision, resulting in three press conferences held, respectively, on March 1, 2012; July 17, 2012; and December 15, 2016.

When speaking with Wilenchik, Velshi also misstated the date of a court order issued on December 23, 2011 as “2009” and the permanent injunction issued in December 2013 as “2011.”  Wilenchik corrected him on both counts as well as on a third point as to when the Obama regime rescinded Arpaio’s 287(g) certification.

Section 287(g) of the Immigration and Nationality Act (INA) allows for the deputizing of local law enforcement entities to apprehend illegal aliens following successful completion of a federal training program.  While the Obama regime de-emphasized the 287(g) program, the Trump administration has expanded it.

At virtually the same time as the judge’s 2011 order, the Maricopa County Sheriff’s Office (MCSO) was decertified from 287(g).

In the video, Gallups stressed that at no time during the hour-long December press conference did Arpaio claim that Barack Hussein Obama is a “Kenyan-born Muslim,” characterizing Velshi’s statement as “fake news.”

Gallups added that at a “four-hour” pre-conference meeting in Arpaio’s office which he attended, Arpaio “never” made that claim.

The video then provides an overview of the information released at the presser, including Zullo’s revelation that two “renowned” forensic analysts examined the birth certificate image and reached conclusions very similar to his own:  that the image is a “forgery and digitally-fabricated.”

Rather than showing curiosity about the findings of forgery announced at the first press conference more than five years ago, the mainstream media has ignored the investigation and attempted to marginalize anyone questioning Obama’s background and documentation as a “conspiracy theorist.”

Both Arpaio and Gallups, who is a former Florida deputy sheriff, have described the forgery of Obama’s purported birth certificate as a “national security” concern.

“With Arpaio’s pardon, there is a good chance that this will finally get the congressional investigation that it desperately needs,” Gallups said at 2:53, “and that is what the mainstream media is blowing their lids over.”