(Aug. 29, 2017) — A document dated August 21, 2017 filed in federal court alleging denial of access to the courts and a law library by Tennessee Department of Correction (TDOC) inmate and plaintiff Robert Z. Whipple, III asks that he be appointed an attorney, that the case be placed in abeyance until his release, and/or that an injunction be issued against prison officials.

Whipple currently resides in what is known as “the annex” at Bledsoe County Correctional Complex (BCCX) in Pikeville, TN, where he is serving time on a drug-related charge.  The case is one of three active federal lawsuits he has brought against the State of Tennessee, while a fourth, in which he alleged he was denied necessary medication while incarcerated, was dismissed.

In his latest filing in Whipple v. Millay, the plaintiff alleges that he “is unable to make copies to properly serve opposing counsel because prison officials read and censor his legal documents that he submits to be copied.”  A second allegation is that prison staff acted punitively by “seizing the computer” on which his legal documents were stored and that he has been prevented from visiting the prison law library containing federal case law essential to his pro se work.

Mirroring the accounts The Post & Email has received from other Tennessee inmates, Whipple alleges that prison staff have retaliated against him as a result of his legal actions, all of which have been filed at the federal level.  On page 2 of his newest brief, he stated that a “settlement” offer ostensibly accepted by the State of Tennessee was later reneged upon.

As The Post & Email has reported, Whipple’s TDOC registration indicates that he should have been eligible for parole in early 2014, an issue taken up in one of his three active cases.

On page 3, Whipple alleged that after receiving permission to access the federal law library located at Bledsoe’s “Site 2,” a “Lt. DeJong” informed him that “annex inmates can no longer go to the Site 2 law library,” as allegedly directed by Associate Warden Cobble.  “This directive is only being enforced as to Plaintiff. On July 31, 2017 and again on August 7, 2017, other annex inmates were permitted to access the Site 2 law library,” Whipple continued. “Plaintiff has requested logs through a Public Records Act request that will verify this and will provide them to the Court once TDOC produces the records.”

Whipple sought relief from the prison employees allegedly denying him access to the law library by means of an “Inmate Inquiry” submitted prior to his filing of the new brief.  In that inquiry, Whipple cited a U.S. Supreme Court opinion which, in Whipple’s words, “held that prison officials have an affirmative obligation to assist prisoners in accessing the courts–either by providing access to an adequate law library or by providing trained legal assistance.  See Bounds v. Smith.”

Bounds was argued to the high court in November 1976 and decided the following April.  A preface to the case at FindLaw reads:

The fundamental constitutional right of access to the courts held to require prison authorities to assist inmates in the preparation and filing of meaningful legal papers by providing prisoners with adequate law libraries or adequate assistance from persons trained in the law. Younger v. Gilmore, 404 U.S. 15 . Pp. 821-833.

A. It is now established beyond doubt that prisoners have a constitutional right of access to the courts. This Court recognized that right more than 35 years ago when it struck down a regulation prohibiting state prisoners from filing petitions for habeas corpus unless they were found “`properly [430 U.S. 817, 822]   drawn'” by the “`legal investigator'” for the parole board. Ex parte Hull, 312 U.S. 546 (1941). We held this violated the principle that “the state and its officers may not abridge or impair petitioner’s right to apply to a federal court for a writ of habeas corpus.” Id., at 549. See also Cochran v. Kansas, 316 U.S. 255 (1942).

More recent decisions have struck down restrictions and required remedial measures to insure that inmate access to the courts is adequate, effective, and meaningful. Thus, in order to prevent “effectively foreclosed access,” indigent prisoners must be allowed to file appeals and habeas corpus petitions without payment of docket fees. Burns v. Ohio, 360 U.S. 252, 257 (1959); Smith v. Bennett, 365 U.S. 708 (1961). Because we recognized that “adequate and effective appellate review” is impossible without a trial transcript or adequate substitute, we held that States must provide trial records to inmates unable to buy them. Griffin v. Illinois, 351 U.S. 12, 20 (1956). 8 Similarly, counsel must be appointed [430 U.S. 817, 823]   to give indigent inmates “a meaningful appeal” from their convictions. Douglas v. California, 372 U.S. 353, 358 (1963).

According to the federal electronic repository, PACER, Millay was initiated on September 3, 2014 under the category of “Prisoner Civil Rights” and alleging violations under 42 U.S.C. 1983.  In the upper right corner of the first electronic page is the notation in red type, “CASE-REOPENED,FILING-FEE-ASSESSED,NEWBERN,PRO-SE-CASE.”

Most of the defendants, including staff at TCIX, where Whipple was housed at the time; Tennessee Gov. Bill Haslam; and then-TDOC Commissioner Derrick Schofield, were “terminated” as a result of Senior Judge William J. Haynes, Jr.’s dismissal of the case in January.  Four defendants then remained.

As The Post & Email has reported over more than two years, complaints of interference with legal mail, particularly in sending documents to Tennessee courts, have been received from inmates from various prisons across the state.

Since May, a number of actions in Millay have taken place, including a dismissal of Whipple’s appeal to the Sixth Circuit Court of Appeals in July.

The most recent filing, pictured below, enclosed with a letter from Whipple received on Monday, was docketed by PACER on August 24.  It appears that handwritten changes Whipple indicated on page 9 after producing his final draft were incorporated into the document by court personnel. 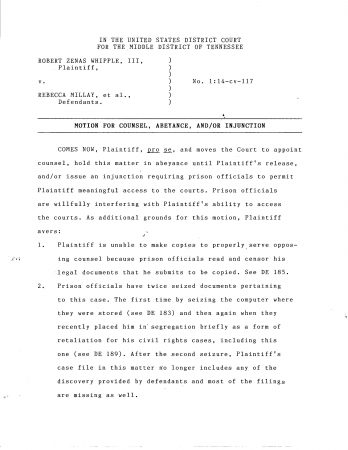 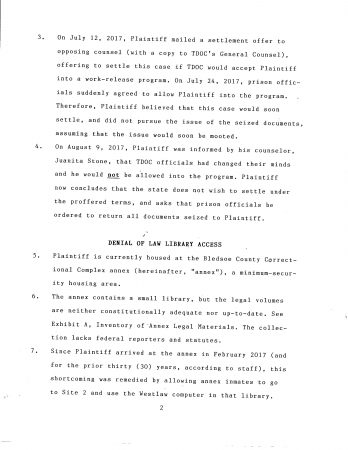 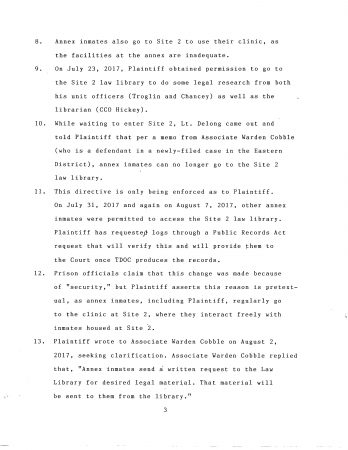 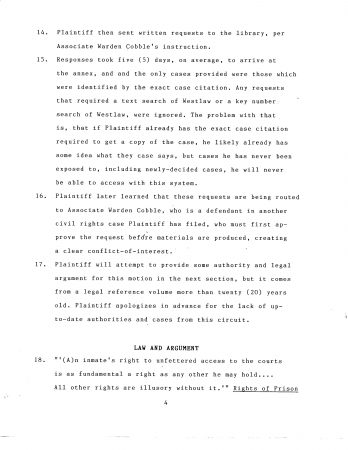 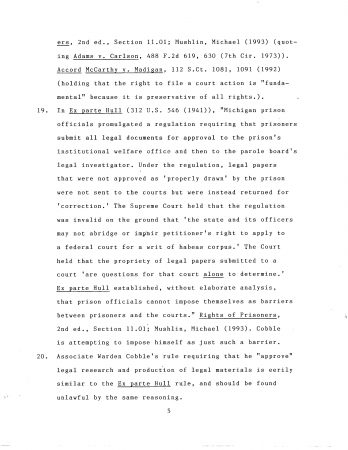 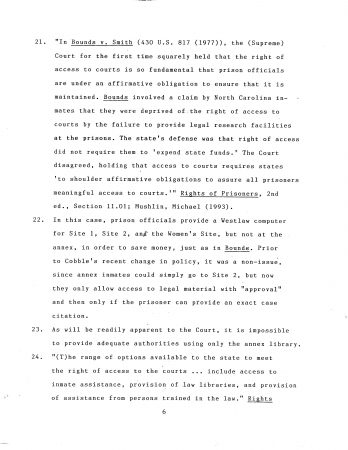 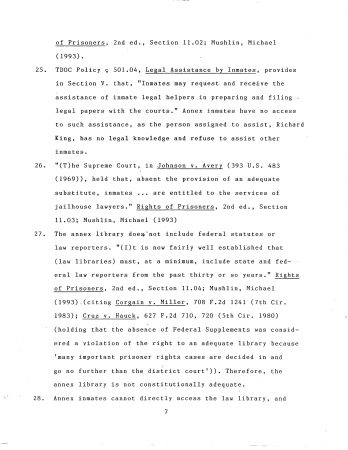 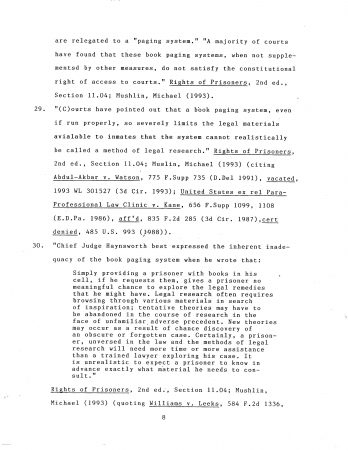 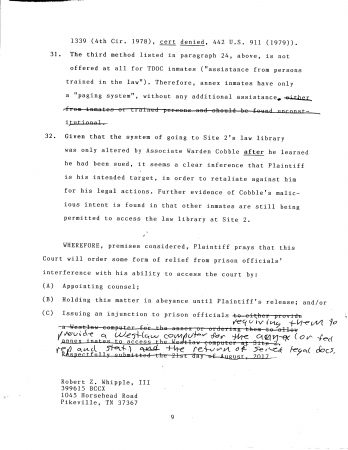 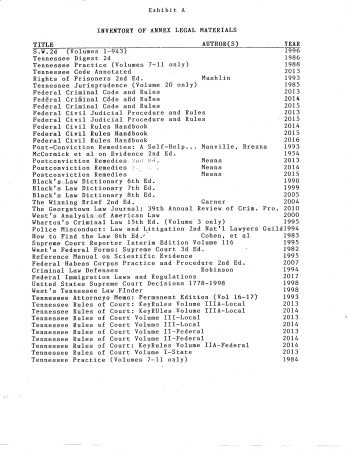 Nearly nine years ago, The Post & Email turned its attention to Tennessee’s criminal justice system after learning from LCDR Walter Francis Fitzpatrick, III (Ret) that county grand juries almost invariably contain a judicially-selected foreman chosen from outside of the jury pool.  While state law directs that no juror can serve twice within a 24-month period of time, the foreman, through judicial fiat, often serves continuously for years or decades.

Grand juries, mentioned only in the Fifth Amendment to the Bill of Rights in our founding documents, exist to affirm or reject the sufficiency of evidence presented by a government prosecutor alleging that a citizen or citizens have committed a crime.

One Response to "Are Tennessee Prison Officials Exempt from Federal Legal Precedent?"