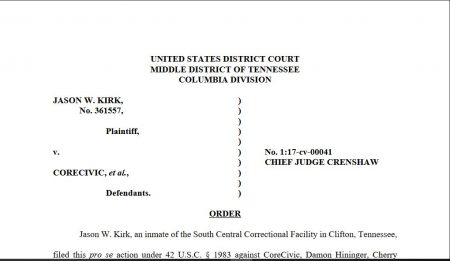 (Aug. 29, 2017) — A trial date has been set for a federal civil rights lawsuit filed in May against private prison operator CoreCivic, its CEO, and a number of its employees at the South Central Correctional Facility (SCCF) in Clifton, TN.

On May 25, U.S. District Court Judge Waverly D. Crenshaw, Jr. deemed two of the plaintiff’s claims to have met the threshold imposed by the Prison Litigation Reform Act (PLRA), allowing it to proceed.

In his order, Crenshaw ruled that plaintiff Jason W. Kirk, TDOC #361557, presented credible evidence that the defendants had shown themselves to be “deliberately indifferent to his risk of injury” (p. 5) and that his “allegations of retaliation withstand the required frivolity review” (p. 7).

Kirk’s request to proceed in forma pauperis was granted, which the judge explained signifies that he remains liable for the $350 filing fee but that it can be paid over time from his inmate trust account.

On Tuesday, a trial date was set for January 15, 2019 as entered on the federal PACER docket.

In a letter received last week, Kirk told us that the attorneys representing CoreCivic served him with discovery documents known as “interrogatories” and that “the court will soon be setting deadlines for discovery and for a trial date.”

Given that information, The Post & Email will be inquiring of the court if the 2019 date is a typographical error or if the trial is, in fact, scheduled nearly 17 months out.

The lawsuit is not Kirk’s first federal case. In May 2016, he filed an initial civil-rights lawsuit against Core Civic, 1:16-cv-00031, based on an alleged assault by gang members.

At the time, CoreCivic was known as “Corrections Corporation of America,” or “CCA.”

In early January, all except two defendants, Harville and Harrison, were removed from that case.

After granting both parties permission to file video evidence gathered from the “pod,” or prison section, where the incident allegedly occurred, on Monday Judge Joe Brown recommended dismissal “for failure to state a claim on which relief may be granted.”

In a footnote on page 3, Brown asserted that “plaintiff does not allege and show in either his original complaint or his amended complaint that, apart from not enforcing TDOC policies and procedures, that defendants Harville and Harrison violated his rights under the U.S. Constitution or laws of the United States.”

The recommendation to dismiss made to Crenshaw is summarized in the docket entry:

Over the last 16 months, The Post & Email has received a significant number of letters from inmates at another CoreCivic facility, TTCC, where gang activity is said to be rampant.  The claims appear to have been corroborated by a four-part series broadcast in June by WSMV in Nashville.

Inmate Safety on the Federal Docket added on Tuesday, August 29, 2017