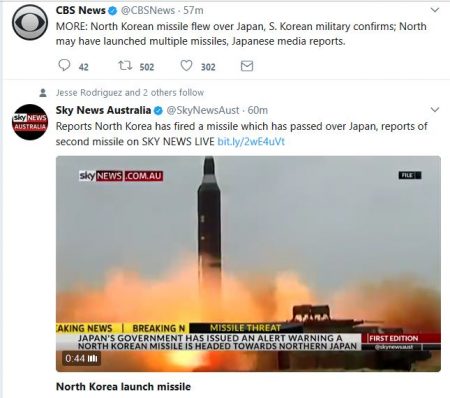 (Aug. 28, 2017) — As overseas news sources first reported, CNN Philippines reports that the Pentagon has confirmed that North Korea has launched a missile which sailed over northern Japan and disintegrated over the Pacific Ocean.

The Associated Press has described the missile as “ballistic.”

Since early this year, North Korea’s dictator, Kim Jong-Un, has threatened his neighbors, Europe and the U.S. with nuclear attacks and launched a number of missiles both successfully and unsuccessfully.

The communist nation is a pariah in the region and the world which is willing to allow its people to starve as it aggressively pursues its nuclear ambitions.

Several weeks ago, it was feared that Jong-Un’s threat against the United States would be realized when he put the U.S. territory of Guam in his crosshairs, indicating that he was contemplating launching an attack there in mid-August.  Tensions were somewhat diffused after President Donald Trump retorted that any attack on the U.S., its allies or any other country would be met with unprecedented “fire and fury.” At that point, Jong-Un appeared to back away from his menacing stance.

On Saturday, however, Pyongyang launched “three short-range ballistic missiles,” one of which reportedly failed just after takeoff.  The other two flew a distance of approximately 250 km, or about 155 miles, according to the U.S. military.

According to the UK Independent, Japanese Chief Cabinet Secretary Yoshihide Suga described the missile launch as “an unprecedented, serious and grave threat.”