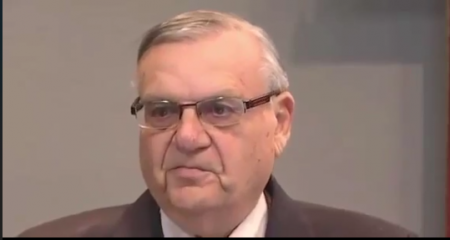 (Aug. 25, 2017) — At approximately 10:35 p.m. EDT, former Maricopa County Sheriff Joseph M. Arpaio was a guest on the “Hannity” show, where he expressed gratitude to President Donald Trump for pardoning him on a misdemeanor criminal conviction declared last month by a federal judge.

On his Twitter feed, Arpaio wrote that he is “humbled and incredibly grateful to President Trump. I look fwd to putting this chapter behind me and helping to #MAGA,” invoking Trump’s campaign and presidential slogan, “Make America Great Again.”

Arpaio could have faced up to six months in prison following the scheduled October 5 sentencing, which will no longer take place.

During the four-minute telephone interview, Arpaio indicated that he would release information on Monday or Tuesday associated with alleged judicial misconduct in his prosecution by the Justice Department.  In interviews earlier this week, Arpaio had suggested the same to Infowars host Alex Jones, Hannity and Fox Business Network host Neil Cavuto.

A politically-polarizing figure, Arpaio is admired and loved by his supporters and reviled by his enemies, the latter of whom roundly condemned the pardon on Friday night.  Some, including members of Congress, reminded their followers that Arpaio questioned Barack Hussein Obama’s “citizenship” along with Trump, using the pejorative “birthers.”

The politicians avoided referencing the five-year criminal investigation Arpaio commissioned to his “Cold Case Posse” which determined at an early point that the “long-form” birth certificate image posted on the White House website in 2011 is a “computer-generated forgery.”

The conviction held that Arpaio had willfully defied a federal judge’s order to cease dispatching county immigration patrols seeking to apprehend illegal aliens, while Arpaio’s attorneys had argued that the December 2011 order was unclear.  Earlier this year, three co-defendants were dismissed from the case, leaving the six-term, 85-year-old former sheriff and DEA agent as the sole defendant.

Arpaio’s legal team has argued that the DOJ applied the wrong statute in its prosecution of the case as well as deprivation of Arpaio’s constitutional rights.