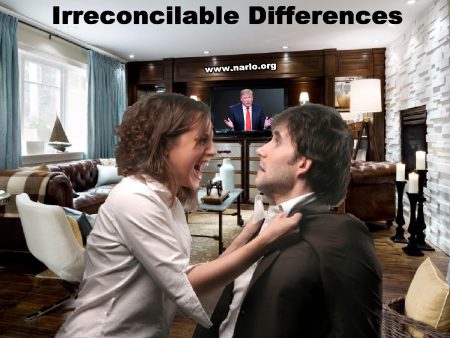 (Aug. 20, 2017) — What begins with the trappings of good will, respect and love, can often disintegrate into petty differences, resentment and rising anger.  What starts out as mutual common ground in the building of a marriage, or the foundation for a country, can unravel if the common ground or the foundation is disturbed, distorted, or loses its meaning and significance.  When the spirit of love, or the spirit of freedom, that binds two people or a nation together, is fractured by forces that tear it asunder, marriages and nations begin to crumble.  And so it is, as the divide between Americans grows wider, as the principles of our freedom are eroded by the actions of those who seek more power over the masses and those who seek to live off the sweat of others, America is beginning to come apart at the seams, as the resentment towards opposing views becomes even more acrimonious.

Resentment turns to heated discussions.  Discussions turn to arguments and arguments turn to shouting and shouting can lead to violence.  This is the path that many a man and woman take as their union, once blessed by God, is shattered by their differences over culture, money, religion, politics, abnormal behavior, cheating, abandonment and sex.  This is the path our nation is taking, as cracks open wider in the foundation of our liberty.

Sometimes, marriages can be saved with counseling, but that only occurs when there exists the utmost good faith of the parties who seek reconciliation.  If there is no good faith, the union dies.  And thus, the union of states, our cherished America, is about to die, if good faith is absent and if there is no attempt to return it to the principles of freedom, upon which it was founded.

We have descended into a nation immersed in an arena of squabbles, some petty, some major.  We squabble over who gets their piece of the Treasury first and how much.  We fight like heck to maintain “our share” and fight even harder to get more.  We fight with each other over race, religion and culture.  We squabble over going to war, even though foreign enemies camp outside our doors and send spies into our midst to kill us and severely damage our infrastructure and our economy, as happened on 9/11 and may happen with North Korea.  It will happen again, make no mistake.  It’s just a matter of time.  How prepared are we to defend against those attacks if we are divided as a people and as a nation?

For almost 100 years, we have let our government manipulate us while we looked the other way.  We have bought into the propaganda, hype, distortion and lies about the degree of compassion we owe to those less fortunate, with the degree decided by government and special interests.  We have bought into the fraud that is man-caused global warming.  We’ve almost succumbed to single-payer health care under ObamaCare that shows no signs that it can be fixed, repealed, or replaced.  Way too many of us scramble to get “our share” of Nationalized Health Care, for free, that our government has shoved down the throats of the taxpayer, in spite of massive opposition and in spite of absolutely no constitutional governing authority to do so.  In allowing government to “buy” us off for a few pieces of silver, the chains that come with those few pieces subject us to self-inflicted slavery.

A divided America now stands at the threshold of self-destruction from irreconcilable differences.  Primarily, those differences are in opposing ideologies and the apparent differences in what it means to be free.  Has America morphed into a Socialist Democracy and mob rule, or are we still the Constitutional Republic that was the design of our Founding Fathers?  That question is up for grabs.

As the opposing forces rise in amplitude and passion, the debates have turned to heated discussions, the discussions have turned to arguments, the arguments have turned to shouting and if something or someone doesn’t intervene between the opposing points of view, shouting will turn to violence, as it just did in Charlottesville, VA with the White Supremacists.  The voices on both sides are getting louder and louder.  Outrage and hate are replacing cool heads, logic, respect and objectivity.

But who will be the counselor that helps us back to reconciliation and the survival of the Union of States?  Who has the right words that will bring the two very different sides together?

America has a very difficult choice right now.  It can either succumb to the siren call of the party of socialism, or it can reclaim its freedom via the party of liberty.  In the realm of opposing views, one side is usually more right and one is usually more wrong, depending on the perspective one has on whether freedom is the right way, or the common good and the rights of the “collective” are the right way.  Are individual, unalienable rights, as granted to us by our creator and codified into the law of man under our Constitution, the path we should take, or should we repeal the Constitution and give more sway to the rights of the many as in a socialist society.   Millions of Americans, who have their hand out to government and most of those in government, believe the way of the collective is the right way?  If freedom is to be preserved, their way is the wrong way.

If amicable reconciliation is to occur, one side is going to have to back up more than the other side.  If those who seek freedom cannot convince those who seek the nanny state that they are wrong, our divorce is imminent.  If there are more people in the cart than there are those pulling the cart, the outcome is preordained.  Those pulling the cart will either quit or jump on the cart until the cart is just too heavy to pull.

Divorces are painful, ugly and expensive.  If both sides are intractable, history has shown that violence can be the only outcome.  If violence is to occur, the final outcome of a free America is totally unpredictable and left to the vagaries of random probabilities.  Every means must be brought to bear to assure that violence does not happen, because another American revolution may not be guided by providence as the first one may have been.

America is in the throes of a very painful divorce due to irreconcilable differences.  Only time will tell whether we can heal our differences or pay the horrendous price in outright civil war, as we were forced to do over 150 years ago.

If George Soros and his multiple socialist organizations prevail, if the news media continues to spout the socialist mantra and defends the Democrat Party, if Trump is brought down and the Republican Party disintegrates into bitter divisions, America has no chance.  If Trump, as flawed as he is, is impeached or rendered impotent by the Democrats reclaiming one or both chambers of Congress in 2018, you can kiss goodbye any hope of returning America to its roots as a Constitutional Republic for at least the next century, if ever.  The next year may be America’s last chance for a course correction, away from socialism and towards unalienable rights and individual freedom.

A free and sovereign America rests in the hands of those who will defend liberty at any cost.  A socialist America is all but assured if those who desire freedom sit on their hands and do nothing.

The question is, who will lead the charge?  Who has the message that will resonate with the masses and rally the troops?  But more important, how do we convince the other side that the path they travel always fails and leads to ruin, insolvency and slavery?  That is a tall order after over 100 years of the masses being indoctrinated in the Progressive ideology and now brainwashed into the cult of irrational, global environmentalism.

Let us know if you AGREE with our observations.

Is America In The Throes of a Nasty Divorce? added on Sunday, August 20, 2017

One Response to "Is America In The Throes of a Nasty Divorce?"