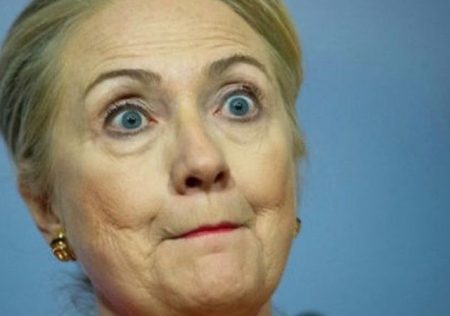 (Aug. 9, 2017) — New York Times bestselling author Ed Klein has produced a video via Newsmax and a column in which he exclusively reported that former Secretary of State Hillary Clinton is again the focus of a criminal investigation by the U.S. Department of Justice and may be offered a plea deal for admitting to “breaking the law.”

His article appeared on his website and at Newsmax on Tuesday and begins:

The Justice Department has reopened the investigation of Hillary Clinton’s mishandling of classified material on her private email system while she was secretary of state, and is considering offering her a plea bargain if she will agree to plead guilty to charges of breaking the law, according to a Clinton attorney.

In the video, Klein claimed that the idea of a plea bargain was floated in late July “and was offered by a high-ranking Justice Department official to the Clinton lawyer.”

Klein further included the infamous clip of Hillary Clinton asking, during her testimony to Congress on the September 11, 2012 American deaths in Benghazi, “What difference, at this point, does it make?” to which Klein responded, “…The Justice Department has re-examined the email case and believes there are ample grounds for prosecuting Hillary on a number of counts.”

On July 5, 2016, then-FBI Director James Comey announced at a press conference that neither the FBI nor the DOJ found reason to prosecute Clinton for her use of a private, unsecured email server while she was Obama’s secretary of state between 2009 and early 2013.  Although excoriating Clinton for handling classified information “extremely carelessly,” Comey contended that “no reasonable prosecutor would bring this case.”

As a result, Comey raised the ire of both the political left and right, with many in Congress urging then-White House occupant Barack Hussein Obama to fire him.

On May 9, Donald Trump terminated Comey while he was on a trip to Los Angeles. Since that time, Trump’s adversaries in Congress, which include both Republicans and Democrats, have shown sympathy for Comey and criticized Trump for his decision to fire him.

It is undisputed that although claiming to have turned over all of her emails to the FBI during its investigation while she sought the presidency, Clinton discarded approximately 33,000 emails, a point which Trump often raises on Twitter.

Several weeks ago, Trump expressed displeasure with Attorney General Jeff Sessions for apparently failing to pursue the evidence of wrongdoing against Clinton and possibly many of her colleagues and associates.  However, on Saturday he praised Sessions for Taking a strong public stand against leaks of classified and sensitive information to the media.

Klein’s report stated that the unnamed DOJ prosecutor could offer the plea-bargain to Clinton in exchange for his or her agreement not to investigate the Clinton Foundation, which has been accused of engaging in a “pay-to-play” scheme connected to Clinton’s tenure as Secretary of State.

The nonprofit, anti-government organization Judicial Watch has sued the State Department to obtain the remaining Clinton emails and reported that Clinton’s then-personal assistant, Huma Abedin, often granted favors to various individuals in exchange for their donations to the foundation.

During the presidential campaign, Trump would often stir up his audiences by promising to “Lock her up!” referring to Clinton.