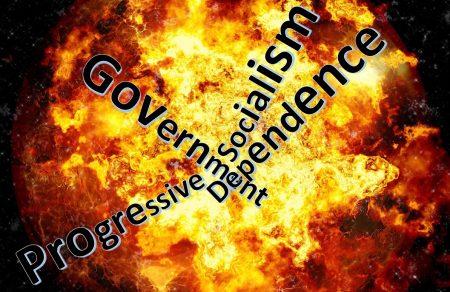 (Aug. 9, 2017) — Socialism’s barbs have sunk deep into the heart of America’s soul.  We see the Titanic struggle as Democrats and Republicans jointly hamper Trump’s attempts to return choices to the people. Washington will never willingly stop its progressive control, but we can make them.

As one who has studied the progressive/socialist movement from the Congressional halls to small communities across the country, I believe we have a rich opportunity to adapt an explosive method to defeat the anti-Constitutional forces in America.

Through speeches, seminars and videos we have exposed regionalists for grabbing local authority, sustainable development for driving up housing costs, and federal regulations for usurping local land use and zoning laws. Experts in education, climate science, and Constitutional law have bared how our federal agencies and court system are turning the land of the free into regions of the fettered.

Despite successes, every week reveals the incessant ‘tick-tock’ of the socialist advance.

In September 2016, the Minneapolis Public Housing Authority used taxpayers’ money to reduce the monthly rents to $75 for HUD residents who visited relatives overseas for up to 3 months.  The agency felt it was unfair that East Africans should have to save for so long to take an international trip most working Americans will never be able to afford.

In 2014, an affordable housing developer proposed building low-cost housing in a closed Whitehall Township, Pennsylvania warehouse.  When the voters and officials rejected the plan for zoning reasons, the developer contacted HUD who sued Whitehall.  By December 2016, Whitehall agreed to change their zoning laws, operate under a court-appointed monitor, and pay the developer $375,000 for costs including “out of pocket expenses.”

In a socialist society, the government defines ‘fair’ and votes become a minor nuisance.

The progressive movement in America has advanced so far that in 2016, the unelected Thrive Regional Partnership consisting of 16 counties in Tennessee, Georgia, and Alabama, urged their faked regional community to take “inspiration” from the works of Parag Khanna.  Khanna is a global strategist who preaches that nations must merge into connected regions overseen by direct technocracy.  He advocates that the American Democracy of our Founding Fathers (he apparently does not realize the U.S. is a Constitutional Republic,) is “crumbling” and must be replaced by a technocratic intelligentsia.

Khanna’s technocracy model recommends we eliminate the U.S. Senate and replace the President with a 7-member panel of elite, ivy-league educated experts who are better equipped to make decisions than squabbling elected officials and uninformed citizens.  The nation would consist of regions managed by unelected councils. Local community members would merely have an opportunity to offer input. (Think of a regional planning session where all opinions are welcome, but only those that meet the predetermined outcomes are accepted.)

Along with dozens of other regions, these groups and hundreds of existing Councils of Governments are salivating to turn Khanna’s’ direct technocracy into your future.

President Trump has thrown a monkey wrench into the left’s relentless drive toward a centrally-managed nation.  He has been immensely successful in reworking bad trade deals, opening industries for growth, and reducing costly federal regulations.  Perhaps his greatest accomplishment is the exposure of the vitriol and atrocities of the leftist establishment.

Still, Trump is not enough.

HUD’s 2015 Affirmatively Furthering Fair Housing rule handed the progressive movement a legal tool to bludgeon communities into central planning and assault the poor while masquerading as their rescuers.  AFFH represents the clearest threat to independence, property rights, and local autonomy in our history.

Yet, HUD’s recent resolution of the AFFH-based Westchester case and the confirmation of Dr. Carson as HUD Secretary have left the rule fully intact.

We must disconnect local communities from federal dependence because it is the lifeblood of socialism. Big government does not help the poor; it feeds on them.  Since 1965 the U.S. poverty rate has not wavered from between 11% and 15%, ever!  This, despite spending over $20 trillion.

The left needs the poor to be poor.  It is the only way they can garner the votes to remain office.  Imagine entering an election cycle knowing that 11%-15% of the people think they need you for they fear they will not eat.

It is not just poverty that propels socialism. The socialist movement eliminated Christianity in government and education because they know what our Founders knew. Only a moral society can be a free society.  Without a Christian moral foundation, America devolves into more offenses and violence, which leads to more elitists and tighter state control.

It is time to attack the heart of the progressive beast. The only way to kill the socialist movement is to free the poor, eliminate the demand for federal money and reinstate the church as the center of community life.

A growing society of independent, financially successful, Christian practicing, and capitalist African-Americans and Latinos is the equivalent of an Ebola outbreak inside the haughty progressive political community.

This much-abused base must be realigned with people who have no political axes and no concern other than to help them out of poverty and to share in freedom.

Community programs are already proving that low-income minorities will change their allegiances when they feel the benefits of new opportunities. That is why, in the spring of 2017, I started the Miss Mary Project.  We are a church-based program that teaches working-age members of low-income families in urban and suburban areas not just how to get a job, but how to excel on the job and become indispensable, promotable employees. Rather than help people rise to just above poverty, we help propel them to a lifetime of success, reducing the need for federal programs.

Our work is based on 30 years of corporate leadership training experience and builds on existing successful programs for the poor.  The Miss Mary Project has been so well-received that we are already opening publicly supported centers in Chattanooga, TN and Greenville, SC with plans to go nationwide.

We can defeat socialism, but not through reactionary and survivalist methods.  We must once again make the church the center of our community life and engage in and support positive local programs that truly help people become financially independent and free of government.

In January 2016, Mr. Anthony was a guest at the prestigious Rutgers University School of Management Fellowship Honoring Dr. Louis Kelso.  In February 2017, he was the keynote speaker on HUD and Property Rights at the Palmetto Panel at Clemson University and in August, the keynote speaker on HUD at the American Dream Coalition in Arlington VA.  Most recently John is the Founder and CEO of the Miss Mary Project.

How to Annihilate U.S. Socialism and Force Washington to Listen added on Wednesday, August 9, 2017