“EVIDENCE OF A CRIME” 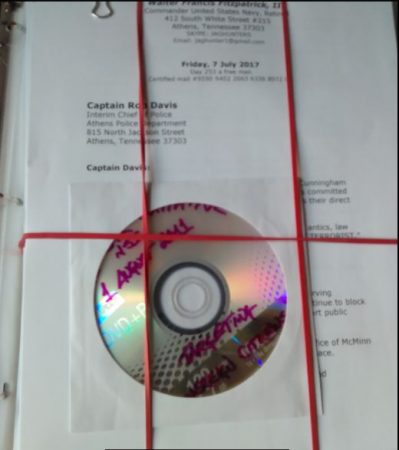 (Aug. 3, 2017) — The Post & Email has received a hard copy of a large document package which Walter Francis Fitzpatrick, III brought to the McMinn County, TN Justice Center on July 18, 2017 seeking an audience before the grand jury.

Tennessee law allows for any citizen to bring evidence of a crime committed in the community to the county grand jury. In order to apply to testify, the citizen must swear that the evidence he wishes to present to the grand jury is true and accurate to the best of his knowledge and belief under penalty of perjury.

Fitzpatrick asked to testify about government corruption and local law enforcement’s labeling of him as a “sovereign citizen” and “domestic terrorist” as depicted on a training DVD used by the McMinn County Sheriff’s Department (MCSD).  The training program was leaked to this publication in April 2012.

Fitzpatrick requested that the current grand jury foreman, Larry Wallace, recuse himself given that Wallace was named in his complaint.

In an interview on July 20, Fitzpatrick told The Post & Email that Wallace’s recusal proved that his 2014 indictment, arrest, trial and imprisonment were illegitimate and therefore criminal acts in and of themselves.

Fitzpatrick spent more than 26 months in state prison after making a request on March 18, 2014 to testify to the grand jury about local public corruption. At the time, then-grand jury foreman Jeffrey L. Cunningham refused to recuse himself from the matter even though Fitzpatrick made him aware that he was named in his complaint.

Cunningham, Wallace, and another former McMinn County grand jury foreman, Joe Riley, are all closely associated with the Athens Federal Community Bank, holding Board of Directors positions. Fitzpatrick has a theory as to why three successive grand jury foremen in McMinn County have been hand-selected by the judges and placed in that position.

On July 18, 2017, Fitzpatrick spoke briefly with Bowers and two other grand jurors comprising a three-member panel of the grand jury, which screens submissions from the public for possible referral to the full grand jury. Contradicting Donaghy’s later claim, Fitzpatrick said that he did not personally select the two women placed on the panel with Bowers.

Fitzpatrick requested that the three grand jurors copy and read his 400+-page submission containing synopses of U.S. Supreme Court decisions, articles from this publication, and other evidence which he said demonstrated that Tennessee is operating illicit grand juries because of the judges’ hand-picking of the foremen from outside of the jury pool. Also enclosed in the package was a copy of the training DVD which features him and others as “sovereign citizens.”

Fitzpatrick is certain that none of the documentation he left was reviewed. On Saturday, July 29, he received in the mail an order from Donaghy stating that the grand jury found that he was “not credible” and that the entire submission would be placed “under seal” with the court so as to “protect” him.

On page 2, Donaghy claimed that the panel “examined the documents.”  On the same page, Donaghy wrote that the panel’s conclusions, reportedly reached the same day on which Fitzpatrick made his visit, could be “harmful to the reputation of Mr. Fitzpatrick.”

The order misspelled Fitzpatrick’s middle name and redacted the names of the three grand jurors.

Donaghy included case law to support her contention that Fitzpatrick is disallowed from returning to the grand jury on the same issue.

On Thursday, Fitzpatrick told us:

The legislative history of how we got to this point with the grand juries, two police reports, the DVD, reports I sent to federal officials, and six court cases were in there.  So the questions becomes, “What’s not credible?”

Not one of those agencies and the police department here has come back to tell me that they are not credible.  These are sworn statements.

The material in the binder measures one and three-quarter inches, plus the disk.  This is evidence of a crime that Jeff Cunningham committed against me.  He said that he was acting legally, but he was not.  He said he was blocking me but that it was OK for him to do that.  Cunningham declared my activities in January, February, and March 2014 as criminal. Then he saw to it I was kidnapped and unlawfully incarcerated.  My activities on 18 July 2017 were identical to those carried out in 2014, but as of this writing, not declared as criminal.

You now have the demonstration from my being in the room with them on the 18th that Cunningham’s accusations against me are false.

Donaghy has now attempted to seal those records.  It’s of no consequence.  It didn’t take them long to put together whatever they gave to the judge.  That group is not capable of making a determination about whether the information I gave them was or was not credible.

Donaghy, in signing out her order to block me from returning to the McMinn County grand jury, seeks to protect herself from being named to the grand jury in crimes Donaghy commits.

6 Responses to "Fitzpatrick: Judge Donaghy Seals Evidence to “Protect Herself”"