(Jul. 5, 2017) — In a late-breaking development just before midnight on Tuesday, the hashtag “#CNNBlackmail” began trending on Twitter in response to CNN’s own report that it had sought out, identified and contacted the creator of a parody in which an image of the president appears to wrestle to the floor an unidentified CNN reporter on the floor surrounding a wrestling ring.

The “CNN reporter” has his face obscured by the CNN logo throughout the short video, which reportedly was created from a motionless graphic produced in “GIF,” or “Graphics Interchange Format.”

The article was written by CNN’s Andrew Kaczynski, formerly of Buzzfeed News, for a series entitled “KFILE,” entitled, “How CNN found the Reddit user behind the Trump wrestling GIF.”

In the article and on Twitter, Kaczynski explains how the cable news outlet located the creator of the graphic which was morphed by an unknown party or parties into the short video clip which President Donald Trump read tweeted on Sunday, igniting another media uproar just before the Independence Day holiday.

CNN reported that the graphic-creator “apologized” and “expressed remorse in an interview with CNN for other posts he made that were racist and anti-Semitic.”

In this newest development, CNN has been accused by many observers and some in the media of committing “blackmail” against the private citizen, whose reported “apology” reads, in part:

The meme was created purely as satire, it was not meant to be a call to violence against CNN or any other news affiliation. I had no idea anyone would take it and put sound to it and then have it put up on the President’s Twitter feed. It was a prank, nothing more. What the President’s feed showed was not the original post that was posted here, but loaded up somewhere else and sound added to it then sent out on Twitter. I thought it was the original post that was made and that is why I took credit for it. I have the highest respect for the journalist community and they put their lives on the line every day with the jobs that they do in reporting the news.

The image-creator was reportedly a member of the Reddit community known as “The Donald,” an online forum highly supportive of the 45th president.

CNN claims that the Reddit user made “anti-Semitic” and other “offensive” remarks on his Reddit feed without providing examples and which have since reportedly been removed from the message board.

Reddit users on Wednesday appeared to be fighting back against what they see as CNN’s bullying of the member, and the video clip in question remains available there, as CNN noted.

Contrary to some reports, Kaczynski stated on Twitter that the graphic-creator is “a middle-aged man” and not a 15-year-old.

Following Trump’s circulation of the video clip, CNN contributors and commentators expressed indignation and shock, claiming that Trump was promoting violence against journalists.

Trump had not commented on the video since Sunday until Wednesday morning when he tweeted, in response to a tweet from Project Veritas‘s James O’Keefe, “Trust me, they’re trying to look worse than possible! #CNNBlackmail”. 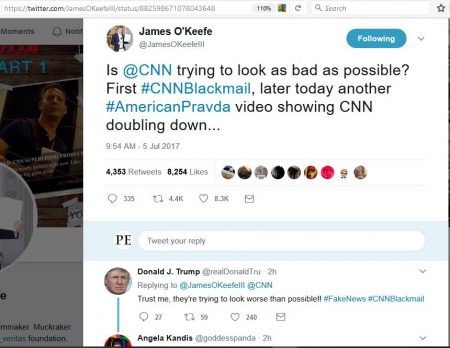 On Tuesday night, after Independence Day revelers and vacationers returned to the internet, some Twitter users vowed to produce “memes” which would further irritate CNN employees.

Many, including a congressman, wondered if CNN had “crossed a line” in seeking out and contacting the creator of an image which CNN found distasteful to its brand. 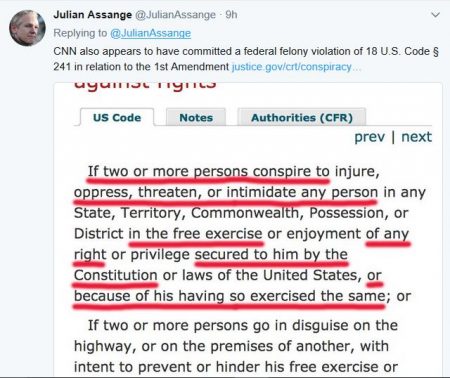 If two or more persons conspire to injure, oppress, threaten, or intimidate any person in any State, Territory, Commonwealth, Possession, or District in the free exercise or enjoyment of any right or privilege secured to him by the Constitution or laws of the United States, or because of his having so exercised the same; or

If two or more persons go in disguise on the highway, or on the premises of another, with intent to prevent or hinder his free exercise or enjoyment of any right or privilege so secured—

Project Veritas‘s James O’Keefe tweeted, promising a fourth video in his series exposing CNN as having admitted that claims of “Russia collusion” relating to Trump and his former campaign associates are as yet unsubstantiated.

As of 11:15 a.m. EDT, “The Donald” Reddit community placed at the top of its message board O’Keefe’s announcement and an apparent campaign to convince CNN’s advertisers to withdraw their support of the news channel.

Tweets under #CNNBlackmail continue to pour in by the hundreds on Wednesday.

In his article, Kaczynski pledged to withhold the identity of the Reddit graphic-creator given his reported apology and “because he said he is not going to repeat this ugly behavior on social media again,” but added, “CNN reserves the right to publish his identity should any of that change. 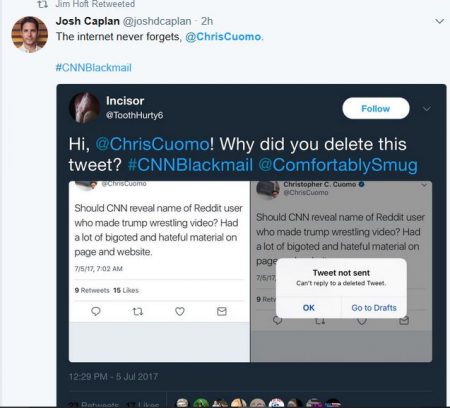 While that tweet was reportedly removed, Cuomo additionally tweeted at approximately 9:45 a.m. EDT on Wednesday: 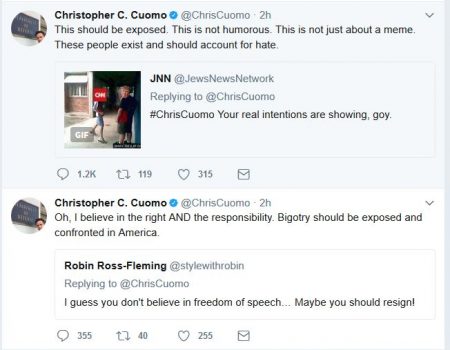