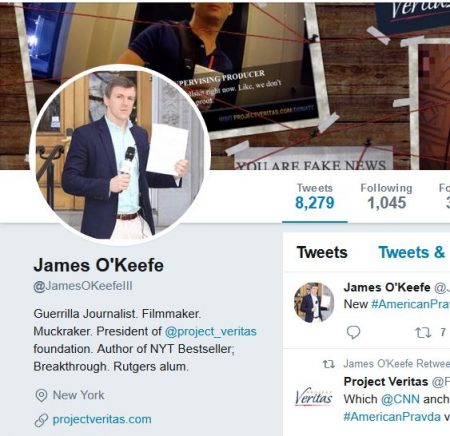 (Jul. 5, 2017) — James O’Keefe, president of Project Veritas, tweeted at approximately 1:37 PM EDT on Wednesday that the fourth in a series of videos focusing on CNN’s questionable reportage of events surrounding the Trump White House will be out within minutes.

O’Keefe’s organization has exposed alleged voter fraud in New Hampshire as well as proven intent to commit voter-registration fraud in 2008 on the part of the now-defunct ACORN, which was government-funded.

He has echoed President Donald Trump’s views on CNN’s reporting as “fake news.”

As this story went to press, O’Keefe released a prelude to the new video apparently focusing on CNN associate producer Jimmy Carr, who was featured in the third of last week’s videos. As of press time, this writer can access the Twitter version but not the YouTube video.

Carr is associate producer of CNN’s “New Day,” a program which on Wednesday morning celebrated the “tracking down” of a Reddit user and creator of a “GIF” which the “news” channel found objectionable.

Beginning on Tuesday night as the story of the “creator” went viral, questions were raised about the behavior and tactics of CNN personnel based on their own statements which belie any objectivity a news company is expected to have when reporting on government and politics.