How Long Can a Hunger Strike Last? 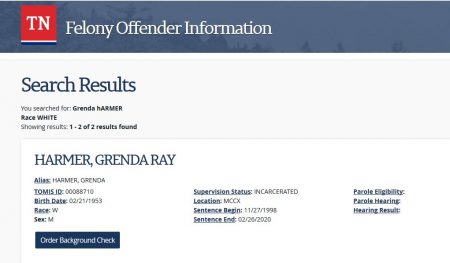 (Jun. 26, 2017) — After more than two weeks, on Monday The Post & Email received a letter from Tennessee inmate Grenda Harmer, #88710, who began a hunger strike on June 5 at the Morgan County Correctional Complex (MCCX).

Harmer’s situation was discussed on the Nooganomics radio show on Friday morning as part of the larger problem of Tennessee’s prison conditions, including those run by private operator CoreCivic.

His protest is to treatment he said he received by MCCX intake officers after he was transferred there on June 3 from a CoreCivic institution, South Central Correctional Facility (SCCF).  Harmer has been housed in four facilities in less than a year’s time as noted in a letter from the No Exceptions Prison Collective (NEPC) to MCCX Warden Shawn Phillips on June 14.

In the letter received today, dated June 19, 2017, Harmer indicated that he is drinking milk packaged for institutional use and has eaten a banana as an “olive branch” to corrections staff. “They refused to accept olive branch,” he reported.

A narrative of events comprises pages 1 and 2, which are written on a small piece of paper, while two subsequent 8.5″ x 11″ sheets, also containing writing on both sides, document specific observations in linear and diary formats.

The page with journal entries for each day begins with June 9 and ends with June 18.

In a June 8 letter informing us of the hunger strike, Harmer stated that he feared his food would be poisoned based on a “threat” he said staff made during the intake process, after which he was placed in “high security” without being told why.

Harmer said that upon his arrival at the facility, inmates were allowed access to his institutional file, which violates Tennessee Department of Correction (TDOC) policy.  He also reported that his television and desert boots were confiscated and that guards threatened to dispose of them.

The TDOC’s Administrative Policies and Procedures manual governing inmate property state that a television is allowable outside of the space restriction for personal property of “six cubic feet.”

On page 1, Harmer contended that “The medical staff are horrible.” 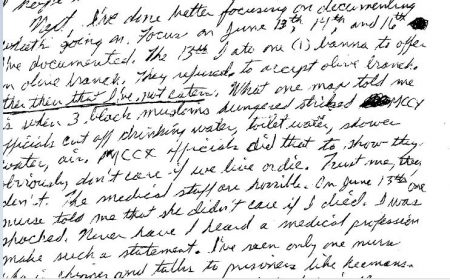 The section of TDOC policies titled “Inmate Personal Property Accounting System” states that an inmate’s property is moved with him between institutions and “shall be checked at the receiving institution” by means of a computerized system to discover if any item is missing.

On page 2 of the letter, Harmer stated that on June 16, he was “threatened with going to the TRIANGLE” following staff’s decision to place him in segregation for 30 days.  “I doubt I’ll last long in the Triangle, being the only person who is not a gang member,” he wrote.  “When my 30 days are up it appears that is where I’m heading. Whether, I’m able to walk or not.” [sic]

Harmer titled page 3 of his letter “FACTS ABOUT MCCX HIGH SECURITY (“HS”), and indicated his section and number as “25D.”  The first item in a list is “MEDICAL ISSUES INVOLVING HUNGER STRIKES” and begins:

If I remember correctly TDOC has a policy involving hunger strikes by prisoners.  That it requires each facility to have medical monitor said prisoner(s) when it becomes apparent the prisoner has engaged in a hunger strike. I could be wrong.  I might be thinking of something I read in the PLN or a newspaper…”

In item #2 on the page, “MCCX HS 25D area,” Harmer stated that “I’ve never been permitted outside my cell since June 5th.” 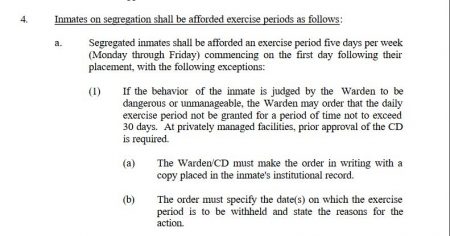 Harmer described other conditions he is experiencing on subsequent pages: 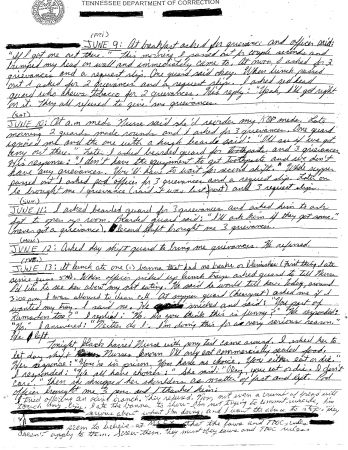 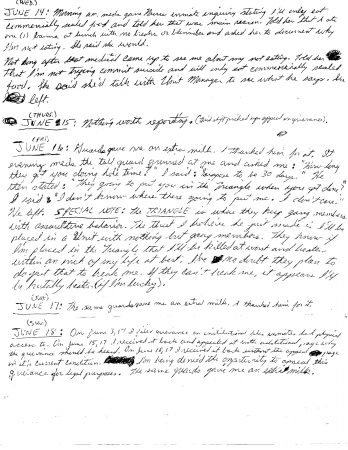 On the back of one of the full-sized sheets of paper, Harmer remarked, “Oh!  It should be noted I’m the only prisoner who is denied footwear.” 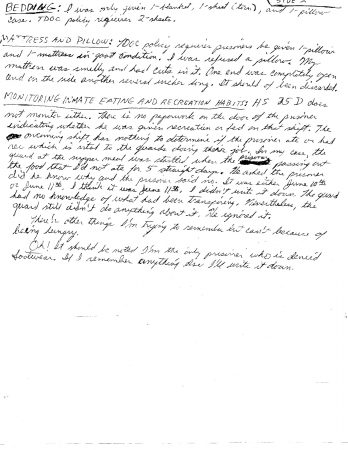 Enclosed with the letter were copies of two grievances.  In one, Harmer directed himself to “MEDICAL STAFF” in which he wrote, “I’m very weak and would like to eat.” 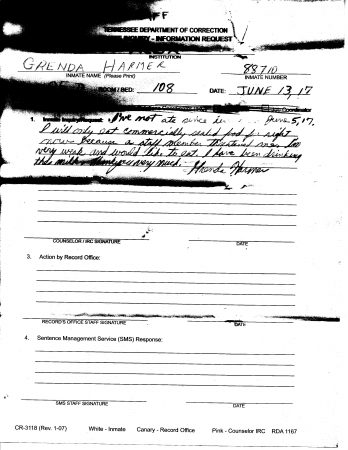 The other was a request for four grievance forms. 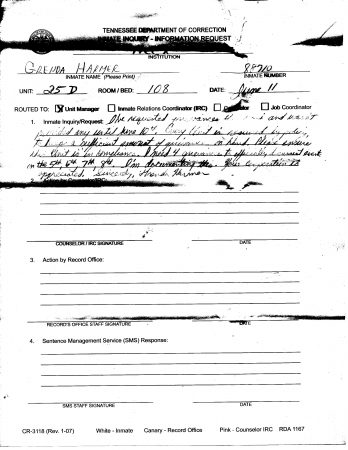