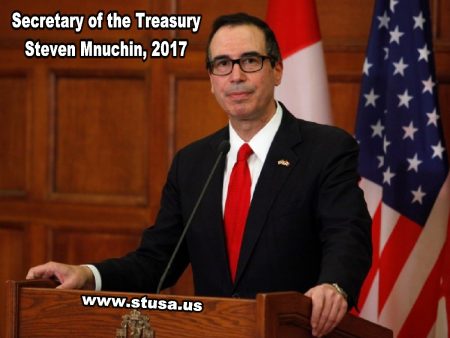 (Jun. 25, 2017) — NOTE:  The reader may wonder why we continue to focus on the IRS.  The following open letter to Treasury Secretary Mnuchin provides a detailed explanation.  Due to a total and frustrating lack of interest, we have abandoned our attempts to work towards abolishing the IRS.  We have decided instead to help people fight the IRS with powerful tools that we have successfully used to defeat them.  (See the last paragraph.)

We are in receipt of a recent letter from the IRS regarding our taxes for Calendar-Year 2017, wherein your IRS agent, one Rodney D. Lewis of the Kansas City, MO IRS office, says we owe just shy of $1,000 for 2017.  We find that quite interesting in that the taxes for Calendar-Year 2017 would not be due to be reported and paid until April 15, 2018, eleven months from now.  We responded in writing to IRS Agent Lewis, stating that there was no way we could owe taxes for said uncompleted calendar year and admonished him for his gross negligence and stupidity and accused him of intentional harassment.  We also asked for a sincere apology.  We doubt seriously if we will ever hear from Agent Lewis again, since the IRS hardly ever responds to our lawful communications.

We further stated to Agent Lewis that: The IRS is grossly incompetent and frankly, we grow weary and irritated by the constant barrage of 45-day, 60-day and 90-day letters from the IRS, from multiple IRS Offices, that are never answered and letters stating that taxes are due when they are not due.  As a testament to that incompetence, a few months ago we received an IRS Demand Notice for over $12,000 that the IRS says we owe for Calendar-Year 2015, except that the Demand Notice was addressed to a person in California, not us.  Nevertheless, the IRS letter said we owed it.  It is a criminal act for the IRS to send us a Notice for another taxpayer, containing their name, address and social security number.  If we were dishonest we could use that information for unlawful purposes.  In fact, the IRS Agent that sent that Demand Notice to us, violated 26 USC Section 6103 for releasing confidential taxpayer information to an unauthorized third party.  Such a violation of Section 6103 is a felony and is punishable by a fine up to $5,000 and imprisonment of not more than five (5) years, or both.  (26 USC Section 7213)  Will this IRS Agent be punished for her crime …..  probably not?  But if we did it, we could end up in jail.

Yesterday, we received a letter from IRS Austin, TX.  They stated that they received our letter of March 29, 2017 and had forwarded it to IRS Ogden for disposition.  (We have never written to IRS Austin.  How they received our March 29th correspondence is a mystery.)  One day later we received another letter from IRS Austin where they said they had received our letter of March 29th but needed another 60 days to do research before they responded.  The subject matter of both letters was the same, but the responses were diametrically opposed to each other.   That’s nuts!

We have also received a demand for payment from the IRS for an amount that had already been collected.  That’s fraud!

In addition to the IRS harassment we have described above, we have a claim filed with the Secretary of the Treasury for over $10,000 that was illegally seized from us by the IRS.  Our legal arguments for such illegal seizure are unimpeachable.  Being that the IRS never gives up any money it has seized illegally, we’ll probably never see a dime of it, or the IRS will force us to go to court to collect it.

And these are just a few examples of the BS, we and millions of other Americans are forced to endure at the hands of the IRS.  This is insane Secretary Mnuchin.  Lawful Americans shouldn’t have to put up with this cr**.

Yes, we have defeated the IRS at least five times but at great time and expense on our part.  Unfortunately, that any American would receive letters from the IRS requesting taxes for a year that has not even ended yet, or for another person, or for an IRS mistake, is not news.  It happens every day by the tens of thousands of events.  The tax amounts demanded can be significant, but the millions of mistakes represent just how inept and corrupt the IRS has become.  That such intimidating mistaken letters are sent to free, sovereign American citizens in the first place is a testament to the collapse of Constitutional liberties.

The American tax code of over 73,000 of pages and tens of thousands of rules and regulations is an abomination and only a tyrannical government could come up with such a system.  It is not only designed to intimidate, harass and entrap the taxpayer, it is designed to enslave the taxpayer as well.

Intimidation and entrapment come in the form of the complicated, complex and often-conflicting tax regulations and forms that the IRS changes every year, while expecting the average American taxpayer to accurately comply.  Harassment comes in the form of a barrage of letters demanding something, or accusing the taxpayer of some nebulous violation of the tax code and threatening seizure of private assets when no violations occurred.  Enslavement comes in the form of forcing the taxpayer to consult high-paid tax experts to fill out the da** forms, or face penalties, fines and even imprisonment if they don’t get it right.  And what is even worse, if you ask three IRS agents a tax question, you will get three different answers and it is quite possible that all three IRS answers will be wrong.

You, or any other IRS agent, tax preparer, accountant, CPA, or tax attorney, much less the IRS Commissioner, cannot provide the answer to one simple question:

The tax code is a shameless, unconstitutional, racketeering tax scheme perpetrated on the American people by the U. S. Government, to manipulate the masses for social and environmental engineering and to re-distribute the wealth of this country.  It represents government’s insidious, never-ending, unconstitutional attempts to buy votes from the less fortunate among us, or protected classes, on the backs of the producers and achievers in America.  It has nothing to do with fairness or equity.  The taxing system is all about POWER, CONTROL and the BUYING OF VOTES to remain in perpetual power, as the Democrats have done for the last 100 years!  2016 and Trump are an anomaly and will be undone by the Democrats and the Deep State.  It was the Democrats that gave us the 16th Amendment, the Federal Reserve and the IRS and they cheated to get it ratified.

You have the American people exactly where you want them; scared, compliant, obedient and shivering and trembling like little puppies.  We can attest to this by the fact that the response to our attempts to abolish the IRS with a new website fell on deaf ears, in a nation where the average citizen lives in abject fear of the IRS.

But please understand, you can only squeeze a tomato so hard, before it suddenly squishes out between your fingers.  This admonition is not to be construed as a threat to you personally, or the government in general.  It is only a prediction of things to come in America if the government continues on the path it now treads.  Millions of Americans still actually believe in freedom and liberty and the pursuit of happiness, without government interference and we reject enslavement of any kind, even tax code enslavement.

It is very unlikely that you care?  But then why should you?  The previous Secretary of the Treasury, Jack Lew, manipulated the tax law so that he would owe no taxes after receiving huge salaries and bonuses.  Former Senator Tom Daschle didn’t pay his taxes and get caught when he was nominated for HUD secretary and had to withdraw his name.  It has been reported that tens of thousands of federal employees, including IRS employees, owe as much as $3.5 Billion in back taxes to the IRS and are given a pass, while the IRS’s foot is on the throats of lawful Americans demanding absolute compliance ….. or else!  The IRS loses billions to fraud every year that it never catches.  That’s our money you are wasting Treasury Secretary Mnuchin and the buck stops on your desk.  Why haven’t you stopped it?

Good God, where’s the outrage?  One hundred years ago this tyrannical overreach by government would have caused a revolution.

The government and the IRS are hopelessly out of control and you and your predecessors are co-conspirators.  The IRS tax code, which you oversee, is just another chain around the necks of once-free Americans who now must capitulate to the ever-tightening noose of dictatorial control by a corrupt government with an insatiable appetite for our money.

But then I doubt seriously if you will ever see this letter.  You must have more important things to do than responding to a disgruntled taxpayer, you know, like writing more tax code, or bailing out your friends at Goldman Sachs, or the Federal Reserve, or covering up for your corrupt friends in the government.

What a poor excuse for a free nation America has become.  We might just as well be another banana republic, run by an anachronism of an elite, rich-old-men, oligarchy.  You are but an integral, willing partner in that oligarchy.  It means nothing that you are a Republican.

ARE YOU HAVING TROUBLE WITH THE IRS?

Is the reader of this article having trouble with the IRS, similar to what we have described in this letter to Secretary Mnuchin?  Perhaps you should see how we have defeated the IRS on numerous occasions with effective documents we created HERE.

One Response to "An Open Letter To Treasury Secretary Steven Mnuchin"