“WHAT WAS THE DNC HIDING?” 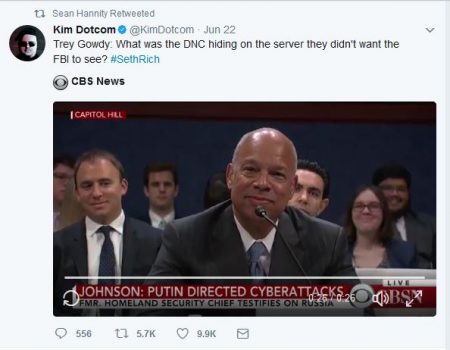 (Jun. 24, 2017) — Following testimony given by former DHS Secretary Jeh Johnson on Wednesday in response to questioning by House Intelligence Committee member Rep. Trey Gowdy about Russian interference in last year’s elections, internet entrepreneur Kim Dotcom asked a question of his own on Twitter.

Gowdy had asked Johnson why the Democratic National Committee (DNC) did not turn over its servers to the FBI for inspection after the FBI had warned of a high probability of hackers exploiting them prior to the 2016 presidential election.

Johnson did not proffer an answer as to why the DNC might have declined government help in preventing any intrusions.

Over the last several months, both House and Senate committees have grilled Obama-era and current public servants, including some from the intelligence community, as to what they knew or suspected of alleged Russian “hacking” of U.S. elections systems prior to the general election of November 8.

On June 8, former FBI Director James Comey testified that there was “no doubt” that the Russian government interfered in last year’s election, an assertion with which Johnson agreed on Wednesday.  However, current and former officials who have testified also appear to concur that no vote counts were altered as a result of the reported Russian interference.  Additionally, none has to date supported independently the allegation that President Donald Trump and/or any of his campaign associates “colluded” with the Russians to affect the outcome of the election, as some Democrats have suggested.

The video of Gowdy’s exchange with Johnson which Dotcom included in his tweet is posted at Gateway Pundit.  “If they had turned the server over to you or Director Comey, maybe you would have known more and maybe there would have more for you to report,” Gowdy had said to Johnson, to which Johnson responded, “I’m not going to argue with you, sir.  That was a leading question, and I’ll agree to be led…”

“Why would they say no?  Why would they not want to cooperate with that investigation?” FNC anchor Martha MacCallum later asked Gowdy, a former prosecutor, of the DNC.  Gowdy responded, “Let me hazard a wild guess: that there may be something else on that server they didn’t want law enforcement to see.  That’s where you start.  I don’t like speculating, but I have dealt in the past with victims who would not cooperate with investigations, and typically, the reason is there’s something else you don’t want law enforcement to see.”

After the election, the U.S. intelligence community stated that it was “confident that the Russian Government directed the recent compromises of e-mails from US persons and institutions, including from US political organizations.”  The alleged Russian breaches reportedly yielded the DNC’s opposition research on Trump.

Over the last several days, following Gowdy’s questioning of Johnson, Trump has asked why, if the Obama regime knew that the Russians were penetrating U.S. election systems months before any votes were cast, more was not done to protect system vulnerabilities at that time.

In his tweet on Thursday, Dotcom directed a question to Gowdy using Gowdy’s own rationale:

What was the DNC hiding on the server they didn’t want the FBI to see?

Dotcom’s query was followed by “#Seth Rich,” a reference to a 27-year-old DNC staffer who was fatally shot near his home in Washington, DC on July 10 of last year which the DC Metropolitan Police Department has termed a “botched robbery attempt.”

Rich’s killer or killers have not yet been brought to justice amid allegations that for political reasons, the investigation is not being aggressively pursued.

On May 20, Dotcom tweeted that he knew for a fact that Rich was involved in exposing thousands of emails from the DNC servers by first providing them to the open-government organization Wikileaks founded by Julian Assange more than a decade ago.

The internet entrepreneur and alleged former hacker followed up that claim with a statement on his website which begins, “#SethRich was a hero.  I know that Seth Rich was involved in the DNC leak…I have consulted with my lawyers. I accept that my full statement should be provided to the authorities and I am prepared to do that so that there can be a full investigation. My lawyers will speak with the authorities regarding the proper process.”

Dotcom has indicated that he has been a financial supporter of WikiLeaks in the past.  His May 20 claim gained the attention of FNC host Sean Hannity, who afterward began reporting on the Rich case.  As if in lockstep, the mainstream media worked intently to convince its audiences that the claim that Rich was a WikiLeaks source was “an unfounded conspiracy theory,” often without mentioning Dotcom’s assertion or seeking to interview him.

As The Post & Email has reported, much attention has been devoted to attempting to convince the public that Rich’s alleged communications with WikiLeaks amount to a “debunked” theory.

Although the media and pressure from Rich’s parents succeeded last month in silencing Hannity on his FNC show at least temporarily, Hannity indicated that he would continue his investigation into who killed Rich.  He also retweeted Dotcom’s tweet posing the question to Gowdy.

Various media outlets rejoiced after FNC removed an article from its website which had provided the basis for the theory that Rich supplied the DNC emails and attachments to WikiLeaks, but the original source of the information, a local Fox affiliate in Washington, DC, has stood by its story with a clarification despite threats of legal action and claims that it contains false information.

In early January, Hannity flew to London, where Assange has lived for nearly five years to avoid possible extradition to the U.S. for releasing classified documents, to conduct a wide-ranging interview of the WikiLeaks founder.  On Saturday evening, Hannity tweeted of Assange:

Meanwhile, on Saturday evening, Dotcom reported on Twitter that a case brought against him by the U.S. Justice Department in 2012 which shut down his cloud-storage service known as Megaupload and placed him under house arrest “is taking a big turn in July. All warrants in my case are nullities. Raid, arrest, search, asset seizures, all UNLAWFUL.”

After making his May 20 claim, Dotcom’s attorneys sent a letter to Special Counsel Robert Mueller offering to make their client available to provide relevant testimony in Mueller’s probe of Russian influence on the U.S. election.