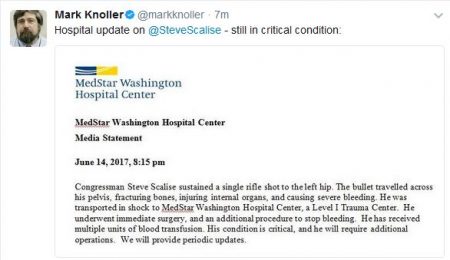 (Jun. 14, 2017) — At 9:25 p.m. EDT, Fox News’s “The Five” co-host Kimberly Guilfoyle announced an update received on her phone on Rep. Steve Scalise (R-LA1), who was seriously injured during baseball practice on Wednesday morning by a 66-year-old shooter apparently targeting Republicans.

The practice session was preparation for an annual charity game between Democrats and Republicans scheduled for Thursday which reportedly will take place as planned despite today’s tragedy.

The shooter, James T. Hodgkinson of Illinois, is dead.

Because of Scalise’s rank in the House of Representatives, he was accompanied by a security detail from the U.S. Capitol Police whose two individuals are widely credited for saving lives following Hodgkinson’s rampage, which began just after 7:00 a.m.  It has been widely reported that both officers responded quickly to the gunfire despite having been wounded themselves.

Congressmen participating in the practice who later went on camera unanimously expressed the sentiment that had the Capitol Police not been present, there would have been “a massacre” as a result of the approximately 50 shots Hodgkinson fired from a rifle.

The horrific occurrence caused House Republican and Democrat leaders to come together in rare solidarity and a call for unity.

The FBI has taken over the investigation from the Capitol Police and assisting local authorities.

At about the same time as Guilfoyle’s pronouncement, CBS News White House correspondent Mark Knoller tweeted the update from the MedStar Washington Hospital Center in written form (pictured above). 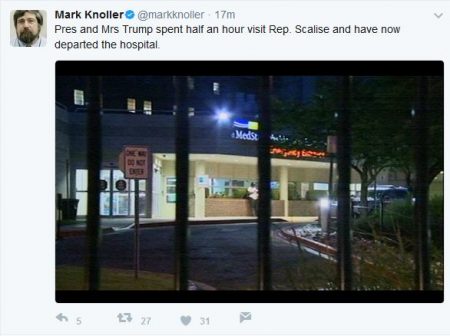 On Wednesday afternoon, a physician specializing in gunshot surgery told Fox News that the major concern in the first minutes after Scalise was injured was blood loss.  According to initial reports, Scalise was awake and coherent as he was carried away on a stretcher after EMS workers arrived on-scene.

The hospital statement indicates that Scalise will require further surgery and that he remains in critical condition.

In a tweet issued after the Trumps’ hospital visit, President Trump expressed the seriousness of Scalise’s condition while asking his followers to “pray for Steve.”