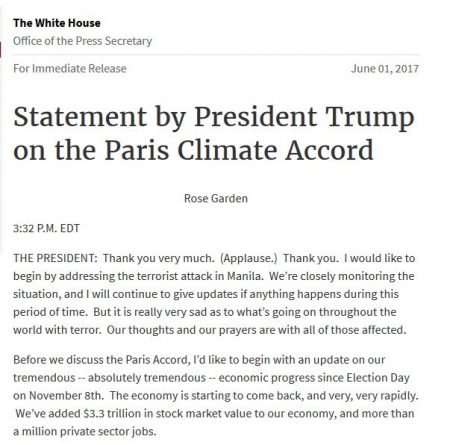 (Jun. 11, 2017) — In the wake of President Trump’s exit from the Paris climate treaty, reactions from other quarters were predictably swift, nasty, sanctimonious and hypocritical.

Al Gore paused near one of the private jets he takes to hector lesser mortals to say the action will bring “a global weather apocalypse.” Billionaire Tom Steyer got rich selling coal but called the President’s action “a traitorous act of war.” Actor-activist Mark Ruffalo railed that Trump has “the death of whole nations on his hands.” Michael Moore said the action was “a crime against humanity.” Former President Obama said it threatened “the one planet we’ve got” (to say nothing of what’s left of his executive orders legacy).

In truth, President Trump’s bold decision underscores the ill-informed science, economics, ethics and energy politics that have driven climate cataclysm caterwauling for decades. His exit decision, his insistence that NATO members pay their agreed dues for defending Europe, the impacts of widespread green energy poverty, and the hard economic and environmental realities of wind, solar and biofuel “alternatives” to fossil fuels will likely awaken other leaders – and persuade other nations to Exit Paris.

Of the 28 NATO members, only the US, UK, Poland, Estonia and Greece have met their defense spending commitments, leaving a shortfall of $134 billion a year and compelling the United States to shoulder over 65% of the alliance’s total defense spending. Germany and some other members have now grudgingly agreed to increase their payments, in response to President Trump’s request, Russia’s actions in Crimea, Georgia and elsewhere – and growing threats of Islamist terrorism.

In the wake of London, Manchester, Brussels, Paris, Orlando, San Bernardino, Fort Hood, Twin Towers and countless other attacks, it is ludicrous to claim supposedly manmade, allegedly dangerous climate change is the world’s biggest worry. It’s totally unrealistic to imagine that NATO members can pay their fair share for defending Europe and then pay what the Paris Treaty expects for the Green Climate Fund, while shackling their economies with job-killing renewable energy policies, and spending billions on welfare for unemployed workers and migrant families from the Middle East.

The Paris climate formula provides that GCF payments are to start at $100 billion per year, of which the US share would have been $23.5 billion. Former UN Framework Convention on Climate Change executive secretary Christiana Figueres has suggested that $450 billion a year by 2030 would be appropriate, Competitive Enterprise Institute energy and climate director Myron Ebell points out.

Ms. Figueres has also said the UN has “given itself” the task of replacing the free enterprise capitalism economic model with a global governance system. Her colleague Ottmar Edenhofer bluntly stated that the real goal of UN climate policies is redistributing the world’s wealth – in $450-billion-a-year increments.

Developing Countries and kleptocratic leaders demanded this windfall to join Paris. Their enthusiasm over staying in Paris is likely to reflect now-rich nation declining excitement about paying into the Fund, even though the treaty does not obligate DCs to reduce fossil fuel use or emissions until at least 2030.

German Chancellor Angela Merkel gamely said she will now work “more than ever” to “save our planet.” A number of US cities and states pledged to remain committed to treaty obligations. How exactly will they do that? Will they pay billions into the Fund – and blanket their lands with enough wind, solar and biofuel installations to be completely renewable in three decades? Build more of the only CO2-free electricity sources that are reliable and affordable: nuclear and hydroelectric facilities?

Most of these national, state and local leaders oppose nuclear and hydroelectric as strongly as they detest fossil fuels – and the states and cities are already burdened by soaring electricity prices and government debt. Virtually none have considered the gargantuan costs of this “energy transition” – or the fact that total global adherence to the Paris Treaty would prevent an undetectable 0.2 degrees C (0.3 F) of warming by 2100. Their own self-aggrandizing efforts would prevent perhaps 0.01 degrees. (And that assumes carbon dioxide is the primary factor in climate change, instead of changes in solar energy output, cosmic rays, ocean circulation and numerous other natural forces that actually control Earth’s climate.)

The United States and world still depend on oil, natural gas and coal for 80% of their total energy needs. More than 53,000 US wind turbines still supply only 2% of the nation’s total energy; thousands of acres of photovoltaic solar panels supply barely 0.3% of US energy; corn ethanol from 40 million acres (equal to Iowa or to Austria and the Czech Republic combined) supplies just 5% of its transportation fuels.

Between 2010 and 2015, global electricity consumption grew by more than 2 billion megawatt-hours (2,000 terawatt-hours). Meeting just this demand growth of 400 million mWh per year (not total global electricity demand) solely with wind energy would require installing some 100,000 new turbines every year (generating electricity 25% of the time), as nations continue to electrify their far-flung communities.

Industry and other data suggest that generating just 20% of US electricity with wind power would require some 185,000 1.5-MW turbines, 19,000 miles of new transmission lines, up to 18 million acres, and 245 million tons of concrete, steel, copper, fiberglass and rare earths – plus fossil-fuel back-up generators for the 75% of the year that the wind is barely blowing and the turbines are not producing electricity.

Now consider where all these raw materials must come from, how they must be extracted from the Earth and turned into finished products, and how much (mostly fossil fuel) energy that requires. Concrete is made from limestone, silica, alumina, iron, clay, fly ash, gypsum and gravel. Steel requires iron, nickel, chromium, manganese, carbon and molybdenum. Fiberglass is composed of silica, other minerals and petroleum. These materials and copper are mined in countries all across the planet.

Nearly all rare earth metals come from Mongolia, and lithium for batteries (to store the turbines’ electrical output) from the Democratic Republic of Congo, under horrid to nonexistent environmental, health and child labor standards. Their toxic and radioactive wastes are turning vast areas into desolate wastelands.

Those are enormous impacts – and wind turbines require some 100-200 times more raw materials per megawatt of electricity actually generated than modern hypercritical coal or combined cycle gas turbine generators. Total energy inputs to manufacture, transport and install wind turbine components are also lopsided. Just imagine the land and resource needs if all electricity were wind-generated and all cars were electric. To call this “clean” energy, “sustainable” power or “environmental justice” is simply perverse.

Think back on the incredible energy technology advances since 1917 – from wood and coal in primitive stoves, furnaces and factories a century ago … to the coal and gas turbine generators, hydroelectric and nuclear power plants, high-tech transmission grids of today. Ponder the amazing advancements in medical, computer, communication and other technologies during the past century.

Imagine what wonders our Ultimate Resource – our creative intellects – could invent over next century, if we have the freedom and capital to do so. If misguided climate change, wealth redistribution, renewable energy and global governance demands do not shackle those opportunities. If we’d stop giving decision-making authority to people who have never been in factories or on farms (much less worked there), and think food comes from grocery stores, electricity from wall sockets, “clean energy” from magic.

President Trump has been vilified for challenging “accepted wisdom” on NATO, terrorism, climate change, and the ability of wind and solar to power job creation and economic rejuvenation in the USA and other industrialized nations – and to enable poor families worldwide to take their rightful places among Earth’s healthy and prosperous people. History will prove him right.

More Rational Policies in our Future? added on Sunday, June 11, 2017