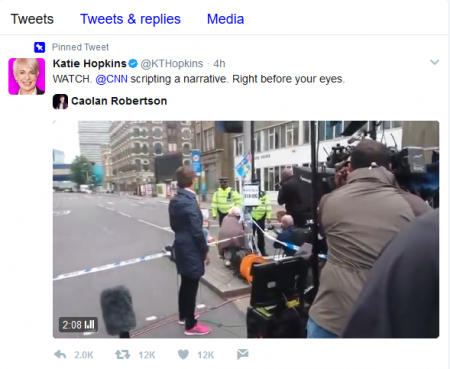 (Jun. 5, 2017) — On Sunday evening, Daily Mail columnist Katie Hopkins tweeted and retweeted video footage which appears to show a media company or companies directing men and women purportedly dressed in traditional Muslim clothing where to stand and how high to hold their signs of “protest” in apparent reaction to Saturday night’s terror attacks on London Bridge and Borough Market.

Hopkins is known in Great Britain as being outspoken and politically-incorrect.  Late last month, she was dismissed from LBC, where she hosted a radio show, after tweeting about a “final solution” in response to the terrorist attack in Manchester (UK), which killed 22 people, including children, and injured 59 others. 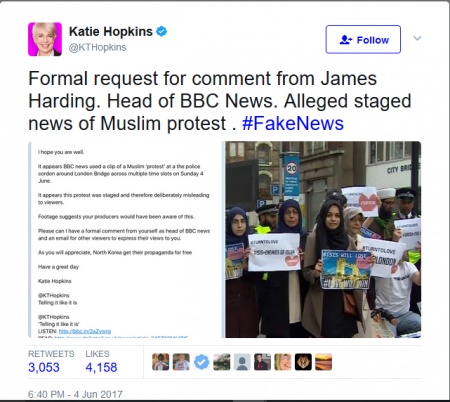 Hopkins reached out to an Anna O’Neill, who tweeted that “Muslim ladies from Harrow come to the police cordon to show solidarity with victims of #londonterror #Londonattacks” along with a still photo of the “protesters.”

As of this writing, it does not appear that either O’Neill or Harding responded to Hopkins through Twitter, and it is now the middle of the night in the UK.

The footage, posted on YouTube, is 2:19 long and appears to show cameramen and a group of “protesters” taking direction from a producer or director on a London street.  The women in the group are dressed with headscarves but otherwise customary Western street clothing and are holding up signs, apparently on cue, which say, “ISIS will lose.”

The Powerline Blog reported that the AP had tweeted a screenshot of the alleged Muslims holding signs bearing the hashtages “#TURNTOLOVE” and “#FORLONDON”.  “Attack brings out the best in London’s Borough Neighborhood,” read the subtitle underneath a photo of several men in the group with the AP’s logo.

For those not familiar with live news production, it is actually not that uncommon for hosts and producers to arrange protesters or pedestrians behind reporter to provide a varied background. Sources familiar with this live shoot tell Mediaite that the protesters (“Muslim Mothers”) were already very near the location and the Police simply allowed them to move behind Ms. Anderson and crew…

We reached out to CNN for explanation and they provided the following statement:

“This story is nonsense. The group of demonstrators that was at the police cordon was being allowed through by officers so they could show their signs to the gathered media. The CNN crew along with other media present simply filmed them doing so.”

Mediaite identifies the women in the group as calling themselves “Muslim mothers” but does not mention the men who assembled with them.

A 9:17 p.m. post from the same source repeats some of the earlier material and is titled, “Watch the Original ‘Pro-Muslim’ CNNi Segment That Outraged the Alt-Right for Being ‘Staged.’”

Neither article denies the claim that the gathering was facilitated by CNN.

In street protests seen around the globe, Muslim men and women do not assemble together when protesting, nor do they worship communally in mosques.

The terror group ISIS has claimed responsibility for the attacks, which killed seven and injured 48, some critically.

The CNN producer of the segment is said to be Becky Anderson.  Despite CNN’s obvious animus against U.S. President Donald Trump, Anderson used the word “losers” to describe the terrorists, one which Trump used approximately two weeks ago to describe the perpetrators of the Manchester attack.

A clip of Sunday’s footage, not including the time spent setting up the scene, was shown on Fox61 in Hartford, CT at approximately 10:10 p.m. EDT and was said to have depicted Muslims showing sympathy for the victims.  A man with a white Islamic cap and greenish robe was featured stating (paraphrased), “An attack on one is an attack on all.”

This publication cannot recall a group of Muslims ever voicing solidarity with Western victims of Islamic terror attacks.  In fact, it has been reported that most Muslims with knowledge of a terror plot in their communities will not report it to the police.

A response to the controversy from CNN’s Brian Stelter states that “Far-right twitterers are misleading folks about this video. Bloggers saying CNN was caught ‘staging fake news'” and “Police allowed demonstrators thru cordon ‘so they could show their signs’ to media, @CNNPR says. CNN, BBC, AP “simply filmed them doing so.”

Whether or not Stelter, host of “Reliable Sources” whose official title is “senior media correspondent,” is an authorized CNN spokesman is unclear.

The Post & Email did its due diligence and contacted the BBC and CNN on its own.

We sent the BBC an email and left a message on its Facebook page: 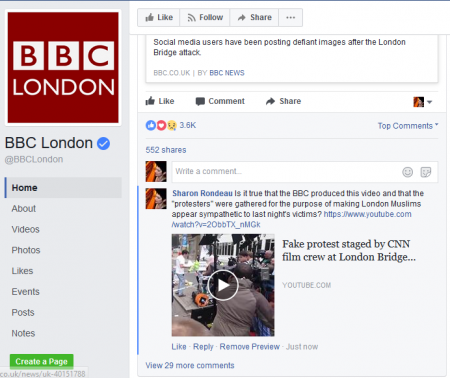 and contacted CNN through its “Feedback” portal: 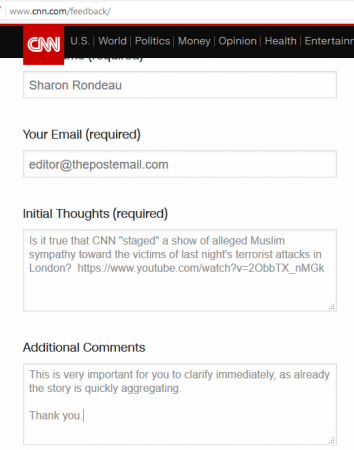 However, a short time later, the email to the BBC bounced back:

And as of press time, we have not received a response from CNN.

At 12:04 a.m. on June 5, we sent an email to Fox61 alerting them to the questions behind the full video, of which the station aired only a part on its Sunday night news broadcast.

Did the “Media” “Stage” a Gathering of Alleged Muslims in London? added on Monday, June 5, 2017

3 Responses to "Did the “Media” “Stage” a Gathering of Alleged Muslims in London?"