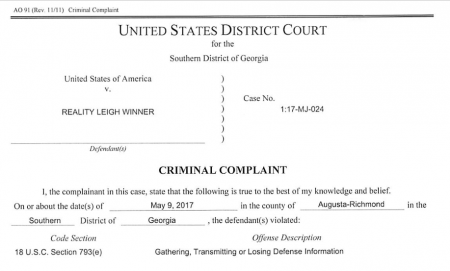 (Jun. 5, 2017) — An article published in The Intercept on Monday describing a “highly classified intelligence report” produced by the National Security Agency (NSA) served as the catalyst for the first arrest by the U.S. Justice Department in connection with the leaking of national security secrets to the media which has been ongoing since before President Donald Trump took office on January 20.

The document, a small part of which is shown in redacted form several paragraphs into the article, reportedly states that an element of the Russian military apparatus attempted to interfere in the November 2016 U.S. elections in several ways.

A second page of the report detailing in graphic form the NSA’s assessment of how certain Russian activity was conducted is virtually unredacted.

Investigations by the House and Senate Intelligence Committees as well as the FBI are investigating whether or not, or to what extent, Russia inserted itself into last fall’s U.S. electoral process.  The document in the possession of The Intercept would appear to confirm that Russia “focused on parts of the system directly connected to the voter registration process, including a private sector manufacturer of devices that maintain and verify the voter rolls.”

New revelations from the release of the document include that “more than 100 local election officials” received “spear-phishing” emails shortly before Election Day on November 8.

Many Democrats have claimed that Russia not only assisted Trump in winning the White House, but that also there was “collusion” with Trump campaign aides.  Trump has roundly denied any inappropriate relationships with Moscow, as has Russian President Vladimir Putin.

The Intercept reported that it received the NSA document “anonymously” and then verified its authenticity independently.   “The NSA and the Office of the Director of National Intelligence were both contacted for this article,” wrote the authors. “Officials requested that we not publish or report on the top secret document and declined to comment on it. When informed that we intended to go ahead with this story, the NSA requested a number of redactions. The Intercept agreed to some of the redaction requests after determining that the disclosure of that material was not clearly in the public interest.”

A press release about the arrest from the Justice Department reads, in part:

A criminal complaint was filed in the Southern District of Georgia today charging Reality Leigh Winner, 25, a federal contractor from Augusta, Georgia, with removing classified material from a government facility and mailing it to a news outlet, in violation of 18 U.S.C. Section 793(e).

Winner was arrested by the FBI at her home on Saturday, June 3, and appeared in federal court in Augusta this afternoon.

“Exceptional law enforcement efforts allowed us quickly to identify and arrest the defendant,” said Deputy Attorney General Rod J. Rosenstein. “Releasing classified material without authorization threatens our nation’s security and undermines public faith in government. People who are trusted with classified information and pledge to protect it must be held accountable when they violate that obligation.”

According to the FBI’s criminal complaint, Winner released the document to the media on or about May 9, 2017″ and that the release constitutes a violation of 18 U.S.C. Section 793(e).

Since leaks began to emerge including the name of Trump’s first national security adviser and portions of phone calls with world leaders, the Trump administration has pledged to find and prosecute those responsible.

The FBI affidavit supporting the warrant quotes heavily from Executive Order 13526 signed on December 29, 2009 by Barack Obama and published in the Federal Register on January 5, 2010.  The date appearing at the bottom of the 27-page order, however, appears as “December 29, 2010.”

According to the affidavit, Winner held a Top Secret clearance.

Paragraph 15 of the affidavit indicates that Winner admitted to having printed the document and supplied it to the “News Outlet,” which remains unnamed throughout.  “WINNER further acknowledged that she was aware of the contents of the intelligence reporting and that she knew the contents of the reporting could be used to the injury of the United States and to the advantage of a foreign nation,” FBI Special Agent Justin C. Garrick wrote.

3 Responses to "First Arrest Made for Leaking Classified Documents"