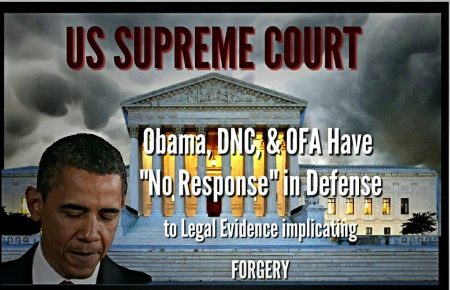 (May 17, 2017) — On Monday, Obama eligibility/forgery plaintiff Cody Robert Judy contacted the clerk’s office at the U.S. Supreme Court in an attempt to discover why his application for a Petition for Mandamus has not been docketed after more than a month since its receipt.

Judy filed an appeal to the high court in April, having received proof of its arrival there on April 13.  He also filed a “courtesy copy” with the Tenth Circuit Court of Appeals, which promptly reflected it on its docket.

His opening brief was docketed by the Tenth Circuit on May 8.

On Saturday, Judy reported an 8+-hour inability to access his case on PACER, the federal courts’ official website, although he said other cases were visible and accessible.  The problem finally resolved itself at approximately 3:30 PM MDT.

In an unusual circumstance, Judy has received no communication from the Supreme Court requesting more information or indicating that the clerks have any questions about his filing, while the Tenth Circuit docketed its courtesy copy promptly weeks ago. 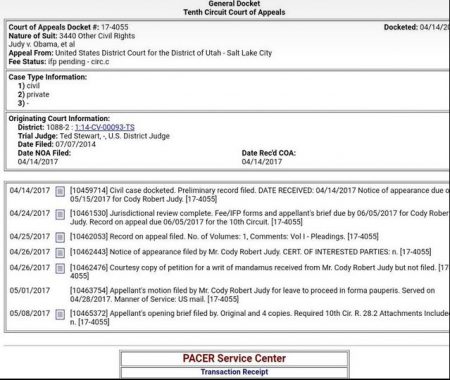 Judy’s lawsuit alleges violations of the Clayton Act and Sherman Anti-Trust Act by Barack Hussein Obama, Organizing for Action, and the Democrat National Committee (DNC) stemming from what Judy believes is Obama’s constitutional ineligibility to seek or hold the office of president, which Obama did for two terms.

After Judy’s case was dismissed by the U.S. District Court for the District of Utah and the Tenth Circuit two years ago, he appealed to the U.S. Supreme Court, where several months later, Associate Justice Sonia Sotomayor denied him in forma pauperis status.

Judy told The Post & Email that he found it odd that the Supreme Court would deny him that status when the two lower courts had approved it.  He was then unable to proceed with the case.

Judy alleges that Obama is not a “natural born Citizen,” as the U.S. Constitution requires for the president and commander-in-chief.  An additional component to his lawsuit is the allegation that by knowingly running for and holding the office of president as an ineligible candidate, Obama the DNC and Organizing for Action, Obama’s political action committee, engaged in criminal activity as outlined in the two anti-trust laws cited above.

Obama claims a birth on August 4, 1961 in Honolulu, HI to a British-citizen father and U.S.-citizen mother.  Judy’s interpretation of the “natural born Citizen” clause found in Article II, Section 1, clause 5 of the Constitution is that a birth outside of the United States to U.S.-citizen parents or within the U.S. to a non-citizen parent or parents is disqualifying.

Constitutional scholars and attorneys both agree and disagree with Judy’s view.

In 2012, a “long-form” birth certificate image posted by the Obama regime at whitehouse.gov as well as his purported Selective Service registration form were declared fraudulent by former detective Mike Zullo.

In December 2016, Zullo gave a third and final press conference capping his five-year investigation with the revelation that two highly-reputable forensic analysts conducted their own respective probes of the birth certificate image and agreed with his conclusions.

Zullo and the former sheriff who commissioned the investigation, Joseph Arpaio, have both been vilified by the mainstream media for being the messengers of the findings of forgery and fraud in Obama’s only publicly-proffered documentation.

In July 2012 following a second presser on the probe, Arpaio remarked that the forgery of the image said to represent Obama’s original birth record from Hawaii is a matter of “national security.”

The media failed to investigate, with Congress and the FBI following suit.

The new information Zullo released in December provided the impetus for Judy to refile his case, beginning with the U.S. District Court in Utah.  On April 10, Judge Ted Stewart dismissed the case for a second time, claiming that the defendants were not obligated to provide a response to Judy’s contentions.

Judy then appealed to the Tenth Circuit and U.S. Supreme Court.

On Tuesday afternoon, Judy informed The Post & Email that he received no answer from Supreme Court clerk Daniel Bickel, with whom he spoke directly on Monday, as to where his application is or why it has not been posted. Judy said he related to Bickel the tracking number of the certified receipt which was returned to him as well as the fact that the courtesy copy had been filed with the Tenth Circuit.

“SCOTUS is responsible, having received it by witness of Clerk Bennett,” Judy said, referring to the signature on the certified mail receipt.

“SCOTUS can’t bury this. They signed for it and have been notified of its existence in the 10th Circuit,” Judy said.  “That was the whole reason I sent the Courtesy Copy. There is NO REASON SCOTUS has in saying they don’t have it. Hopefully, this puts any rogue clerk in the SCOTUS in the crosshairs of obstruction of justice, and the SCOTUS without excuse!”

Similarly, an email sent by this writer on Monday to the Supreme Court’s public information officer asking about the status of the filing has gone unanswered.

Judy said that in regard to the Tenth Circuit, he has no doubt the defendants have been served with all of the documents in the case.  “The Tenth Circuit wouldn’t have docketed the Courtesy Copy without proof Defendants were served,” he said. 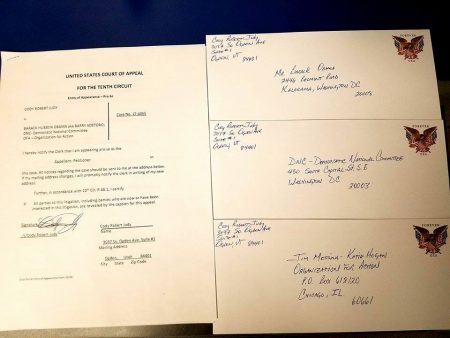 The Defendants’ response brief is not due there until June 7, Judy said.

In regard to the Supreme Court timeline, Judy said that “the 30-day period to respond is a now lost opportunity, as the day the SCOTUS received the documents is indeed the timer.”

When The Post & Email asked if it were possible that the Supreme Court clerks were attempting to “bury” his application, Judy responded, “They can’t! They are on record as receiving it, and the Courtesy Copy I filed in the 10th Circuit is admissible against their losing it… because they can get it on Pacer. SCOTUS can get any document filed in any court within minutes.”

“Embarrassment is a BIG MOTIVATOR,” Judy continued, adding, “The whole FORGERY is an embarrassment to the Nation!” 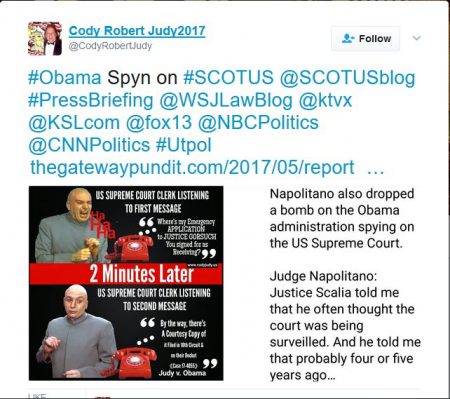 Changing the subject slightly, he observed, “The question on my mind, after reading Judge Napolitano’s statement about SCOTUS surveillances and Scalia’s statement, is WHY Obama felt the need to keep such a close eye on the Court? Could it be his office depended on them not hearing a case on ELIGIBILITY?”

Both before Obama took office in January 2009 and afterward, dozens of cases were filed challenging his eligibility to serve; all were rebuffed by the courts, most frequently on the issue of legal “standing.”

As a 2008, 2012, and 2016 presidential candidate himself, Judy’s standing to bring an eligibility case has not been challenged by the courts.

However, no court has yet granted him a hearing on the merits.

Obama, DNC, & OFA Have “No Response” in Defense of Legal Evidence Implicating FORGERY added on Wednesday, May 17, 2017

9 Responses to "Obama, DNC, & OFA Have “No Response” in Defense of Legal Evidence Implicating FORGERY"