“THERE IS NO FREE ENERGY IN THE REAL WORLD”

by Viv Forbes, ©2017, Secretary of the Clexit Coalition 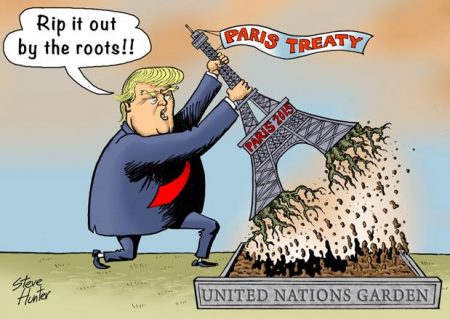 (May 17, 2017) — The Clexit Coalition today called on President Trump to keep his election promise to withdraw from the Paris Climate Treaty and stop US payments to all UN global warming programs.

The Clexit (ClimateExit) Coalition, comprising over 175 representatives from 25 countries, aims to prevent ratification or local enforcement of the UN Paris climate treaty.

The Secretary of Clexit, Mr Viv Forbes of Australia, said that all nations will suffer from the destructive energy policies being promoted in the UN’s war on cheap, reliable hydro-carbon fuels and the backbone industries that rely on them – mining and smelting, farming, fishing, forestry, processing and manufacturing.

He was supported by Professor Will Happer, Professor of Physics at Princeton University, who said today:

“Americans never felt compelled to sign up to international folly in the past. I hope the United States once again shows the common sense of its people and walks away from the Paris Agreement.”

“There is no free energy in the real world. All world leaders, not only President Trump, should stop promoting the empty game of energy poverty and deaths.”

“President Trump knows he must keep the promises made at his public rallies. For example, he made the commitment to get out of Paris in his Harrisburg, Pennsylvania speech:
https://www.c-span.org/video/?c4667776/president-trump-remarks-harrisburg-pennsylvania

“This includes deals like the one-sided Paris Climate Accord, where the United States pays billions of dollars while China, Russia and India have contributed nothing and will contribute nothing.”

Mr Forbes said that the war on natural hydro-carbon fuels is denying the poorest people and nations of the world the chance of better paying jobs, cheaper energy and more abundant food.

“There is no justification for the War on carbon dioxide – CO2 does not drive global temperature and Earth’s climate cannot be tweaked by erecting windmills or putting taxes on carbon dioxide. CO2 is naturally sequestered by oceans and the biosphere. Burning natural hydrocarbons merely recycles Earth’s carbonaceous nutrients vital to all life – already world food production and global forests have benefitted from the small increases in carbon dioxide plant food in Earth’s atmosphere.

“President Trump promised to exit the Paris Treaty, but he also needs to de-fund and exit all UN climate control bureaucracies.

“Tom Harris of the Canadian-based International Climate Science Coalition has said that the President needs to dig up the roots of Paris – the UN Framework on Climate Change signed by President H. W. Bush and others in Rio in 1992.

“The root mass of every weed is as big as its branches. Everyone knows that pruning weeds just encourages more growth from the energised roots. All people who value freedom and prosperity must eradicate the UN Climate weeds, roots and all.

“Clexit members around the world look to President Trump to add his weight to the growing momentum to withdraw from the Paris Climate Treaty and the Rio UN FCCC, and to de-fund all bodies responsible for planting these climate industry weeds.”

(Apologies to those who may oppose other policies of Donald Trump, but on climate and energy he is spot on and deserves support.)

The Legal and Economic Case Against the Paris Climate Treaty:
http://breakingviewsnz.blogspot.com.au/2017/05/christopher-horner-legal-and-economic.html

Paris Climate Agreement – President Trump should take us out:
http://principia-scientific.org/agreement-paris-climate-agreement/?utm_source=feedburner&utm_medium=email&utm_campaign=Feed%3A+psintl+%28Principia+Scientific+Intl+-+Current+News%29

Viv Forbes has Tertiary qualifications in geology, physics and chemistry and experience in coal, oil, gas, grazing, investment analysis, cycles and mineral economics and has written widely on energy, climate and politics. He holds shares in a small Australian coking coal exporter which will benefit if the war on hydro-carbons sends more Australian industries to Asia.

Kill the Paris Treaty and Rip out its Roots added on Wednesday, May 17, 2017