(May 14, 2017) — “The Internal Revenue Service is more ruthless than the Gestapo.  Abolish the IRS.  Stamp out organized crime.”  Evel Knievel

Many of our readers are aware of our continuing battle with the IRS and the many articles we have written taking them to task.  But we’re just one IRS story.  Millions, and we do mean millions, of Americans have fallen victim to this rogue, inept, out-of-control, bureaucratic agency that is relentless in its pursuit of your tax dollars to the point of abuse, harassment, blackmail, coercion, bungling mismanagement, law-creating, law-breaking, corruption and blatant criminality.  If you think you are protected from the IRS by the 4th, 5th and 14th Amendments against illegal search and seizures, violations of due process or constitutional rights, or protected against self-incrimination, think again.  Every time you sign the “Jurat” statement at the bottom of Form 1040 under penalty of perjury, you have abrogated your 4th and 5th Amendment rights and opened yourself up to being penalized or charged with a crime because the Internal Revenue Code is basically unconstitutional, complex and is rife with errors, omissions and conflicts.

Just how is it that the people can “be secure in their persons, houses, papers and effects against unreasonable searches and seizures” (4th Amendment) and how can the people not “be compelled to be a witness against himself” (5th Amendment) if the IRS can force each of us into disclosing all of our financial information (“papers”) without a warrant being issued by a judge “upon probable cause,” as required by the 4th Amendment?  The IRS has effectively repealed the 4th and 5th Amendments.

The U. S. Congress and the special-interest lobbyists are wholly responsible and complicit for what the IRS has become.  The IRS is a tool of those special interests to herd you, the taxpayer, into the socialist cattle pens where they want you to go.  The IRS accomplishes this with thousands of incentives, fines, penalties, or threats of incarceration in tens of thousands of pages of pure unintelligible “gobbledy gook.”

Since its creation out of the 16th Amendment in 1913, the IRS Act was reconstituted every two years by Congressional legislation. Then in 1939, the Internal Revenue Code (IRC) was codified into statute under Title 26 United States Code (USC).  Several machinations and revisions to the Code took place in the 50’s, then again in the 80’s and once more in the 90’s.  Congress has toyed with it, manipulated it, revised it and bastardized it at almost every Congressional session with new laws to placate some special interest group, advance some social or environmental goal, or enhance some banking, business or union interest.  ObamaCare added countless more pages of regulations, fines and penalties and increased IRS employment by an estimated 16,000 new employees.

The Congress tried to rein in the IRS by making them comply with the “Fair Debt Collection Practices Act” (1977) and later with the “1998 Restructuring and Reform Act.”  Under the 1998 Act, it was up to the IRS to prove errors, mistakes, or wrongdoing by the taxpayer.  In effect, the taxpayer was innocent until proven guilty by the IRS.  We can tell you from our own experiences that the IRS makes little effort to comply with these acts, as we pointed out to them in our affidavits.

At a rally in front of the Washington, DC IRS Headquarters on April 18, 2017, members of the Tax Revolution Institute (TRI) started to read out loud the tax code, word by word and line by line, to demonstrate the ridiculousness and sheer volume of the code.  Calculating 1,000 words per page and 2.7 words per second to read out loud, it would take a person the better part of 53 years to read the entire code, reading 24 hours per day, without breaks of any kind.  In fact, in 10 hours the TRI members were only able to read well less than one percent of the code.

The Code’s almost-75,000 pages of rules, regulations, limits and restrictions sets a hidden trap for every taxpayer who has no chance of ever understanding those rules, regulations, limits and restrictions.  Further, there is no guarantee that a tax-preparer is any more qualified than you are to prepare your return.  Even if you asked ten different IRS agents a question about the Code, you are very likely to get ten different answers.  That’s not freedom, ladies and gentlemen, that is government-instituted slavery.

For just these reasons, the Internal Revenue Service should be abolished.  But there is more.

In one of our affidavits that we sent to the IRS to challenge a tax due for two tax years, we included a set of 14 conditions to which, if the IRS responded to those conditions under penalty of perjury, we would agree to pay the tax.  In other words, we did not default on their demand (a presentment).  We made our response (a presentment) conditional on their response, thereby complying with the provisions of the Uniform Commercial Code (UCC), to which the IRS is legally bound.

In two separate tax years, rather than respond to the conditions in our affidavit, they sent us a NO TAX DUE letter.  The last four of those conditions in the affidavit are included below:

Condition 11 – Provide proof, under penalty of perjury, that the Internal Revenue Code (IRC)and the IRS booklet known as “1040 Forms and Instructions” as provided by the IRS to the taxpayer and upon which the taxpayer relies, (the “BOOKLET”) DO NOT contain any conflicts, contradictions, in-accurate or vague information that would or could lead a normal, reasonable and prudent person to improperly prepare their tax return, either by omission in the IRC or said BOOKLET, or by the IRC or the BOOKLET containing false, conflicting, or vague information.

Condition 12 – Provide proof, under penalty of perjury, that any and/or all IRS tax forms DO NOT contain any conflicts, contradictions, in-accurate or vague information that would or could lead a normal, reasonable and prudent person to improperly prepare their tax return, either by an omission or omissions in said forms, or by said forms containing false, conflicting, or vague information.

Condition 14 – Provide proof, under penalty of perjury, that by the AFFIANT signing the tax return “perjury statement”, such signing would not violate AFFIANT’s 5th Amendment rights against self-incrimination, should said return turn out to be in-accurate because the AFFIANT did or does not understand all of the tens of thousands of constantly changing tax laws contained in the IRS Tax Code.

In fact, there is no way the IRS could respond to these questions with specificity or without exposing the conflicts and confusion in the almost-75,000 pages of the Internal Revenue Code (IRC) or the BOOKLET or exposing the IRS’s negligence and incompetence.

This begs the question of why any allegedly free American citizen should be subjected to conflicts, confusions, contradictions, inaccurate or vague information contained in the tax code, or any law, for that matter?  How is it possible for a normal, reasonable and prudent person to prepare his tax return if the information he is relying upon is rife with conflicts, errors and omissions?  How is it possible for that same normal, reasonable and prudent person to ever understand what is in the tax code when even the IRS will give conflicting and often opposing answers on a question submitted by a taxpayer?

America isn’t a nation of laws, as politicians are so fond of saying.  It is a nation of slaves to law that is constantly changing or subject to a thousand interpretations.  This is not freedom.  This is pure subjugation by government-perpetrated, purposeful confusion on behalf of social, radical environmental, central bankers, corporate and union special interests.  Each American is just a number (social security number) whose lifetime earnings are pledged to pay America’s rising debt.  Your life is the collateral for that debt.  If you aren’t earning income, you are worthless to them, except for Democrat votes in exchange for government “goodies.”

For over 100 years, Americans have been led around by rings in their noses to feed a radical Progressive agenda that makes indentured servants of us all, using the ever-changing IRS tax code.

For these reasons and more, the Internal Revenue Service of the United States of America should be immediately abolished.  But since the Congress won’t do it, the job is left to the American people.

To that end and based on our intense but illuminating experiences with the IRS, we have decided to take them on with six different and specific actions, in a full court press to ABOLISH THE IRS.  If you are tired of being a slave to this gone-rogue, out-of-control, inept, bureaucratic agency known as the IRS that has no master, you would be wise to check out our efforts and add to them ….. that is, if you don’t live in fear of the IRS. 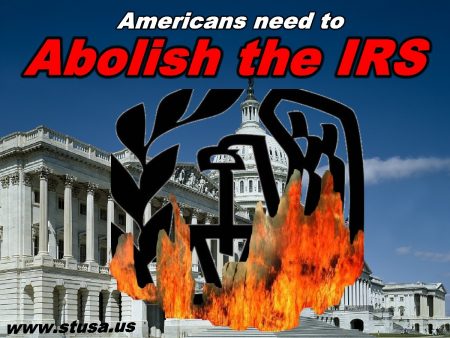 Until we get rid of the IRS, all Americans will continue to be slaves to the IRS Master in an ever-tightening noose around our necks.  Who among you will demand liberty over slavery?