(May 5, 2017) — A letter received on Friday from Tennessee prison inmate Grenda Harmer details conditions in “segregation,” or solitary confinement, in a facility owned and operated by the private corporation CoreCivic as much worse than those in state-run institutions.

As with the Trousdale Turner Correctional Center (TTCC), a newer CoreCivic institution in Hartsville, Harmer’s current surroundings at the South Central Correctional Facility (SCCF) in Clifton are described as lacking hot water and light, containing black mold and a call button which “has been removed and you can see the loose wires.”

He additionally described the cell as lacking a table and a place where clothing can be kept.

iN letters written since April 27, when he was placed in segregation, Harmer indicated that he is the object of retaliation on the part of prison staff for having submitted a number of grievances related to the lack of medical care he alleges has been meted out to him since April 5, when he arrived at SCCF from TTCC.

The relocation between the two facilities was abrupt and conducted in the wee hours of the morning, according to Harmer, after TTCC correction officers grilled him about “that woman in Massachusetts,” meaning this writer. Just before his relocation, he was classified as “pending investigation.”

“Once again I’m in segregation pending investigation and I’ve no clue as to why,” he wrote on page 1 of the four-page letter received Friday. “I’m clearly aware, as you know also, when you go against the status quo suffering will follow. It appears staff took my writing paper (most of it). Inmates wouldn’t do that because most won’t write letters. Until I’m out of segregation I won’t be able to write much due to theft of my paper.”

On April 27, Harmer was written up for “possible attempt to intimidate,” a charge he said does not exist in the Tennessee Department of Correction (TDOC) policy handbook, then placed on “pending investigation” status in solitary confinement.

Articles of clothing, personal-hygiene products and a headset were confiscated by prison staff.

As reported earlier this week, a foam wedge Harmer uses for sleeping following joint surgery and his prescription eyeglasses have not been returned since SCCF medical staff took possession of them on April 5.

Harmer submitted a grievance about the confiscated equipment on April 7.

His prescription Prilosec, Terazosin and Naproxen were reportedly not reordered, placing his health at risk.  Terazosin facilitates a necessary bodily function, the absence of which Harmer logically said will eventually lead to his death.

In late February at TTCC, the medications were withheld but restored beginning on March 17.

“In regards to my medication you can see my Prilosec is still good,” Harmer wrote at the bottom of page 3, meaning that the prescription is still current. “Yet they refuse to give it to me…”  To prove his point, he enclosed what appears to be the label from a prescription bottle containing his name, the generic name for “Prilosec,” medication description, and Harmer’s former facility. 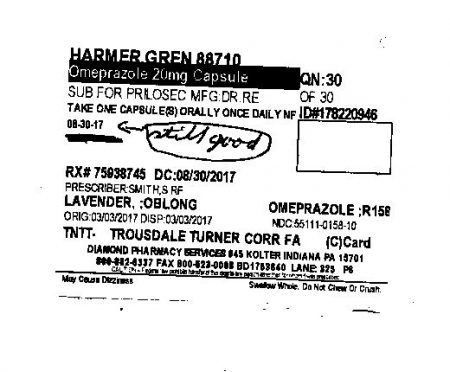 According to Harmer’s earlier letters, the segregation was to end today, May 5.

After arriving at SCCF, Harmer was told he would be able to see a doctor within two weeks.  It has now been four weeks.

Notes from Segregation added on Friday, May 5, 2017