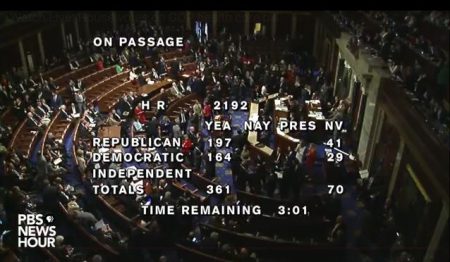 (May 4, 2017) — At 1:53 p.m. EDT, the U.S. House of Representatives is casting electronic votes on three bills, the first of which is to cancel the exemption to Congress and their staffers from the Affordable Care Act, also known as Obamacare.

TruePundit and The Boston Globe are providing live streaming of the process.

Just before the deliberations were brought to a close by the House Speaker Pro Tem, Speaker Paul Ryan was finishing making his remarks as to why he intends to vote in favor of the bill to replace the ACA,

If the new health care measure passes the House, it is expected to undergo changes in the Senate.

Sources reported that the House vote is anticipated to be “very close” on the new health care bill and supported only by Republicans.

In 2010, the ACA was passed without a single Republican vote in the House or Senate.

Whether or not the ACA and its possible replacement bill are constitutional is still debated in some circles.

The second bill to receive a vote was HR 1628, the new health care proposal termed the American Health Care Act of 2017.  Five minutes was allotted to voting as opposed to 15 on the first bill.

At 2:17, an uproar arose in the House after voting stopped with 217 Republicans reported to have approved it.  Two hundred thirteen Democrats opposed it.

The proposal was amended from its March 24 version which ultimately did not receive a vote since Speaker Ryan determined that it did not have enough support to pass.

Republicans claim that Obamacare is collapsing upon itself from a lack of sustainability, while Democrats say Obamacare is working.

Two resolutions and an approval vote were recorded prior to the three “HR” measures.

The House is out of formal session until May 16.

Update, 2:51 p.m. EDT:  Trump promised a celebration in the Rose Garden if the health care proposal passed which Knoller tweeted will commence at 3:30 p.m. 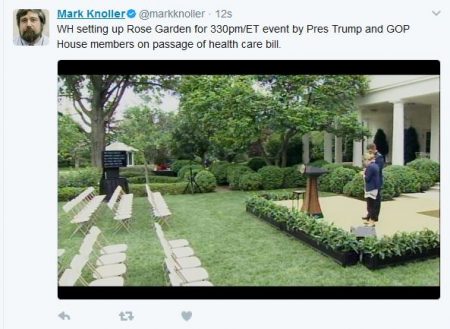