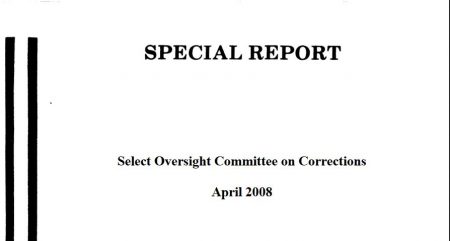 (May 2, 2017) — A 2008 “Special Report” filed with the Tennessee Comptroller of the Treasury, Division of State Audit conceded that there existed “a history of a high level of violence” at a privately-run facility.

The prison identified was the South Central Correctional Facility (SCCF) in Clifton, one of now-four private prisons in the state run by CoreCivic, formerly known as Corrections Corporation of America (CCA).

Tennessee law allows for only one private prison in the state.  The newest private facility, TTCC in Hartsville, Trousdale County, has been explained by Dave Boucher of The Tennessean as “something of a pass-through” by means of state funding going to the county, which then compensates CoreCivic.

Hundreds of letters received from inmates and emails from relatives sent to this publication over the last year overwhelmingly agree that CoreCivic prisons are much more dangerous and offer inferior medical care to their state-run counterparts.

Tennessee’s government-run prisons have experienced gang violence and the smuggling-in of contraband, according to a number of inmate reports.

Inmate Grenda Harmer, who has lived in both state-run and CoreCivic-operated prisons in the state, told Tennessee Rep. John Ray Clemmons in a formal letter that the latter require greater oversight than the former.

During the 2017 legislative session, a proposal to reauthorize a prison oversight committee within the legislature failed to gain traction.

In researching Tennessee’s prison system, The Post & Email found that in 1982, a federal judge declared aspects of the state’s prisons “unconstitutional” (p. 7 of PDF) after which he ordered federal oversight through a “Special Master.”  In 1985, the Tennessee legislature created a “Select Oversight Committee” which consisted of seven members from each chamber to “help ensure that new programs will achieve their intended purposes, to help ensure that new facilities are needed and are designed properly, and to help ensure that the General Assembly and the public can have confidence that the state will deliver a correctional system which is effective and efficient.”

None of the links referring to the committee’s work in 2009 and 2010 remains active, but instead revert to the website of the 2017 legislative session.

According to The Tennessean on April 10, the special oversight committee “was disbanded in 2011 under pressure from then-Lt. Gov. Ron Ramsey.”

The report is corroborated by a March 2011 article in Nashville’s “The City Paper.”

After an incident last month in which three correction officers at the state-run TCIX prison were injured, with one taken hostage for several hours by inmates, several Democrats in the legislature called for an oversight committee but appeared to make no reference to its previous existence.

The Tennessean quoted Rep. Mike Stewart as having said of TCIX, “There’s a long history of violence in this facility, we have been trying to exercise oversight.”

The Post & Email has been told by Tennessee Department of Corrections (TDOC) Communications Director Neysa Taylor that the reports we have received from inmates about violence are “inaccurate.”  CoreCivic has declined to comment or respond to correspondence about conditions within its institutions.

Current Lt. Gov. Randy McNally, formerly a state senator, told The Tennessean that a Senate subcommittee currently oversees the state’s prisons.  The “State and Local Committee has a corrections subcommittee that meets regularly and holds hearings when needed. I am confident in their continuing ability to provide the oversight the people of Tennessee demand,” McNally was reported as having said.

Years ago, The Post & Email contacted McNally and a fellow legislator whose districts included Monroe County, where systemic corruption was found within the sheriff’s department, the judiciary, and grand juries, resulting in deprivation of civil and constitutional rights of all citizens and indicative of a wider prisoners-for-profit scheme later found to be in place throughout the state.

Harmer’s letter written last week to Clemmons, who appeared to advocate for the safety of both inmates and correction officers in his response to the TCIX incident, reads:

[Editor’s Note:  Some sections of the letter have been withheld for the inmate’s safety]

As The Post & Email reported earlier on Tuesday, Harmer has been denied his eyeglasses and a foam wedge for sleep comfort since his arrival at SCCF on April 5, with essential prescriptions withheld as of April 27, when he was abruptly placed in segregation on the allegation of “possible attempt to intimidate.”

“I stayed on a piece of steel for about 6 hours freezing,” he wrote in a letter dated that day.

For those unfamiliar with conditions within U.S. prisons, a March 2015 article published by the FortuneSociety.org provides a chilling account from a former Rikers Island inmate under the title, “You Can Judge A Society By How Well It Treats People In Its Prisons.”  The unnamed author wrote, in part:

I was there. I spent 15 years inside, more than 11 of them in maximum-security prisons. I recall seeing incidents of violence exacted against individuals by guards, and I heard about it from victims, witnesses, and through the grapevine, which included officers and civilians. I recall a time when I was on Rikers in the “bing” (solitary confinement). The guy in the cell next to me had an argument with an officer. They slung verbal insults at one another before the officer capitulated and walked off. In the wee hours of the morning, I was awakened by the screams of my neighbor as guards were beating him –almost certainly for the earlier verbal exchange. The next day it was business as usual. My neighbor didn’t even go to the infirmary, although he confessed to having been beaten pretty severely.

When I was transferred upstate, the saga of violence continued. It was not uncommon for an individual to be handcuffed and kicked down a flight of stairs, have his head rammed into a wall, or to be beaten with batons until bones were broken. I recall being in a prison near Syracuse where the winters are brutally cold. On multiple occasions, a few guards would open the windows and leave them open for hours because someone had not complied with an order, a radio was blasting, guys were talking too loud, or someone had cursed at an officer. In a prison near the Canadian border, in a unit where people were housed in transit, guards would not only open the windows, they would sometimes secure a hose and spray individuals with cold water…

A huge part of the problem is that the system perpetuates itself. There is little scrutiny of what transpires inside prison. When abuse happens, what is an incarcerated person to do? Grievance programs are incapable of addressing these issues; supervisors often don’t care or will not reprimand their officers for fear they will be perceived as coddling to “inmates,” and other staff simply turn a blind eye because it’s clearly not in their interest to report abuse. Although these callous acts of violence are usually carried out by a select few, even those who don’t condone the violence are powerless to stop it. Moreover, despite evidence of unprovoked patterns of abuse and systemic violence perpetrated against people in prison, the unions that represent guards always insist that inmates are violent and that guards employ only the amount of force that is necessary to quell a situation…